the voice of reason

Home » Editorials » the voice of reason

the voice of reason

Winter. I hate it - tons of free time on your hands with dark winter evenings for boat projects, but as always the weather / life stops everything. (I am writing this with storm Eunice howling around.) I was supposed to be making a new canopy but the supplier sent the wrong stuff (working from home and Covid - delete where applicable). I also wanted to finish and improve the idea of using vinyl wrap, but the three days I took off work were swallowed up by storm damaged tractor shelters / life in general and anytime I set aside for the boat was usually trumped by some other domestic event. To the point that I have developed a ground-breaking archaeological theory on King Raedwald – he of Sutton Hoo fame. The only reason he is buried in that boat with all his worldly goods is he NEVER got the chance to enjoy the damn thing whilst he was alive! I bet his weekends were also spent trying to fix his house, get a better deal on his horse insurance and declaring war on his neighbours when all he all he really wanted to do was have an hour or so to himself and apply Stockholm tar to his garboard plank. God, I know how he felt, if the only chance I am ever going to get to use this boat is bobbing about in Valhalla in the afterlife with my socket set and Leatherman knife laid out by my side then forgive me if I skimp this article short and re write my last will and testimony. Sorry no one gets anything. I spent it all on a digger!!! 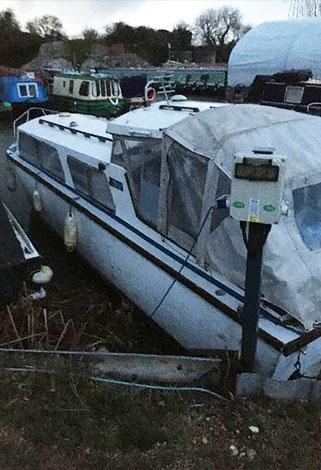 Oh well, I suppose I had better regain some grasp on reality, and even your average Viking didn’t use the boat during the winter, much preferring to hole up somewhere, pull the boats out of the water, stock up on booze and food and wait for spring. Indeed, I remember a time when all boating roughly followed suit from October, to re start again at Easter. Indeed, many vessels buried under a heavy-duty tarpaulin (not the flappy things you buy now that rip in a force 3) away from the damaging weather, all items removed for storage to the garden shed at home standing a better chance to be eaten by mice, which amuses me seeing as we don’t get many on the Kennet and Avon so its better off on the boat.

Anyway, the Vikings had one major advantage over modern man, they couldn’t read and write (ok runes but hardly Wordsworth) so they weren’t subjected to / inspired by a plethora of glossy boating magazines and their ten best winter projects - suitable only for a central heated shed. Followed closely by 10 best buy items of clothing to ward of hypothermia whilst you try. Though an article about winter pillaging in the warmer climate of the Med might have grabbed their attention, as the thought has crossed my mind. Certainly, more appealing than ten best winter cruises to Bath in sub zero temperatures inspired by Shackleton’s voyage. Somewhere or somehow over the last twenty years we have lost our grip on the reality of winter and expect it to be an extension of Autumn as the mainstream media photograph a daffodil in February (usually a variety that flowers in February) to underline the fact that its warm and pleasant and we should be out there.

The Vikings had a point, maybe they knew that even the so-called rapid set, stick anything “large hairy primate glue” only works rapidly in the warmer climate of tropical Africa where they come from. As for water-based paints, seeing as I have just bought a litre of coloured water, one would have thought that it would have found a little bit of morning dew a doddle to stick to, but it doesn’t. Everything needs at least 12 hours of sunshine / warmth, and we only have eight. As for flexible sealant – it isn’t when cold, it won’t even come out of the tube without breaking your wrists desperately trying to squeeze a plastic trigger that snaps, and even when it does finally emerge it needs a clean dry surface. All this and burning a bottle of gas through the Propex to keep warm whilst trying to work and draining the batteries by having every light on so you can see what you are doing, and taking the solar power 4 weeks to top them back up.

Vikings knew all too well, winter at 52 degrees north basically starts at the end of November and ends in April, it's cold, dark, wet and windy and anything you try to achieve will just mock your efforts until finally you break your mental mooring tether and drift further away from all sense of reality.