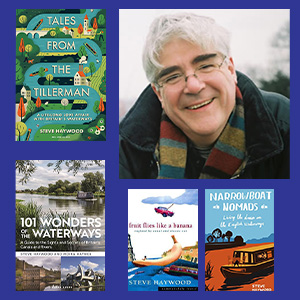 Steve Haywood wrote his first canal book against the strong advice of his agent. She didn't think there was enough interest in canals to make it worthwhile. Harper Collins had just published his first novel as part of their renowned Crime  Club imprint. She thought he should stop messing around and write another.

Steve disagreed and in 2001 his first canal book was released to an indifferent audience. "It flopped," Steve said. "It's a great book but it needed promoting. Instead they gave it the rubbish title of 'Fruit Flies like a Banana'..."
Read More