king of the vandals

Home » Editorials » king of the vandals

king of the vandals

Hi Devid Scowcrovich, King of the Vandals, here. Now we are an ancient tribe. It is believed we migrated from Scandinavia to Silesia in c.130 BCE and later spread all over Europe and Wolverhampton. Not sure what BCE is but I suppose it might have something to do with the old British Waterways (BW). How, some of us, who had nothing but criticism for BW, long for the old days, long to have the system back to how it was, the occasional non-working lock not whole flights. Canal breaches: emergency matters entailing national appeals not yearly occurrences and dam bursts unheard. Now everything that goes wrong is blamed on us. 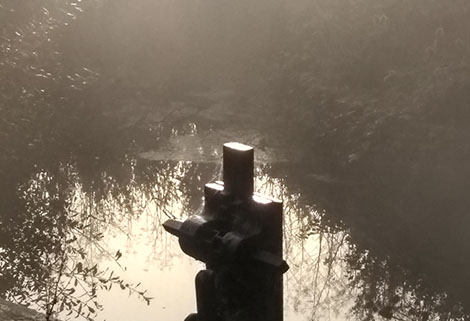 Well I am here to tell you that not everything that fails is due to Vandals. Yes, we have young warriors, bored by the lack of the things to do and worlds to conquer. Yes, the droll young bloods will damage the odd lock, I remember myself at 18 setting fire to Factory Locks outside Birmingham, but that was just bad temper and heartbreak as I had just been dumped by Junius, my girlfriend. My Queen of 47 years says I have to move on, but I am not sure.

Most people in the old days called us the "Lugi", which probably means "The Wanderers” no not Bolton Wanderers try and stay awake at the back. Very appropriate for those of us, who are  Continuous Cruisers, an insult name given to us in CE2000 by some forgotten hero. In fact, my best mate, the one who scrounges most money, is still called "Lugi".

Alright some of us, when young, played fast and loose with canal infrastructure mainly to impress the young girls in our company who need constant amusement or they will go off and become church goers, traffic wardens or decent members of society. But most of us Vandals are content to sit around the fire (not the Factory Locks, again) and tell tall stories of golden canal days when the most valuable visitors moorings in Londinium and Aquae Sulis were not clogged with overstayers (sorry people in need of respect). ‘When men were men, women were women and little green monsters from Alpha Centauri were little green monsters from Alpha Centauri’, now those little green monsters have over 100 different genders and missionary positions are vanilla and looked down upon – quite right I suppose. 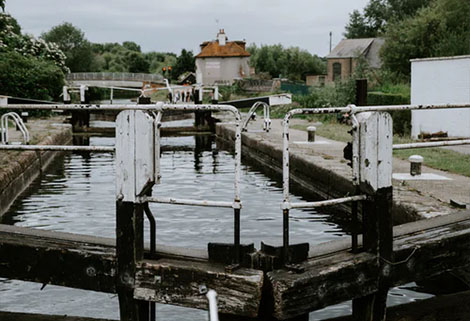 It was the same in 455 with the sack of Rome: we got the blame, but all we did, when on a John Bloom holiday, was, we Vandals accepted Pope Leo I’s free offer to plunder the city but not harm the population. Which is what we did, carted everything we could find back to jolly old Blighty. It was not the Vandals who slaughtered the men and did nasty horrible things to the women it was the Huns and look where they ended up - terrifying Europe.

Just to show it is not us Vandals that are a menace, let me explain a couple of points, or ‘Mansplaining’ as my wife’s friends call my words of wisdom.

If a lock flight empties each and every night that is not "Lugi" and his mates popping out for a bit of mischief. No, it is lack of sustained maintenance, lack of expenditure and higher management’s non-interest in boating. The Wigan flight (Coccium locks), The Aston Locks, (Estone flight), the Wolverhampton twenty-one (Wulfereēantūn XXI) all suffer from the same problem. If you travel early in the morning ‘Sparrows Fart’ or as my queen says ‘too bloody early’ you will find empty pounds and low water levels often preventing you navigating or crossing a lock cill.

There is a conspiracy theory that it is all part of higher management’s plan to restrict boating from 9 to 5, April to September. That cannot be right, can it? The bosses of a charitable trust would not devise anything so dastardly a plot, would they? One thing it is not, it is not us Vandals. You can tell when it is the fault of "Lugi" and his mates, for they spray paint their names over their work. Sometimes the names are spelt correctly. When it is the fault of management, they issue a Press Release, blaming us. 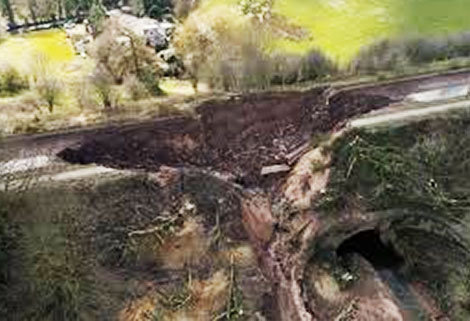 Now, canal breaches – Vandals. No, they are not. Dutton Hollow Breach (Duntune Cock-up) and Middlewich Breach (Mildestvich Fiasco), management were warned by boaters, (sorry I am lowering the tone by mentioning that word) and local residents (Community Charge payers; (Praecipe pugnam Community)) had warned for years that the bank was leaking. Nothing was done, remedial work would have cost thousands but the breaches cost millions.

My Granny said, ‘Praestat cautela quam medela - Prevention is better than cure’ and she had never been on a canal. Reported to the Police on a towpath, yes, but not actually on a canal. On the Towpath, Granny would have met a Lengthsman checking his/her/it/they/Mx length of canal for faults, expensive yes, but not as expensive as a canal breech. The Lengthsman (sorry Lengthsperson, Ed, please check current fashion bandwagon) has long gone – like Granny.

And Dam bursts, well, even the official report blames insufficient and occasional maintenance, no mention of Vandals to be found. We had many reports of how hard people were working, the wonderful emergency services did as you would expect - wonders. Even my old mob, the Army (lots of Vandals in the Army) helped out. However, in all the management reports, Press Releases and Bullshit informative videos I did not see mention of compensation for the local  residents.

​So, please let’s have no more mentions of the tribe of Vandals destroying the Inland Waterways system; management are operating that all on their own, they do not need our help. Let’s stop calling security equipment by the name of ‘Anti-Vandal’ and call it by its real name ‘A waste of time and effort’. Remove it all and I might be able to complete locks quicker.

Management: find a new tribe to blame your problems on - try - ‘Boaters’.