Home » Editorials » bubble screens, who would have thought?

I met up with an old colleague of mine Gavin Beat, who has moved on from the Canal & River Trust to join Frog Environmental as a Senior Technical Specialist. This role involves delivering innovative environmental management, pollution control and sustainable water quality solutions. This month, he has taken the time to share his knowledge and use of using bubble screens in waterbodies.

What is a bubble screen? 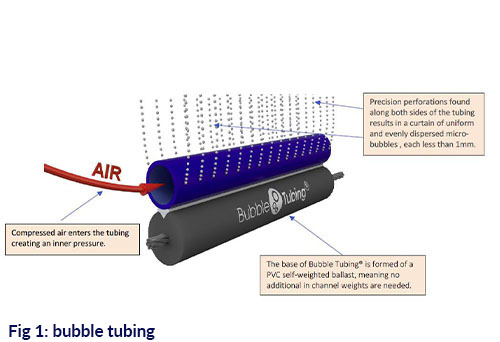 For the uninitiated, a bubble screen is created by placing BubbleTubing® (a weighted perforated tube) on the bed of a waterbody and pumping compressed air through it. The bubbles rise up through the water column until they burst at the surface. The diagram (figure 1) shows a simple bubble screen in operation.

How do they work?

It’s a simple technology and I thought you’d all be interested to know where it has already been applied in the canal environment, so we’ve enclosed a few case studies on the first four bullet points.

Silts being stirred up as a result of maintenance work such as dredging and restoration can have a detrimental impact on downstream water quality and ecology. The agitation of canal sediments cause the water to become discoloured as sediments are re-suspended in the water column. As the sediments settle, plants and gravels may be smothered, leading to a loss of biodiversity. Resuspension of sediments can also cause a temporary increase in nutrients as well as a reduction in dissolved oxygen levels.

There is great potential for the use of bubble screens in our inland waterways but as yet this has not been exploited. Gavin sees great potential in using BubbleTubing® as a management technique to divert silt build up from critical areas – potentially reducing or even removing the need for spot dredging at key locations. 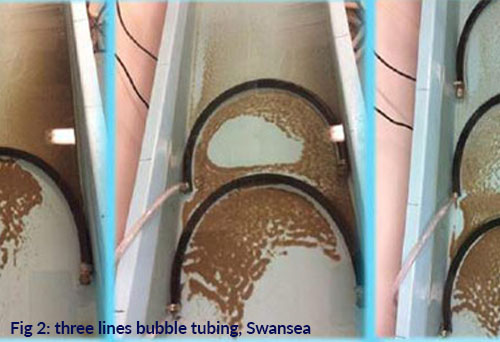 A research study conducted by Callaway et al (2018) at Swansea University deployed bubble tubing to 3 channels. One channel had one bubble tube, the second channel two bubble tubes and the third channel contained three lines of Bubble Tubing®. The set up is shown in Figure 2.

The results showed that one line of BubbleTubing® stopped around 50% of the silt from passing, whilst 3 bubble lines trapped up to 90% of silt which could then go on and settle out as sediment. Observations in the field showed that high flows can limit the curtain efficiency and it was not possible to entrap the very small clay particles. Overall, the use of BubbleTubing® to control site showed a positive impact.

Natural Resources Wales have supported the testing of bubble curtains for use in river systems to help control silts dislodged during maintenance operations. A key trial site was the River Rhymney at Ystrad Mynach where the BubbleTubing® was used to reduce silt transfer downstream during maintenance works. 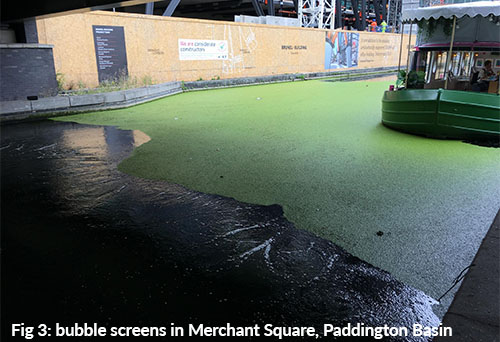 As a result of the studies, Operational teams in Natural Resources Wales are now equipped with several sets of bubble screens. These are typically deployed for use when carrying out works in water, including bank protection and de- shoaling.

In Merchant Square, the managers of the London Paddington Basin have installed bubble curtains to prevent weeds and litter moving from the canal into the Basin, whilst allowing the free movement of boats at all times. As an added bonus the aeration from the bubbles helps to improve water quality too. Figure 3 shows where a bubble screen has been installed under a bridge, preventing the spread of floating weed and potentially litter. 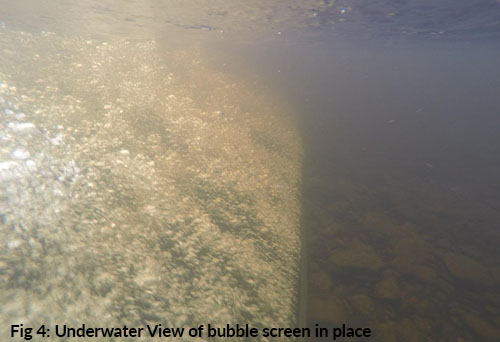 Abstractions from lakes, rivers, estuaries and the sea are critical for many industries including agriculture, wastewater and  power generation. Whilst all abstractions should be licensed, they can present a risk to local fish populations and often require a high level of maintenance clearing debris from screens.

Bubble screens can be deployed around abstractions to prevent debris from being drawn into the abstraction,  whilst at the same time discouraging fish. At Hunterston Power Station in Scotland - Coast Works deploy bubble screens on an annual basis as a physical and harmless barrier to prevent jellyfish from clogging the water intake pipes of a nuclear power station. The barriers prevent harm to the jellyfish and disruption to power supply. Figure 4 shows an underwater  perspective of a bubble barrier in operation.

We all know that the air contains oxygen, but did you know that water does too? In water we measure dissolved oxygen in   the percentage saturation or in oxygen concentration using parts per million (ppm), which is equivalent to milligrams per   litre (mg/l). Standards for dissolved oxygen are outlined in ‘the Water Framework Directive (Standards and Classification)   Directions (England and Wales) 2015 regulations’. 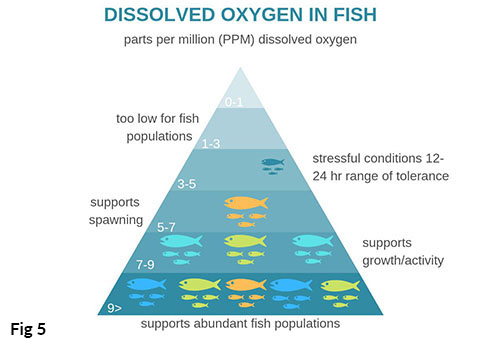 The most important thing to remember is 100% or over 9 mg/l dissolved oxygen represents the best, most saturated water, 10% or below 1 mg/l shows very little or no dissolved oxygen (anoxic) conditions. In the UK we are striving to achieve ‘good status’ for our waterbodies.

Aeration is the process of adding oxygen to the water using compressed air or in more extreme cases using peroxide. The process of aeration can benefit the aquatic environment by reducing the amount of nutrients released from the sediment under anoxic conditions. As a result, the algae cannot proliferate as the excessive nutrients aren’t available, natural processes resume and a more natural aquatic environment prevails. 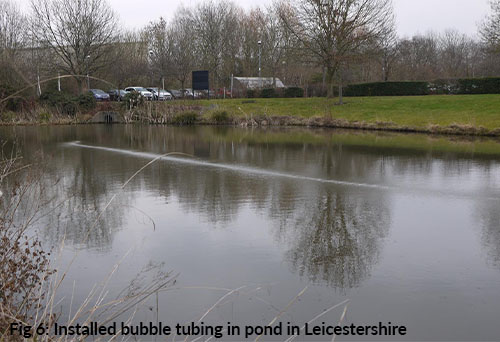 In February 2019 Frog installed BubbleTubing® to a large pond that suffers from these issues and it will be interesting to monitor how the lake responds throughout this year. Please see Figure 5 which shows their most recent installation.