As the weather begins to warm and more boaters get their ‘babies’ out of hibernation ready to cruise the cut, I thought I’d share with you a little snippet of ‘Breaking News’ I’ve come across.

Many of you ‘old hands’ at the tiller (hopefully all of you!) will be familiar with the Considerate Boater on Willow Wren Training’s website. If you’re not, or are new to cruising the canals, please take a look.

Anyway, this isn’t about the Considerate Boater – I just like to plug better behaviour by boaters at any and every opportunity. Only this last week I had the pleasure of wearing a hot cup of tea courtesy of an inconsiderate boater barging about as though he (sorry, but it’s true) owned sole rights to the waterway. My tub is not a lightweight piece of kit, but she bobbed about on his wake like an abandoned bottle cork caught in a westerly wind. OK, slight exaggeration there, but I’m sure you’ve all come across a similar situation at one time or another.

So – you may be wondering – what is this riveting piece of news?

new book on its way

I have it on good authority that another RYA Inland Waterways Instructor is about to launch a book: “Care-less Cruising on the Cut : 7 strategies to help avoid careless cruising on the canal and become a care-less cruiser”©

Fair dues, that may not strike you as the most ‘need to know’ information going, but I offer it to you in the spirit of us all needing to be doing whatever we can to make our inland waterways safe and pleasant places for all users in all places. With – dare I say this – Brexit almost upon us at the time of writing, we could find ourselves amongst an increasing number of ‘newbies’ aboard boats who haven’t yet got fully to grips with being on the water. There could be mistakes made – monumental ones in some circumstances. It’s incumbent on us all to be kind to each other; help those who are struggling; and keep the cut or river running smoothly.

And on that note, I hope you will bear with me whilst I make another little plug – this time for restoration of our canals. There’s lots going on that sometimes doesn’t get the time or attention it deserves. It’s not all big money invested by C&RT repair jobs either. There are small, medium and great big groups – often volunteer led – raising money (often BIG money) wherever and whenever they can to increase the access of boaters, anglers, walkers and bikers to new and restored waterways. C&RT have a Facebook group dedicated to all aspects of restoration. Do take a look.

To round up today’s Tales from the Towpath, I’d like to tell you about my recent cruise along the cut and observations on towpath users' behaviour – specifically fishing.

Just to be clear, I firmly believe canal cruisers and towpath users can live alongside each other harmoniously. As a boater, I will always drop to tick-over in advance of approach to an angler and take the centre of canal position (assuming there is no obstruction to prevent me from doing otherwise). If there is some reason I can’t do this, I will stop and stand-off allowing the angler to get their rods to a safe space, before proceeding further. My expectation is that the angler will see my tub approaching (let’s face it, 57’ of steel isn’t too difficult to overlook!) and make preparation to get their rod out of the way. Win:win.

But what if those fishermen aren’t using rods?

a new way of fishing

In February I came across a breed of fishermen I hadn’t met before – they were Magnet Fishing. They didn’t have the same impact on my thought processes as a rod holding angler would have. To be honest, they just looked like a bunch of kids – albeit supervised by an adult – pond dipping, as many of us have done over the years (though usually to catch tadpoles in stagnant pools). Out of courtesy and because I wanted to ask what they were doing, I slowed down and effected a ‘stand off’ position mid-channel. It was only then I saw the heap of ‘treasures’ they had recovered from the canal. Tins, bikes, shopping trolleys, you name it!

To say I was impressed is an understatement. Those kids were being taught conservation albeit that they perhaps thought they were just having a bit of fun. What an excellent way of spending a sunny day; cheap, interesting and above all else keeping the cut clean. Recently along the Sankey canal in Merseyside, a group of magnet fishing folk retrieved a veritable stash of goodies from the canal, including a motorbike with ignition key still in situ. The question is, what do they do with these ‘catches’ when they’ve finished?

I sincerely hope it’s neither of the last two options. I can confidently say the Sankey clean-up was dealt with in a most appropriate manner. 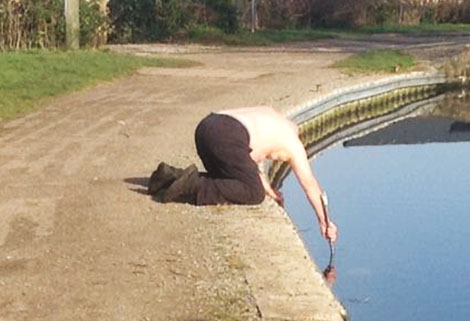 One last titbit I’ll share with you from the February cruise. Skipper was so impressed with the magnet fishing approach to canal clearance he decided to give it a go himself. First he demonstrated the impressive art of dropping his phone in the cut, by bending over with it in his shirt pocket. Personally not a skill I feel motivated to acquire. Then – in the absence of a magnet – he tied a colander to the sweeping brush with a dog poo bag and began to task of retrieving his phone from the (by now) murky depths of the canal.

Was he successful? No, of course not. Had it been my phone dropped in the water, all sorts of mirth at my expense would have ensued. As it was, he simply stated ‘ah, well’ and we moved on. I don’t think this will feature in his 7 tips for care-less cruising!