London’s live music scene had problems long before covid. Back in 2009, when my then 89-year old Tante Rosie’s health began deteriorating and my trips to London started becoming more frequent, the boom in real estate prices was already impacting the music industry. As flats had gone up, pubs and venues closed down. In 2016, Mayor Boris Johnson commissioned a live music task force to address the problem. 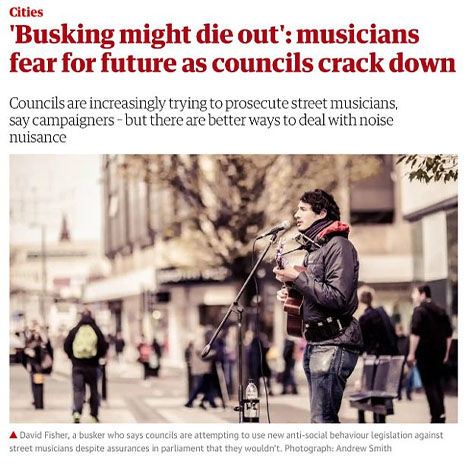 By 2015, street corners themselves were closing: proliferating Public Space Protection Ordinances (PSPO’s) banned buskers — practitioners of the world’s “second oldest profession” — from the city’s most popular pitches.  Boris Johnson, still Mayor of London, created a Live Music Task Force to address the problem.  The City’s 100-mile canal network did not figure into their proposed solutions.

Don’t ask me why.  As someone who would eventually sell a house in Texas to keep his new widebeam afloat, I was used to Austin, where even petrol stations and Burger Kings host musicians. But here in London, on the watery arteries that were my new adopted home, all I heard was the chatter of Coots and two-stroke Lister engines.

When the Royal Borough of Kensington and Chelsea banned amplified music on Portobello Road in July 2019, I offered my boat — a widebeam kitted out with full-length stage — to buskers for gigs adjacent to the patio of the Union Tavern in Ladbroke Grove.  The pub didn’t pay.  The customers didn’t tip.  But the musicians came back anyway.  All month long.  For the sheer novelty of playing on Molly Anna. 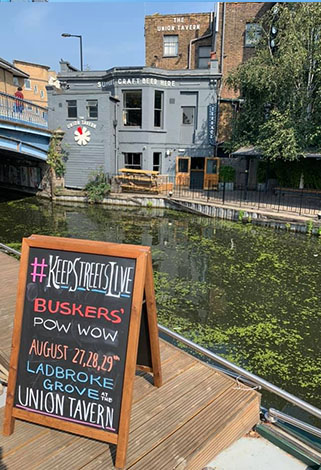 How do you harness that energy?  How do you put together the world’s largest collection of aspiring performers with discriminating audiences?  In compliance with Canal and River Trust rules that limit you to audiences of 12 and acoustic music?  And post-Covid, how do you do it on a scale that addresses the fact that venues which successfully evaded gentrification remain shuttered?   And will be shuttered again, as a first precaution authorities take when a novel virus next spreads?

Brigadoon! is our answer.  Not the mythical Scottish Highland Village that appears every 100 years, nor the Broadway musical with Gene Kelly who stumbles upon it during a love-struck hunting trip, but a flotilla of canal boats that manifests every two weeks, somewhere along the city’s labyrinth, weaving a magical atmosphere of music, theatre and public discourse, unlocking a new potential for London’s old canals.

Last September, when Covid concerns were peaking, and the biggest controversy in London was whether to close the pubs an hour early, we debuted the World’s Smallest Canal Boat Festival at tiny Mary Seacole Park in Harlesden.  Between the time of our application — when gatherings of 30 were still allowed — and the date of the event, the limit shrank to 6.   In true show biz fashion, however, the show went on.   Copper Viper, Amy & the Calamities, Bozard and Scratch Theatre performed for... well mostly for themselves, really.  And a dozen onlookers from the Mitre Bridge who’d gathered for a historical tour we'd organized of nearby Kensal Green Cemetery. 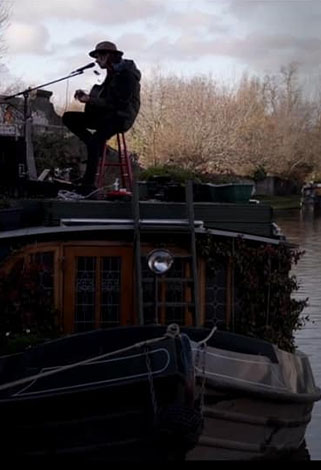 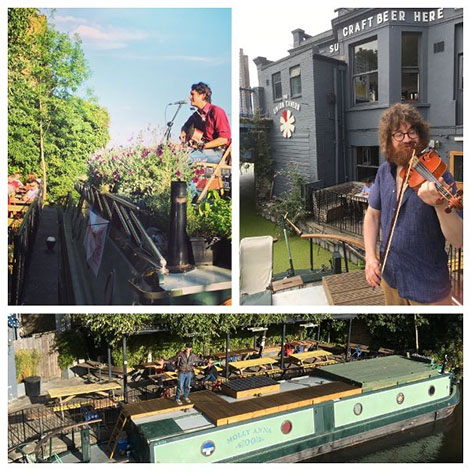 It took months to organize an event that few beyond the performers attended, but it proved the concept: The first time you debut performance at a 220-year old canal side location is a pain in the ass.  It’s much easier the second time, when all of the entities: the Canal and River Trust, whichever borough you’re in and the Met Police have seen it before.

So — although the government hasn’t announced whether they’ll lift the last restrictions on public gatherings on June 21 — we are planning the First Annual Mary Seacole Picnic at Mary Seacole Memorial Park in Harlesden, June 25-27.   Capacity will be limited to 30 people at any time, but fringe activities, including walking and paddling tours of the canal to the adjoining cemeteries, including the graves of the brave and enterprising nurse, will occupy more. 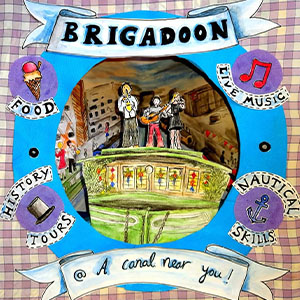 It’s the first manifestation of Brigadoon!, with a handful of boats, that we expect to grow in number as we roll onto the next event a week later, and one a week after that.  Each one reflecting the character of the neighbourhood.  Each one requiring agreements between local Borough officials, CRT and Met Police.  Each one leaving a template of risk assessments and Covid-precautions for other canal boat owners, roving traders and performers to jump start discussion with with local officials.  Who this time, will already know what you’re trying to do.

We kick off in West London, where the moorings are plentiful, and where we hope it will be easier to rendezvous with roving traders who we hope to entice down to the city later in the summer.  If we can band together as many as 20 of them, and give CRT a good 4-6 weeks heads up, they’ll put out mooring suspensions in central London to bring the flotilla to the people.

That’s the second major outcome we see from all of this, making London attractive to roving traders again.  If you’re someone who sells goods or services, and think you’d like to join us, you can follow our progress on our website, and we’ll see you on the canal!