ac wiring of a boat

ac wiring of a boat

Part 1. Inverters and Selecting the right one for your boat

I often hear people saying that you cannot run this or that piece of equipment on their boat. It might be the lady’s hairdryer or the coffee maker. Well there was a time when on our leisure boats all we had was DC power from a battery and not very much of that, unless we had a generator. Generators were and still are expensive a 3kW generator still costs today order of £8000 installed on a boat. The electronics world came to our rescue with the Inverter. 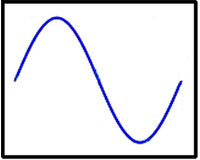 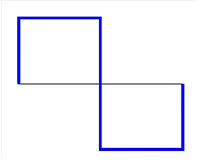 When compared with the Sine wave this is banging from +230V to –230V rapidly holding the voltage at either +230V or –230V. It is being very aggressive in the way it is pushing the volts into whatever is being powered and the item will overheat and fail after a period. In simple terms of the power it delivers it is considerably greater than the power a sine wave delivers and the item is expecting. 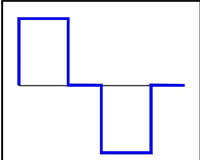 To solve and reduce the problem of over powering items the modified Square Wave can be used, Figure 3, but it only reduces the overall power. The item being powered is still held at maximum voltage for considerably longer than it is with a sine wave which is what they are designed to be powered by. This is particularly a problem with Motors and anything that has electronics in it. Things overheat and deteriorate over a short period of time.

The only thing in my opinion about this that is similar to a sine wave that comes out of home sockets is that the wave starts at the same point in time and the next one does as well.

Finally Pulse width modulation and computers came to our rescue, this allowed a sine wave to be built up from a square wave and then treated with filters and transformers to give a pure sine wave. 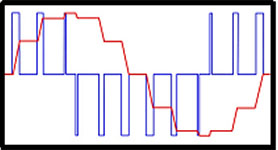 In Figure 4 is an example of pulse width modulation producing a crude sine wave. When finer and more pulses, controlled in both width and amplitude, then you have the starting point of today’s good quality Pure Sine Wave inverters. Then with good filtering and transformers you can produce AC sine wave inverters as good as the sine wave that come out of the sockets at home. Which is what the good Inverters do.

Which Inverter should I choose for the boat

Inverters are made in a wide variety of power size typically ranging from 175W to and almost unlimited amount as good quality inverters can be parallel and it is now not uncommon for boats to have a pure sine wave inverter system exceeding 15,000W (15kW). I personally commonly fit inverters that are capable of supplying 3kWh &b 5kW (3000W & 5000W). People are getting to the stage of using Induction Hobs, which need a pure sine wave Inverter.

So how do you decide?

So let us take a few examples:

a)  A washing Machine typically a full-blown modern washing machine will use order of 2.5kW that would need a full 3000VA to run it successfully. The main power usage is the heater heating the water and this is a heater order of 2kW. The rest is the electronics and the motors.

c)  A Vacuum Cleaner – Since the 1st September 2017 vacuum cleaner have been limited to a maximum power of 900W so that is the I will use for our Vacuum cleaner example.

All inverters have their stand continuous output say 2000W but they also have a Peak power output it is normally order of twice the continuous output.  The reason for this Peak Power rating is to be able to start the likes of an electric motor. They will supply the extra power the motor needs to get turning, the need only lasts a critical few milliseconds.

So for our example vacuum cleaner with a running power of 900W we need to multiply that power by between five and six to get the peak power to start the motor. Times five is 4,5000W so we need an inverter that needs a peak power of order of 4500W and a continuous power of more than 900W. This is likely to be something like a 2000W or 3000VA inverter to get the safe starting power needed.

There has been a move towards mains fridges & freezers because they cost so little compared with the 12V versions. The fridge compressor is run by an electric motor and so we have the same problem as with the Vacuum cleaner, the peak current needed to start that motor.

I hope the above gives enough insight and knowledge to help those trying to workout which inverter they need for their boat. Do remember if you want to run the Fridge & the Vacuum cleaner at the same time you need to add together their power ratings to arrive at the size of inverter needed.