This edition explores the intertidal zone between history and the 21st Century Canal system within Wigan. The Leeds and Liverpool Canal reached Wigan from Liverpool in 1781.  2019-1781=238 years ago! Around the same time as General George Washington began the siege known as the Battle of Yorktown, against the British General Lord Charles Cornwallis. Plus, the planet Uranus was discovered by William Herschel. I wonder, what Wiganers were thinking of at the time? This is what George Orwell wrote in his book The Road to Wigan Pier (source: The Orwell Foundation)

GEORGE ORWELL: Well, I am afraid I must tell you that Wigan Pier doesn’t exist. I made a journey specially to see it in 1936, and I couldn’t find it. It did exist once, however, and to judge from the photographs it must have been about twenty feet long.

Wigan is in the middle of the mining areas, and though it’s a very pleasant place in some ways its scenery is not its strong point. The landscape is mostly slag-heaps, looking like the mountains of the moon, and mud and soot and so forth. For some reason, though it’s not worse than fifty other places, Wigan has always been picked on as a symbol of the ugliness of the industrial areas. At one time on one of the little muddy canals that run round the town, there used to be a tumble-down wooden jetty; and by way of a joke someone nicknamed this Wigan Pier. The joke caught on locally, and then the music-hall comedians get hold of it, and they are the ones who have succeeded in keeping Wigan Pier alive as a by-word, long after the place itself had been demolished. 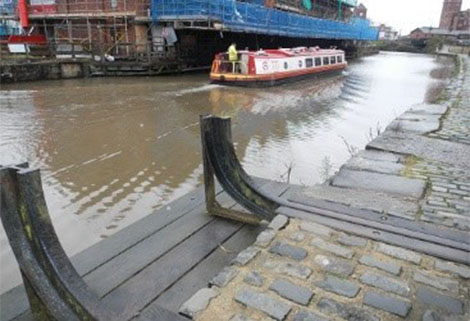 The present-day photo depicts the spot associated with what is left of the pier, where the coal was loaded onto the barges.

Currently there are plans coming to fruition known as the regeneration scheme, being led by developers Steps Places, together with The Old Courts cultural organisation, Wigan County Council and the Canal and River Trust.

With promised highlights of a wedding venue, gin distillery, micro-brewery, food hall and waterside town houses. If you visit soon, scaffolding is in evidence as work is well underway, directly on the opposite bank from the remains of the pier. 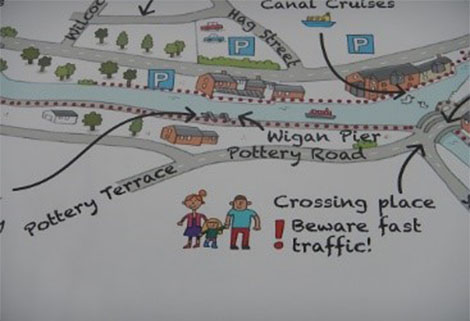 Not for me to say, but I propose that Wigan Pier is not a thing, a joke or part of a structure, it is more of an intangible link to the very fabric of the Canals, passed down through the generations of boaters and workers, by author’s and  comedians alike and yes by me now in December 2019.

If you want to see a genuine ‘cross-road’ of canals, or to be able to say “I’ve been to Wigan Pier” and in some small way, become part of the legend, then you must visit. No rush though, it will be there for you for simply ages yet. Maybe re-engineered with Wigan’s pubs and shops, along side their Rugby and Football teams. Examples of engineering from another age, including a working steam engine and, would you believe, an indestructible fan, next to a refurbished mill and a boat yard. All on the banks of the Leeds and Liverpool and the Leigh Branch, leading to the Bridgewater.

The Wigan waterways also have events and cruises. If you want to wander a little further from the Pier itself, you will also find the River Douglas, Wigan’s river, once made navigable (canalised) around 1720 with its own 13 locks! and still tidal, just a few miles downstream, eventually joining the River Ribble.

There are also several cycleways to help you enjoy the environs around Wigan Pier in the here and now, as the sign in the photo suggests and helps with distances and direction.

Facts and points of interest loosely playing to our Intertidal Zone as a metaphor.