Home » Editorials » we are back

We are back under what is termed the new norm – so face masks at the ready and off we go again.

I have deliberately left going out and doing too much for quite some time, I am well versed in what happens when people are left in solitary confinement for a while and certainly the term cabin fever. I understood things would be anxious on the cut and this was born out by some kind of incident a mile down hill with an air pistol being waved about in an altercation - really what none of us need thank you.

Anyway first job is the dreaded safety- it really isn’t as bad or as onerous as people think, top tips are, keep the gas taps twiddled apparently the seals dry out, I don’t often use my oven so made sure it was all working. Check the obvious- fuel lines etc and remember the boat needs to be ventilated. Two of mine are much room vents that in theory could be closed – stick a nut on the thread to make sure that they can’t – I was reading some online forum about insulation – just remember you can insulate to your heart's content but you still must have what is actually quite a large air flow going through the cabin. Also label things, gas isolation valves, fuel stop cocks, battery isolation etc so the inspector can see everything. I added another CO detector in the cockpit (more of this later) but have always carried one since the children were small. We passed without issue. I have beetled on about this in the last article but do not be tempted to fill it back up with non-compliant gas heaters etc, you are not getting one over on an authority, you are just endangering yourself and others, boats can and do catch fire and the sad sight of a burnt out barge at Seend is a stark reminder.

Next fire up the engine - But before we start remember none of us have gone anywhere for a while so first things first, clean the prop of weed and growth, next tilt the out board up and down a few times to let whatever muck has found its way up the strainers out - you will be shocked by what does emerge.

Then grease the life out of the steering and tilt mechanism, oil the cables and manually check it goes into neutral on the gear shift. I love this bit because mechanics is a hobby of mine restoring vintage engine from Horticultural machinery through to Motorbikes (a man cannot live on boats alone he needs a varied life). Diesels need three things - decent compression, CLEAN fuel and plenty of air, Petrol needs clean fuel air and a spark to coincide at roughly right place. Winding the guts out of the starter because it won’t fire doesn’t do anything or do yourself any good. There are plenty of decent flow charts for engine trouble shooting on the internet, download, print off, laminate and stick it by the engine. Even those of us who have been doing it a few years make mistakes as a recent telephone call to a tractor engineer proved that sometimes even I rush things and don’t do the bleeding obvious – which was to bleed the air out of the diesel pump properly.

Remember the top tip for outboards – run them out of fuel to stop them when you finished cruising- basically just take the fuel line off – this completely empties the carburettor and the last cough pulls any rubbish through the main jet. 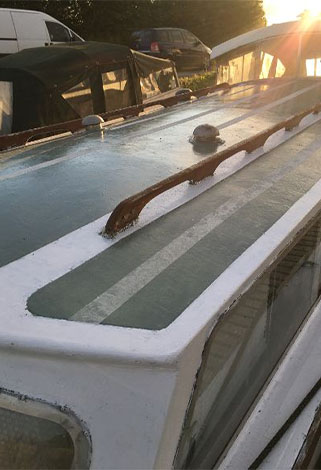 A quick lick of paint just to touch up the areas the weather had got to and some natty grip tape for the deck from an online store – which now is the new norm - and we are ready for the off and a cruise down to Semmington for the first time in ages.

I think the most obvious thing was how overgrown it had all become because the volunteers could not go out an maintain the towpaths and the offside bank.

We encountered quite a large fallen willow with its branches below the water line. Always put the engine in neutral and go and investigate with a boat hook or something- hitting that with a spinning prop can only do damage.

I have always worn leather gloves operating the locks but now sanitiser gell etc are used.

It was good to be back, the pub is still closed as it would seem are some of the rubbish collection points but generally everything was as we left it in March.

Fully inspired leads to a quick cabin project and that ugly joint between a Dawncraft deck and cabin. Originally this had carpet stuck to it but because of its compound curves sticking anything is difficult so I decided to box it in - this required templates and careful measuring ( a tile combe is excellent for this type or work) Lots of sawing cutting and gluing an the first section went in – when it came to the bunk end I realised that the curve in the boat wouldn’t allow for boxing in so just cut a strip of ply and screwed it on at an angle - The result looks ten times better than my boxing in and just shows sometimes simple is best. 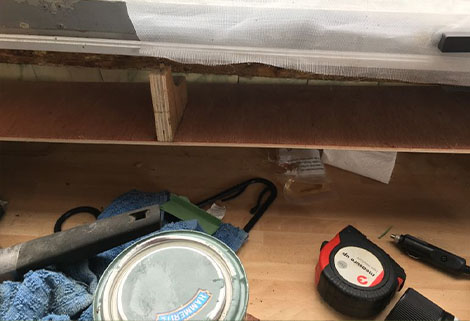 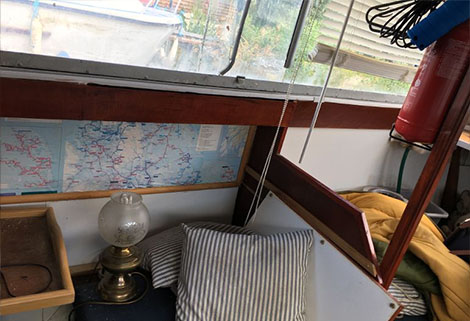 Finally the one thing good that came out of lock down was the online boat forums – sometimes we are all too critical of others mistakes. If someone is in trouble, help and explain it to them - especially if you have a long and often painful relationship with something like an enfield Z drive.