The Waterways Chaplaincy has not shut its doors! Indeed, many of our chaplains have been exercising on the towpaths near their homes or boats and that has enabled them to keep aware of needs arising among the boating community in many areas.

They keep in touch by phone and WhatsApp is a wonderful thing...

CRT’s guidance rules mean that at the time of writing, continuous cruisers are not allowed to move their boats. I am also aware that in a number of areas, crowding of towpaths has been a real problem to liveaboard boaters who know themselves to be vulnerable. They feel ‘crowded’ by insensitive towpath users and cyclists. Sadly, there’ll always be some individuals who won’t fall in with the rest of society, and they are indeed deeply frustrating. 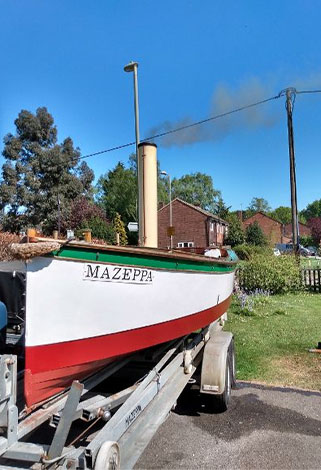 At a personal level, amongst other more important jobs there has been time to prepare the steamboat for when the river is once again open. A couple of weeks ago I lit the fire to try things out and sat aboard in my front garden with smoke and steam pouring from the funnel and the propeller going round. I live on a fairly public corner and was rather aware that people might be thinking that having experienced a plague, clearly this madman thinks there must now be a flood on the way: I hardly liked to tell them that this year there are more tadpoles in the garden pond than ever before...

I’m a vulnerable person: a neurological condition called Myasthenia Gravis retired me a little early so I’m being protected by my wife. I can’t go into shops, for example, so she ties me to a bollard with a piece of string, where I howl piteously and have an occasional slobber in the stainless steel water bowl left outside, I guess, for people like me.

We have to smile in situations of adversity, and this Covid-19 crisis has been a wake-up call for a lot of people. It has raised anxieties, highlighted vulnerabilities, caused real deprivation for some and distressing bereavement for others.

I said the Chaplaincy isn’t locked down. Well at some levels it is because a lot of us are not having much physical engagement with the waterways, and nothing is moving on the water as I write this apart from some bemused ducks and happily untroubled geese. Yet we still remain busy.

Every Chaplain’s background task is the business of prayer as we seek to align ourselves with what God might be seeking to do in any given human situation. That’s a big thing to say, I know, and begs the usual questions like ‘how can there be so much evil about if a God of love is supposed to be in charge?’

Well, Christians believe that God is indeed fully aware of the stresses and horrors of human life and we don’t need to tell Him to get on with His job! We are not puppets: we have freewill to live and make a mess of things and He lets live, nevertheless we are keen to align ourselves with his purposes. That means that where possible, we can seek to be active in helping to ease some of the challenges faced by the people we meet.

A very little can go a long way and, aware of that, the Waterways Chaplaincy communication network sets our phones twinkling very often, sometimes late into the night when my wife will sometimes whisper... ‘Your phone just beeped, I guess about Boater F or Boater T’. And she’s usually right.

So although things are different they are by no means closed down. And neither is God himself locked down.