I am very fortunate to be living opposite a bridge over the Kennet and Avon Canal, part of the High Street, in Hungerford. The Rose of Hungerford, a pleasure boat, is moored opposite my house, as are several other narrow boats. There is often activity on the water with the movement of boats, fishermen sitting for hours along the towpath, or the annual canoe race from Devizes to London. In the better weather, boat owners are busy cleaning their boats or they put foldaway chairs on the towpath and sit and enjoy a chat with their neighbours or have drinks and snacks out in the sunshine fore or aft. They are always ready for a friendly ‘Hello’. 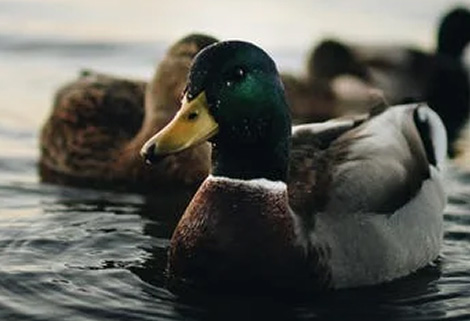 Another great pleasure in living by the canal is watching the waterfowl. There are always plenty of ducks, the males with their beautiful heads of green sheen, and if we are lucky, a flotilla of baby ducklings in the spring. Sad to say, the ducklings reduce in number very quickly and few survive to maturity.

Parents and grandparents bring their children to feed the ducks. Feeding them with bread is not good for the canal, as it pollutes the water, and is not nutritious for the ducks, whose natural diet is seeds and greenery (try sweetcorn, lettuce, peas, or oats), but families have done this for generations and there is no way of stopping them.

As well as the ducks, there is an occasional coot or moorhen, and every summer half a dozen Canada geese make it their stopping-off point for a few weeks. They’re very visible with their smart long black necks and white bodies.

Then there are the swans. This year, one set of parents has been very much in evidence with their cygnets, as large as they are but with brown feathers, now turning white. When they first appeared, there were seven of them, but one disappeared. However, this male and female have been very good parents and have successfully reared the other six. They join the ducks to be fed, often leaving the water, which is very disconcerting for parents when the swans are as tall as their very small children and are not nervous of approaching a possible food source. 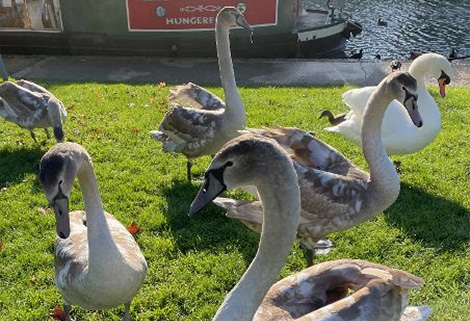 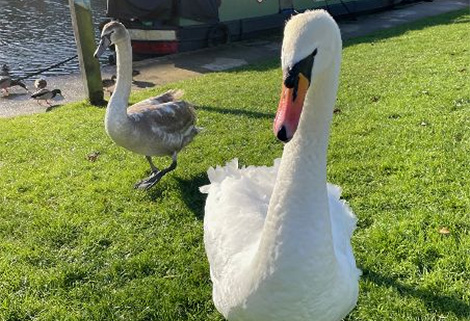 Sometimes they spring up onto the grassy bank on my side of the canal, flap their wings to dry off a little, then approach any visitors who are taking advantage of the sunshine by sitting on the wooden benches to eat their snacks.

They were there today, at the beginning of December, and we took some good close-up photos of them; obviously they thought that the mobile phone was something good to eat!