water water everywhere and not a drop to drink

Home » Editorials » water water everywhere and not a drop to drink

water water everywhere, and not a drop to drink

I’ve had one of those 'you read it here first' brainwaves, so cheap and effective that it's criminal that my little brain didn’t come up with this years ago. Drip strips!

Most boats I have come across all suffer the same problem - water building up in the window mechanisms, over whelming the drain holes and flooding inside. I have even watched people remove them and re-bed them only to find it made little or no difference. Indeed, if you look at old boat brochures from the 1970s the stark difference between a Dawncraft and say a Broom, is the finishing details. Basically, we don’t have any: just pretty well as two burly blokes yanked it unwilling out of its mould and glued the top to the bottom. Quick trip to local hardware store and the cheapest plastic quadrant moulding I could buy and a tube of 'stick anything you like to whatever you like' and we are away.

Ok I did go so far as removing any old paint before doing this and then set about gluing the quadrant in above the windows, which oddly produced a rather pleasing curve, the type found on more expensive boats – which had built in drip strips. The results, staggering! No water enters the window channels at all. Spurred on by this and not wishing to waste half a tube of glue I did down the deck sides where the water always builds up against the cabin side, the front window and the canopy roof. Now, rather than water pooling and collecting under windows, in windows, running down windows turning them milky, it actually flows off the back of the boat. 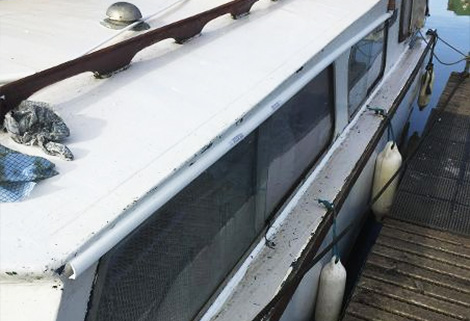 I know it’s been the driest summer on record but I have been noticing more and more water in the bilge. So I extended the canopy to cover the out board opening in the transom. I thought of all types of clever glass fibre panels that could do this and then came up with the cheapest option – add 3 feet of PVC to the bottom. This wasn’t as easy as it seems – or even seams. Luckily in my sail training days I became a dab hand with a sail maker's palm and sail needles, as it was eventually hand sewn. Top tip is to pierce the needle holes first with a small nail. A handy awl stitcher should be a must on any boat. Bored and with nothing on the tv, I set about the biggest task: making a winter bonnet out of one single piece of PVC that covers the canopy roof. I wanted it in one piece because after a while stitching leaks. It's not the prettiest of jobs but it’s incredibly effective – it seems to stop the condensation as well. Again, all done by hand. Top tip 2 If ever you try this single handed, buy some cheap awning clamps; I can guarantee that even on the calmest of days a wind will spook from nowhere and dump it in the canal.

Chuffed to bits with my latest improvements I returned on a wet Monday evening to check how much water was in the bilge. It was full, fuller than I have ever known it. I threw buckets of water over the canopy convinced it must be entering via the outboard well. Nothing. And worse still, I could hear water dripping and trickling. Slight panic mode, I hit the bilge pump switch and cleared it. But even after it was cleared, water was still trickling in. Ok start engine. Last resort, ram it on the slip way - anything but sink. I’ve written this many times before – Do not clad the inside of your hull below the water line, Torch in, got time to sound ship, every locker turned out every nook and cranny from bow to stern looking for a screw hole anything that is leaking. 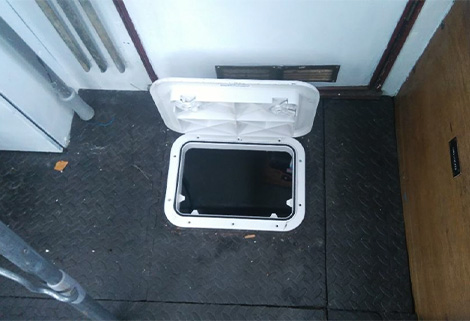 The trickling noise stopped, but would start again if I moved my weight to port. Ok pump the dinghy up Anchor DT in basin and check outside hull in case we had been rammed and I was missing something on port side. Nothing, the boat is now all over the cabin sole, pans, ropes, fenders everything out. Perplexed, it's time for a coffee and a think. NO WATER, yet the log (and I always keep one) stated that I filled up 50 litres Sunday afternoon. The tank had split on one of the pipe joins- the fact that it was actually installed upside down so it filled from the bottom didn’t help. It was just quirk of fate that I happened to be on board as it was happening, me moving to port emptied the last of it.

Oh well I had a new water tank which I always wanted to put in the bilge floor so it didn’t upset the balance when being filled up and the following weekend was spent installing it. I have to say it was a pleasure to work in the cockpit without a dripping canopy. Had I paid attention I would have realised that this had started to leak a week or so ago hence the water.