iwa word on the waterways

We have made it through the tough winter months, which seem to have consisted of rain, rain and more rain. Hopefully we have seen the back of all the flooding and can now look forward to the warmer months, with more opportunities to cruise the waterways.

Some of the most exciting, or is that just Adrenalin-inducing, parts of cruising our canals are the tunnels of which there are 48 still in use across the network. Some of the earliest tunnels no longer exist, many falling foul of subsidence but as they became more widespread, tunnels began to develop, becoming wider, straighter and longer. The longest tunnel on the network is Standedge on the Huddersfield Narrow Canal at 5000 metres, second is Dudley on the Dudley Canal at 2900 metres. The shortest tunnel is Dunsley on the Staffordshire & Worcestershire Canal which is just 23 metres long. 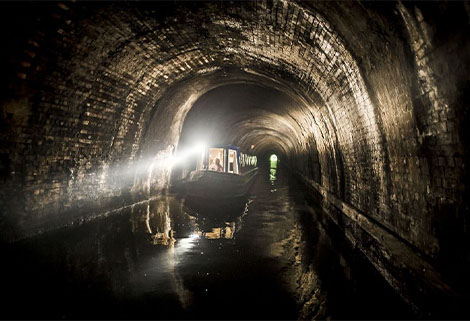 Boating through tunnels can be dangerous and boaters need to be aware of the rules, which may differ on each individual tunnel.

Tunnels can run on a one- or two-way working system. There is always signage at the entrance to the tunnel to indicate whether two-way passage is allowed or if there are time restrictions on entering.

The signage will also inform boaters if unpowered craft are likely to be encountered in the tunnel.

With tunnels such as Foulridge on the Leeds & Liverpool Canal, with its traffic light system, or Preston Brook and Saltersford tunnels on the Trent & Mersey Canal, which have timed periods for boats entering at either end, you are unlikely to encounter oncoming boats unless one of you has ignored the lights or signs! 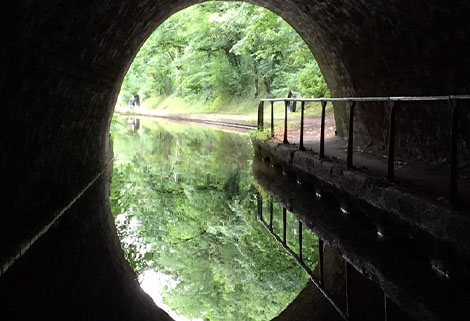 Chirk tunnel on The Llangollen Canal by Jane Rabagliati.

Passage by wide beam boats needs to be arranged in advance with the navigation authority, who will have to close the tunnel to other traffic.

All boaters should take great care and keep a good lookout when navigating tunnels. Things to be aware of include catching up the boat in front of you, and looking out for any unpowered craft that may be using the tunnel.

Top Tips for boating through tunnels 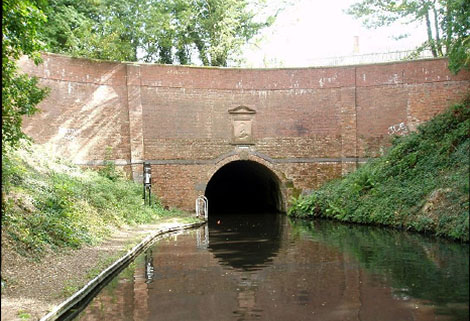 Before entering a tunnel:

• Switch on headlight and also some internal lights within the cabin to make yourself as visible as possible.
• Make sure that additional lighting in the form of a waterproof torch is available for the person steering. A boat’s tunnel light should not be aimed straight ahead but slightly up to illuminate the roof.
• Check that there is no boat already in the tunnel coming towards you if it is too narrow for two boats to pass.
• Ensure nobody is on the roof or sides of the boat.
• Put on waterproofs as tunnel roofs are often wet.
• Wearing a life jacket is recommended, especially if you are single handing.

On entering a tunnel:

• In tunnels where two-way working is allowed, enter the tunnel slowly in case there is anything about to exit the tunnel. Once in the tunnel aim to keep in the middle of the channel in order to avoid scraping your cabin top or chimney on the tunnel walls.
• Watch out for the changing profile of the tunnel - tunnels are seldom dead straight!
• Keep a distance of at least 160 metres from the boat in front of you (about 2 minutes apart at normal cruising speed).
• If traffic is two-way, keep a good look out for oncoming boats. If you meet an oncoming boat in the tunnel, slow right down and move over to the right.
• In tunnels where unpowered craft are allowed, look out for small boats at low level ahead of you.
• If you have to stop for any reason turn off your engine. This will avoid any danger from exhaust fumes.
• If you break down, sound long blasts on your horn to attract attention. Do not swim out. As a last resort, you could try to push the boat out using a boat pole.
• All on board should avoid shining their hand-held or head torches directly at on-coming boats.

If you follow these tips then you will have safe passage through any tunnels that you might come across on your journey.

Good luck and enjoy your adventures.