Home » Editorials » so you want to live on a narrowboat?

There's been a surge of interest lately in 'living small'. Tiny homes, RVs, repurposed shipping containers, all have seen innovations recently to become more liveable and practical. And it's trendy so what's not to like? Living on a boat, particularly a narrowboat, is very much in this category. However, it comes with some added issues. 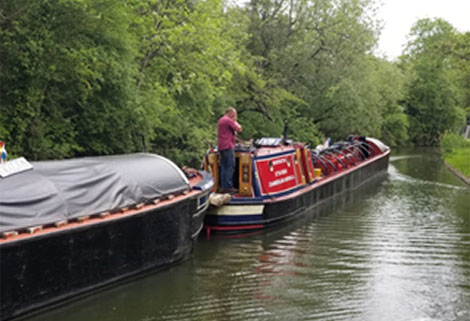 First, a little history; narrowboats began as working boats, delivering the goods and supplies that fuelled the Industrial Revolution in Britain in the 18th century. A single horse-drawn narrowboat could supply as much as 50 times the tonnage that a horse and cart could deliver, albeit at about the same speed. 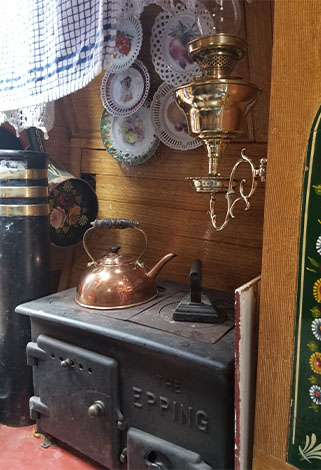 In the early 1800s boat operators began to bring their families aboard, partly to save on rent at home and partly as 'free' crew to help with the work. Of course, living space on the boat was at the expense of profitable cargo space so the 'boatman's cabin' was tiny. Usually about eight feet long and often housing a family of five or more, it was a model of compact efficiency.

Eventually railways took over the majority of the cargo-carrying business throughout Britain. By the early 20th century commercial use of narrowboats was rapidly fading out although some small vestiges (including a few horse-drawn ones) continued into the 1960s.

As the canals themselves fell into disuse, many intrepid volunteers began to resurrect the waterways and the boats for recreational use. The 'modern' narrowboat is typically 50-70 feet long, built of steel, and has a diesel engine. Although it’s now almost all cabin (little or no deck space for cargo) it's still less than seven feet wide (hence; narrowboat) in order to utilise many of the narrow locks. 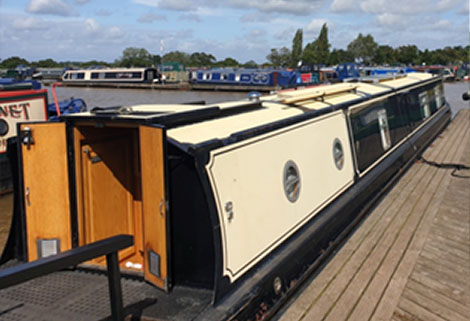 Most have also retained some of the historical compact efficiency. They have all of the usual modern amenities; central heat, refrigerator, shower, etc. However, there is a big 'but'. Even though the modern narrowboat has many 21st century conveniences, they often come with significant differences from shore-based homes. I'll go through some of them one at a time, although they are often inter-related…

Since my boat has a reasonably powerful diesel engine, raw power isn't usually a problem. There are two alternators to charge a bank of four high-capacity batteries for running all the electrical (and electronic) devices on board. 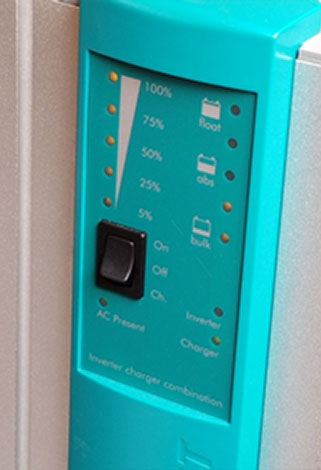 As with many things however, it's not always that simple. Lead-acid batteries (the usual car type) are quite finicky with their charging regime. They like to be kept charged up, and will break down and may fail if they're run down past about 50% of their capacity. So it's vital that close attention is paid to them. I've recently installed solar panels, which has helped immensely over the summer (not so much in the autumn and winter). They supply enough wattage that I don't have to start the engine for days on end if I'm not travelling.

Most of my equipment on board runs on 12 volts so I don't need to run the inverter to convert to 240v AC, except to charge my laptop (I'll be investing in a 12v charger this year). The inverter itself takes significant power so it reduces the efficiency of the system. I try to only run it when the engine is running (to charge my 'Hoover' for instance). 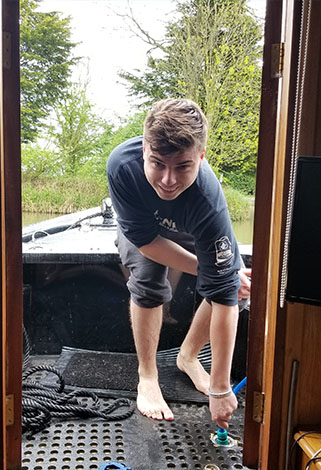 My boat, like most narrowboats, has a large-capacity water tank. I can go many days or even weeks without needing to refill it, and there are numerous water points around the system so obtaining water isn't a big problem. But again, careful watch must be kept. I've only run out once, and it's a pain. In a house the supply of water is generally seen as an endless thing, not to be worried about (except in an ecological, save-the-planet sort of way). I've grown very accustomed to only running taps, including the shower, as needed. Wet down, turn tap off, shampoo and wash, turn tap on to rinse. This actually goes double for hot water. The only ways to get hot water are by running the engine (cooling water is cycled through a 'calorifier' or hot-water tank) or the central heating system that runs radiators throughout the boat and also cycles through the tank. It's well insulated so I have at least 24 hours of hot water after only a short engine run but it's definitely something that has to be thought about daily.

Now we've come to perhaps the biggest issue on narrowboats. Get two boaters together for more than 5 minutes and they'll be debating the issue of toilets. Mine is a pump-out type, with a large holding tank, but there are several others, each with their own advantages and disadvantages. I won't get into that here, google it to learn more than you would ever want to know about them and what can cause an argument on a narrowboat online forum.

I have found that I can go several weeks without needing to pump out, and almost every marina has a facility so that hasn't been a problem. I'm quite stingy with how much water I use to flush, as I am with water use in general. Again, it must be thought about and monitored, much different from living ashore.

Lots of people, on shore, tend to do a reasonably large shop for groceries every week or two. They have a freezer for much of it, a large refrigerator, and lots of cupboard space. On a narrowboat this isn't often the case. I have a small bar fridge, with a tiny freezer section, so I really do have to be careful how much I buy at one time. Even space to store dry goods is at a premium. To complicate matters, access to a grocery store is a bit hit-and-miss. Often a selected cruising route doesn't go near a town or village for many miles (which translates to many days at 3 miles per hour). Careful planning is necessary; I've learned to keep certain things handy in case the fresh food runs out, like pasta and jars of sauce, beans, soups, etc. And, really, there are always pubs.

This really comes under the title of Power. The diesel engine supplies not only propulsion, but also hot water and electrical power. Even the central heating radiators are diesel fired. In a house, these things are just sort of 'there'. Petrol (gas in North America) stations are everywhere for the car, hot water just comes out of the tap, and stuff works when you plug it in. So keeping an eye on the fuel level is important. Having said that, I fill with fuel nearly every time I pump out the holding tank (usually a marina will have both together) so it's not a big problem, just another thing to think about.

This isn't really a make-or-break subject, but it is certainly much different than in most homes on land. Very few narrowboats have a washing machine on board (although more and more are installing them), and even fewer have a dryer. The power and water needs make this simply impractical. They also take up considerable valuable space on board. I have found that simply having many more pairs of socks, underwear, and t-shirts helps to solve this. The number of 'launderettes' in Britain is declining like everywhere else so some planning is involved. If I'm going near a village or town, the first thing I check for is a pub, the second is a grocery store, and the third is a launderette. Finding one has become a reason to celebrate and often I'll stay an extra day to clear up the backlog of clothes, linens, and towels that need washing. I do have a clothes drying rack and will wash things in the sink if necessary but that hasn't been much help in summers like 2019 where it seemingly rained every day after June!

I've had several wonderful friends visit aboard during the summer of 2018, and I start each one with some instructions. Right after the locations of fire extinguishers and PFDs, first is that "There are no secrets on a narrowboat". We will all know when you go to the bathroom, whether you snore, what you like to eat and drink, and many more intimate details. But that's also part of the fun! Acquaintances become friends, and friends become family. All it takes is a good attitude. 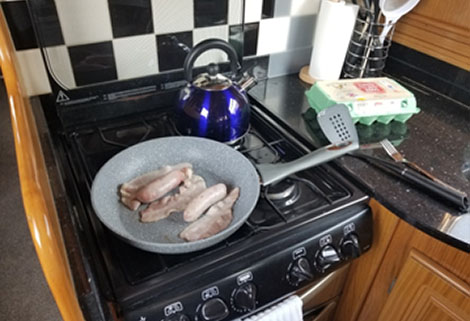 Within the limits of reality life can be very relaxed and carefree on the 'cut'. Where you take the boat is completely up to you (and your guests) as long as you stick to the parts with water. I have made some side trips on land as well, and with the great public transportation system in the UK, almost all of the country is within a few hours of a canal. There is a lot to see and do.

As for meals, the pub culture is alive and well so it's not always necessary to cook for oneself. However, I have found that when sitting out a rainstorm, cooking dinner is a great way to pass an afternoon. Who knew? With a bit of planning I've found that I can produce a pretty good meal, if I do say so myself. Most often in a frying pan, but I'll move on to the oven some day. I've recently discovered that I have one of those…