Recoheat makes a unique pumped-air heat recovery unit for solid fuel stoves, and this year’s Crick show was their first customer-facing event. The device fits into the flue of a stove and pumps air through a steel coil to super-heat it. The resultant jet of hot air passing over the top of the stove draws the heat from the stove out into the room in a pressurised flow. The heat from this flow is then passed into the wider area by the equalisation of the air pressure, so travels much further and more evenly than by any other means.

“We came to Crick because one of our first customers was convinced the product was ideally suited to the live-aboard market. He lives on a 70’ x 14’ broadbeam on the Ouse and after 20 years on boats of various sizes, this was the first device he found that actually heated the whole boat, and also completely got rid of condensation through its creation of a flow of warm air. He invited us to visit and explained how difficult condensation was to overcome, and since then has been enormously supportive in presenting us to his fellow boaters.”

The company is now based in Suffolk, but the device is the invention of Kevin Haworth, a plumber from Burnley. He launched the product in 2014, but with no backing or support from the academic and business communities he approached, he couldn’t meet the CE marking requirements and was forced to close. Luckily, that wasn’t before he’d sold a Recoheat system to Will Burrows, who used it for three years before returning to buy another. When he found the website down, Wil got in touch with Kevin and took over.

“I had my unit heating a 30’ x 14’ cabin with three rooms and a corridor, from a 5kw stove. It was extremely effective, and when I went to buy another unit for a new workshop and found the website gone, I got in touch with Kevin. The product was too good to lose: there aren’t many things you come across that really do work much better than anything else around.”

Some of the effectiveness of the device was easily understood. Stoves use convection to move the radiant heat from the metal box into the rest of the house, so the fire first heats the walls of the stove, which radiate into the air, which warms and rises, drawing fresh air into the stove. When the fire starts to die down, the convection flow stops very quickly so that the stove stops moving heat into the room almost immediately. The pumped air on the other hand, starts pushing air from the combustion as soon as the fire is lit, and continues to pump it for hours as the stove cools through the flue: for anything from three to eight hours depending on the size of the logs and stove. However, there were a lot of other performance peculiarities that the company only discovered from their customers.

In their first winter season, they sold a few units, mostly to sweeps, installers and engineers – people who had the confidence and curiosity to test a completely new system. “For us, every sale was marketing: we knew the device worked, but explaining why was hard, and people would only believe other customers, of course. It was their support that got us started again, and it’s what drives us now. It’s also what teaches us about how the system actually performs, which in turn has helped us understand the physics involved, which is really fascinating.”

Notable customer feedback comes from installations as diverse as barn conversions, yurts, terraced houses, stone cottages, farm houses and even chateaux, mountain cabins and two bedroom bungalows. The common theme of the feedback is that the heat dispersal is bizarrely wide, moving out of the main room into corridors and other rooms, including upstairs even on large properties. In the barn conversion, the system ​heats the bedrooms from the ground floor, and several customers have reported that their large rooms are warm right to the walls, and even more remarkably, that their feet are warmed when the device is operating.

“There was a lot of feedback we couldn’t explain – particularly in terms of the heat profile. Typically you observe that the room temperature is much more even – you don’t have a hot area around the stove whilst the rest of the room is cold. But heat rises, so how could the unit heat to the floor?”

It was through Recoheat working with an engineering consultancy that the mysteries started to be unravelled. “At first they told us that our observations and explanations were fanciful, but when they discovered they weren’t by measuring the inputs and outputs, they not only understood it but were able to model it in their simulation software.”

The key to the heat transfer in the unit itself, as well as in the room, is turbulent air. Essentially, air heats molecule by molecule, so when it’s all flowing gently along in one direction, the heat transfer is quite slow, which is why an air gap is good insulation. But if you can induce a turbulent boundary layer, you disturb the airflow until the molecules are all bouncing around very fast, coming into contact with lots of other molecules and passing heat between them very quickly.

The high-powered pump and the coil shape creates that in the airflow, which means the air heats very fast. The air that comes out of the unit has been accelerated as the heat makes it expand under pressure, so that the outlet jet is three times faster than the inlet. This hot, high pressure jet is still turbulent when it passes over the top of the stove, so the hot air rising from the stove is drawn into it much more efficiently. So then the heat from the coil and from the stove are pushed into the room, but are crucially at a higher pressure than the colder air in the room. The pressures have to equalise, and it is the equalisation that disperses the heat so widely without any additional work from the device. This also means that it is the coldest, and lowest pressure areas that heat first, and that the distance from the stove isn’t important in something like a boat: if the air passes freely between areas, it will have to equalise in the same way water has to level.

Will now works on the project with one of his sons, with help from some of his four other children when needed. “We sold ten times as many units last winter as in our first winter, and twenty times as many last summer as in our first summer, so we’re hoping to maintain that level of growth. Launching in lockdown, and navigating some of the most difficult economic conditions for decades is tricky, but we know we have a product for the times: we’re allowing people to replace their central heating and sky-high oil, gas and electricity bills with their stoves, whether in whole or part. Our general feedback is that a 5kw stove with a Recoheat will heat a two bedroom house or its equivalent. The core of the house will be warm and the bedrooms will be cooler, but not cold, and that’s a massive thing. We really want people to benefit from this, because everybody needs the help.”

Recoheat have a website  and maintain a Facebook page and YouTube channel, which has driven most of their business to date, and is certainly responsible for bringing them customers as far afield as the States, Canada and even Australia, as well as all across the UK. They’ve been on TrustPilot collecting independent reviews for just a few months, but already have an impressive profile.

You get a good picture of the relationships they have with customers, doubters and supporters from their interactions on the different platforms, and they’re conversations they obviously give a lot of importance to. It looks very likely that those conversations will grow over the next months and years. 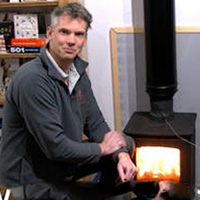 CanalsOnline Magazine met Will Burrows of Recoheat at this year's Crick Boat Show and were amazed at the efficiency of this product. Recoheat is a family run business with lots of glowing customer testimonials.  Well worth investigating!