possession is 9/10th of the flaw

Home » Editorials » possession is 9/10th of the flaw

possession is 9/10th of the flaw 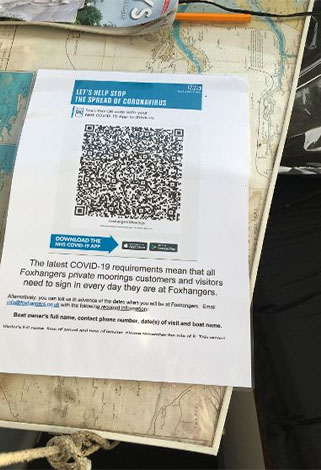 Having first done my tap and trace with a QR code laminated and stuck on Dawn Treader's door, I am writing this down below on a very stormy, blowy Halloween.

There is a noticeable lack of cluster flies in the cockpit - mainly because I filled the aluminium frames with expanding foam, which seems to have removed the little crevices they were trying to hibernate in. Or perhaps it's because I am having to ask a rather large resident spider if it minds if I use my own loo; ecology took over and they have been eaten. Or like a coal mine canary, died of poisonous gas!

Ok seeing as it is Halloween here is a spooky tale about a possessed Carbon Monoxide detector that seems to go off in exactly the same place on the canal - and before we start please, I am not here to sound like some BBC journalist spoon feeding you the obvious dangers or Carbon Monoxide 24 /7. We are adults.

It all started when I went above and beyond on the boat safety and rather than just having one carbon monoxide detector down below because of the gas cooker, I decided to put one in the cockpit. Dawn Treader runs a 25hp two stroke engine strapped on the back and I have sat with this at idle on the mooring and the alarm hasn’t gone off. I’ve also been miles down towards Bradford on Avon and still nothing. But the moment I approach the bridge at Martinslade heading east towards the flight – it goes off -  usually just under the bridge which makes it echo even more.

My first instinct was it came from the same Chinese factory as that dodgy smoke alarm which would go off if you lit a match within 4 nautical miles of it and which couldn’t tell the difference between steam and smoke. Research showed 4 different types: a Biometric which basically changes colour if CO is present – good but not too clever if you are asleep... and an electrical type which somehow measures an electrical resistance across probes. There are two others, but seeing as its difficult to grasp how the basic electrical trickery one works we will leave that there.

The next question is how do they measure it? Basically, anything above 70 parts per Million is harmful and interestingly it’s an accumulative affect and according to my NHS wife once CO is bonded to your haemoglobin it has a half life in the human body of about 5 hours which means half goes in one hour then half of what’s left in the next and so forth. There are charts on the internet but as a rule of thumb anything after 200 parts per million would have Chris Whitty on the telephone sharpish.

Next, obviously it is the engine producing it. But do some engines produce more than others? – after all we are all standing on or near our exhausts so why isn’t the average barge helm keeling over like cluster flies? Apparently, Diesel engines produce less CO than petrol engines. Though I think this is relative so I still wouldn’t poke your nose up the exhaust. It would seem that  carburetted petrol engines are the worst offenders, mainly because they are crude and you can’t really alter the air fuel mix,  which leads to incomplete combustion and thus CO. Interestingly, modern injection type petrol engines produce 11 percent less than carburettors. Fun though the facts are, they don’t solve the mystery of why, where or when it happens.

Ok, first I have the canopy up most of the time - I have noticed an increasing number of barges with various tents on the back making life a bit more comfortable. This warmth does mean that air is sucked in from the outside; an affect that is noticeable if you undo the engine bay hatch as cold air will always want to equal out the difference in pressure. Secondly I have never known the wind blow other than straight down the canal at this point – in fact it’s so good at doing it, you can sometimes poddle along in neutral at almost the same speed which makes meeting some one at this bridge point an interesting experience.

Remembering that the CO detector is quite a clever device and measures an accumulative amount of CO, this is what I suspect is happening. 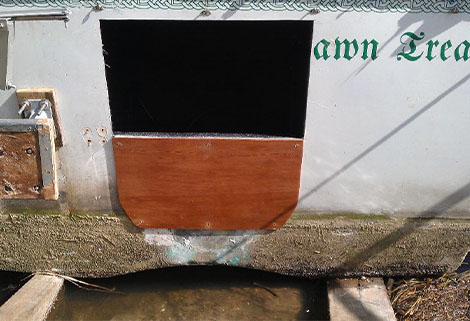 We are all exposed to a small amount of it when we run our engines, but generally the wind etc. takes most of it away. But the CO detector has already received a certain amount. However, at this very point in the canal I slow up for the bridge, which is on an acute angle so you can't see under it. The canal is in quite a deep cutting with high hedges both sides and steep banks with the wind directly behind me, so momentarily the exhaust gas catches up with me and briefly exceeds the level.

Surely then all cruisers would suffer the same – Dt has a slight design fault with her replaced transom – it’s a big hole to fit a big out board and it just so happens that the exhaust is midway down the opening making matters worse. I am interested to hear if anyone else has had similar problems.

So, how to cure it – my thoughts are to make a Perspex hatch. Perspex is a fantastic boat material – just make sure its clamped down tight between two boards before you cut it, after that you can easily bend it using some deft passes with a heat gun. It polishes and cleans easily with Brasso ( try some on your screen) and seeing as Boris has just announced more measures I can self-isolate in my shed doing boat projects – watch this space!