notes from a waterways chaplain

notes from a waterways chaplain

brrr… shiver me timbers… now the cold follows the hot!

It’s a wet and grim autumn as I write this, but it follows an unusually brilliant summer which raised quite a few issues for water levels around the country.

My open day boat, a 20’ steam launch called ‘Mazeppa’, with its tall funnel an inch or three over canal gauge had no sweaty moments with low bridges this year (!) but now she’s all wrapped up against the winter cold and sitting slightly forlornly on her trailer in the garden…

In my patch, Hampshire County Council (the Basingstoke) and the National Trust (the Wey & Godalming Navigations) have had, respectively, to face seriously low water levels and unusually heavy weeding, both of them legacies of lots of very hot sunshine.

That means things round here have been pretty quiet this autumn and Chaplains’ walks have been much more about engaging people on the towpaths and something else too: the business of ‘prayer’.

The Waterways Chaplains take that duty very seriously but we know it’s not much understood. We wouldn’t call ourselves ‘religious’ people particularly and for us there’s nothing mysterious about it: it’s not a case of telling the Almighty what we think he ought to be doing; much more it’s walking and observing, doing some serious reflection on what we see and offering that to God.

Chaplains nationwide – well over 70 of us now, some liveaboards, some simply based near canals or rivers - are linked by a WhatsApp group which is very discreet but gets the whole team mobilised. At all hours of the day the phone will buzz to itself and we find a message which simply says ‘pray for boater B: serious stroke’ or ‘Can we pray for Boater H recovering from an operation but under pressure to move his boat’.

So we pray: we don’t know who boaters B and H are, where they are or even which chaplain is involved. But that’s not a problem: our chaplains are of many different denominations, all bound together by the thought that God is big enough to know the ‘where’ and the ‘who’. So we pray a blessing on those people in difficulties knowing that there’s other stuff going on behind the prayer alert.

Chaplains may be visiting the isolated patient in hospital, likewise the stroke victim, and may even be drawn into advocacy with the relevant waterway agencies if a boat can’t be moved or a licence paid while the owner is hors de combat.. So for us, prayer is practical: not about telling God what to do in some kind of blindly self righteous way, it’s about engagement with real people in his name… 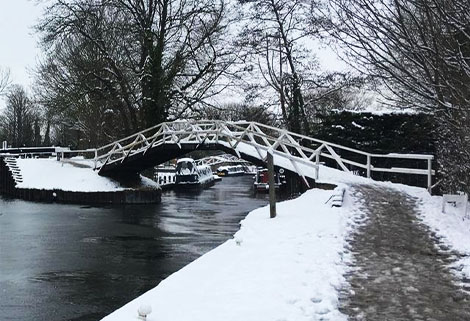 It’s quiet here on the Wey and the Basingstoke, yes: but now that winter is here, the challenges really start for new liveaboards and continuous cruisers around the network.

We’ll see the usual pretty snowy pictures on the cover of the waterways mags, but behind those stories sometimes are, sadly, tales of people out in the cold both physically and emotionally.

Some may have problems because of present hiccups with the benefits systems, technical problems with their diesel heating systems, flooding for those on rivers, and mud, mud, mud all over the towpaths which can be a bit depressing when living in a relatively confined space. Most of all, winter conditions isolate, particularly as Christmas approaches, and that’s where our chaplains can make a difference, just being around, being aware and being a bridge to the wider world: Oh! And doing that praying thing…

The Waterways Chaplaincy wishes everyone a very Happy Christmas and a good New Year. We are there ‘to come alongside you’ so keep an eye open for the people in the black gilets!