Since my last article, it would appear the country and the rest of the world has been turned upside down and shaken. Fuel prices have doubled, electric will be a luxury – gas out the question and if you read the gloom merchants then fresh air is soon to follow. 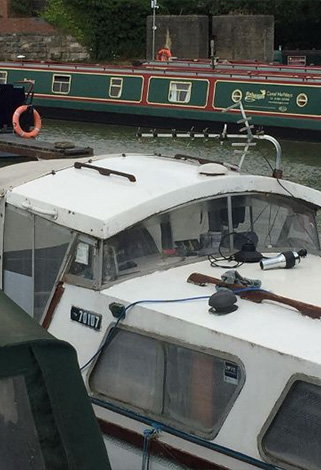 It’s been the same most of my life. However, over the years I developed two skills, how to make any old boat go as fast as it can, often beating far better (certainly better looking) and probably more capable vessels than my own as I learnt one thing about boats – motorbikes anything you wish to power along in a hurry. Lightness is everything, followed closely by a nice smooth passage through the water devoid of sudden jerky movements and over correction. Anticipation is everything.

Ok let’s look at lightness – how many of you have your lockers full of junk that might come in useful, indeed how many should be on some reality tv hoarder show. Chuck it and quick. Boats are designed to have a water line – push it in too deep and you affect how much more water it has to shift (displacement ) which needs more power thus more fuel to shift it along. How many have added tiles and worktops the builder never installed adding at least the weight of two or three people. You may as well chuck the gas bottle out now as you won’t be able to afford to refill it. That will immediately save 35 kilos!

Next is slipperiness! With your average racing dinghy this is easy – turn it upside down and polish the life out the hull. But how many boats have you seen with a botanical garden growing under them? Lose it! Any drag slows you down and uses more fuel.

Smoothness, now this is my favourite. Look back at your wake. It should not ever have zig zags – as mentioned in an earlier article, this is not the battle of Jutland. I have seen so many boats fighting the helm because they don’t anticipate what is happening next. Or allow the boat time to answer. Helms work by causing drag in the flow of the boat, in effect they are a brake applied down one side that turns the boat. Outboards, Z drives, work in same manner. You can quite happily steer DawnTreader with the out board in neutral as it acts as a rudder. Any excess movement will rob you of speed but more importantly fuel to get you moving again.

That may all sound simple, but I assure you will save quite a lot of fuel.

The next is engineering, my motorbike will do 140 MPG at 55 miles an hour. It does far less at 65 and equally less at say 25. Your boat is the same. All engines have a sweet spot when they are running at peak efficiency. For Dt its about 6000 revs (2 stroke) and it makes a sort of brr brr vroom vroom noise (I don’t need a rev counter: the moment the kettle stops vibrating, it's there). I see so many large boats being shoved along by small capacity 4 strokes which people think are more fuel efficient, but rather than a sweet noise it's making something a grizzly bear would be proud of as the little engine fights to get the boat to its most efficient speed, using – you guessed it - far more fuel. Add a head wind and it’s really drinking it.

There is a simple experiment you can do to back this up. Take the luggage scales you bought from the pound shop for the holiday that was cancelled due to flights, rail system, channel tunnel (ooh its like the 1970s all over again – I keep expecting to hear Slade or the Sweet on the radio) attach a line to the hook and pull your boat. The amount of force required to get it to move is the1lb per foot effort your motor has to overcome. If you have room, give it a drag along the canal and watch that 1lb per foot increase until you reach a steady speed and it will drop off, that’s your most efficient cruising speed. This obviously varies with hull design, but it does give you an idea of what your boat is trying to achieve and how best to help it.

The biggest use of fuel is the initial getting moving. My car thinks it's clever and has an electric motor that helps (yawn like British rail didn’t think of that in the 1950s ) However, I also have an electric out board and with that mounted on the back and used for low speed manoeuvres such as in locks and docking I have saved an enormous amount of fuel - as when the outboard takes over it's already moving.

"We are all going to have to tighten our belts"; "we are all in this together"; "Jam tomorrow jam yesterday" but no jam today. But the Lord helps those who help themselves and we can, but we have to really start thinking about how we use the boat, what is on board (and do I need it) and making it as efficient as possible – even if that means the thinnest coat of paint rather than B&Q tiles in the Galley. I recommend sticky black plastic!