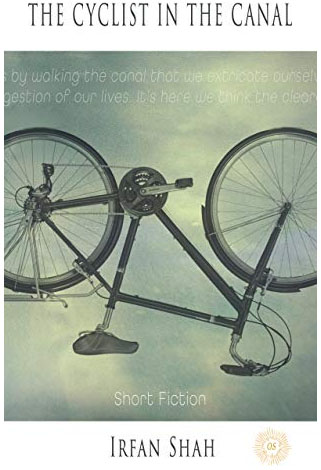 “In Rodley, the barges huddle, moored tight against the towpath alongside small wooden huts and deck chairs and sleeping pets.”

So begins the short story, ‘The Cyclist in the Canal’, a few pages that tell of an imagined encounter between two couples and a less than considerate cyclist on the towpath of the Leeds-Liverpool Canal.

The story grew from the hundreds of walks I have taken along a particular stretch of pathway going out from Leeds city centre to the small Yorkshire town of Rodley. This stretch passes a few features that have become as familiar as friends to me – boat parks; painted murals on Victorian brickwork; the wonderfully named Oddy Locks and a sign painted upside down so that it can only be read by looking at its reflection in the water:

“The remains of a wooden icebreaker lie submerged.” 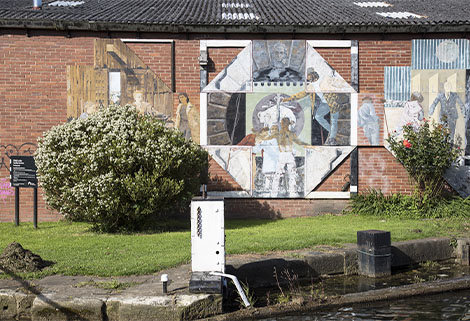 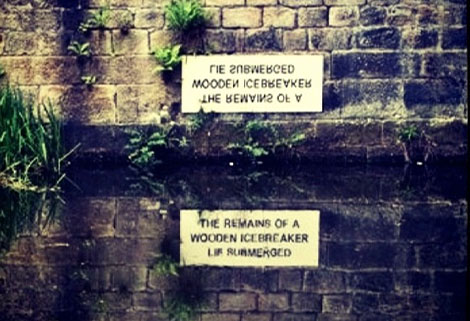 Out of this familiarity came a desire to capture the stillness and restorative beauty of the area in a story that was slightly comic and, I hope, unexpected. 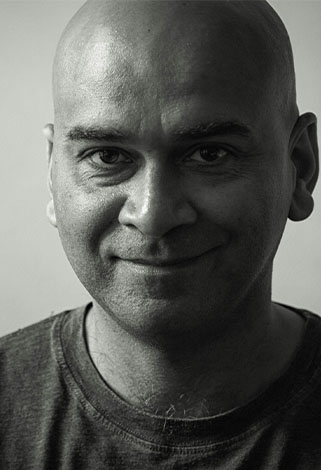 I’d become used to writing non-fiction before I wrote ‘Cyclist’.

In fact, in 2014, I was involved in the filming of a documentary about the inventor Louis Le Prince who, believe it or not, shot the world’s first films in Leeds in 1888; the crew had shot some scenes at the wonderful Armley Mills Industrial Museum, which lies on the banks of the canal about half an hour’s stroll out from Leeds.

As the director looked about for interesting shots, I was able to take him to the ‘upside down’ sign, at which point it struck me that I was showing the crew around what was effectively my own backyard; a space that I had grown to know in great detail over the years and that I had returned to, for respite and calm, again and again. 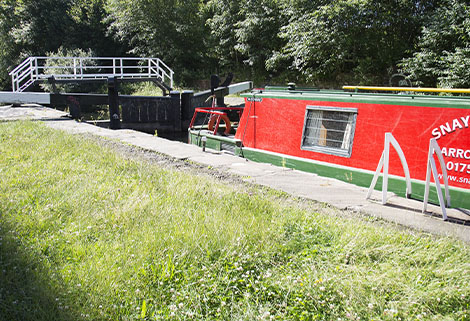 The canal-side is a shared space that is open, equally, to everyone. It serves as an escape to the country for city dwellers and after these strange days of lock-down, I hope that people will return to it with a renewed love and appreciation for what it offers us.

And while my short story is told from a ‘land-lubber’s’ point of view, you should know that all you boaters were a source of inspiration for the story, for every canal boat – whether bought at the point of retirement, or out of an impetuous decision to leave the rat race behind – represents to me, a small adventure in someone’s life.

Just as buying a canal boat often represents a change of direction in life; so too does the story of Open Space Books. My partner, Tracie, had for years worked in the trade fair and marketing industries, industries which evaporated overnight when lock-down was introduced.

Instead of becoming despondent, we decided to use the change as an opportunity to chase long-held dreams and so, Tracie’s company, Open Space Exhibitions, was repurposed slightly to incorporate a small (very small) publishing wing, and so Open Space Books was born. And what a defiant name for a company in lock-down - Open Space!