tales from the old cut 3

From almost the moment that the clock strikes midnight on November 30th, Christmas seems to begin. We are bombarded with gaudy decorations and impassioned adverts from shops vying for our money, and the concept thrust at us from all angles is that, in fact, the world is going to come to a halt for everyone to sit and do nothing apart from perhaps roll face-first off the sofa and into a tin of brightly wrapped chocolates. 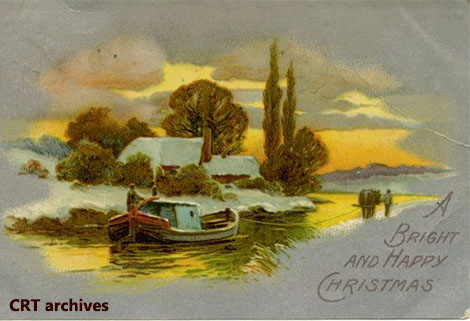 Although many people decry this as a modern phenomena, it's actually harking back to the festivities of the gilded Georgian era, when the festivities could start as early as the last Sunday before advent (Stir up Sunday, which this year falls on November 24th ), but usually it was December 6th (St Nicholas' day) that kicked off a month long round of intermittent parties, feasts,dances and general merrymaking, punctuated by heavy church attendance on Christmas day and ending on January 6th (Twelfth Night). Even poorer people would have joined in, with villages holding their own assemblies, fairs or other events. Work would have continued, but the slow pace of country life bent easily to accommodate the inevitable raging hangovers.

The Georgian boatmen and canal employees would have enjoyed quite a bit of time off during the festive period compared to their descendants; asides from the waterways regularly freezing over, it wasn't until the industrial revolution really started to take it up a gear around 1800 that boats began to get permission to move on a Sunday at all, and few employers would have expected any of their men to work on days such as Christmas. Boatmen at this time weren't the independent breed of floating peasant that Tom Rolt* liked to imagine; they were quite high up the working man's social ladder. They had homes of bricks and mortar to return to at the end of the trip, and those trips weren't very long either, a day here and a few days there. They were fairly well paid, so could afford to join in with food and gifts; one Hannah Hopkiss earned over £177 in a year between 1777-78 for her boating enterprises, and in 1791 an estimate of 2s 8d a day was given as a day rate for a Birmingham boatman. For comparison, a master craftsman building a house in Birmingham was receiving 2s 4d a day. 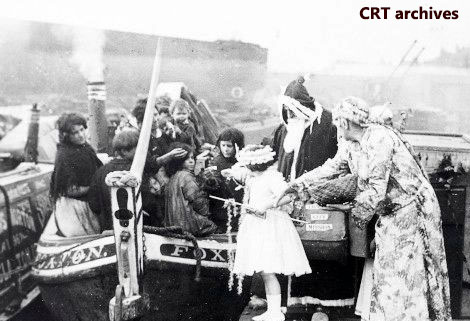 There is something of a debate between historians  as to how popular Christmas was during the Regency era (1811-1837).

Jane Austen talks of it with a casual disinterest, and as people migrated from countryside there would have been a definite change in how Christmas was celebrated by the individual, but it would be unfair to say that it was ignored.

Certainly in the canal world, Christmas was of note. Companies and owners distributed money to loyal employees, although this may have been less out of general goodwill and more out of charity as the canals would regularly freeze beyond breaking.

By the time Victoria took the throne in 1837 however, Christmas was beginning to take on the sentimental form we recognise today. It can be argued that the canals can take a heavy share of the blame for this, as this festive re-branding, with revival of 'old'  (some actually brand new) traditions and the increased pressure on charity and goodwill a response to the modernisation of life wrought by the industrial revolution, which couldn't have happened without the canals.

By 1840, the pressures of industry were turning the boatman into what we would recognise. By now the concept of Sunday off had all but vanished into the long grass for both the fly-boat and slow-boat man. The turn-around of a fly-boat was minutes, and their crew were expected to stay on board for as long as the boat had work. One fly-boater in 1840 said that he had only once visited his home in 11 years, although things appeared to have improved somewhat by 1858 when a fly-boat captain reported he was able to go home to his house in Stoke maybe 3 times a year. It will be of no surprise to say that most fly-boaters were unmarried.

The slow-boat men fared little better. Their boats were not fast so each trip took longer, and despite the official line being that they didn't have to be moving all the time, the boatmen rarely worked less than 12 hours each and every day, and in Birmingham as many as 20.

As machines were invented to replace manpower, companies came to realise that if one boatman ​didn't like the terms, they could easily find a new one from the thousands of men and boys desperately looking for employment. It was around this time that families start to appear on the boats; the boatmen began to make the shrewd financial decision to bring their wives with them, in one fell swoop saving on both rent and crew costs – the family boat was born. 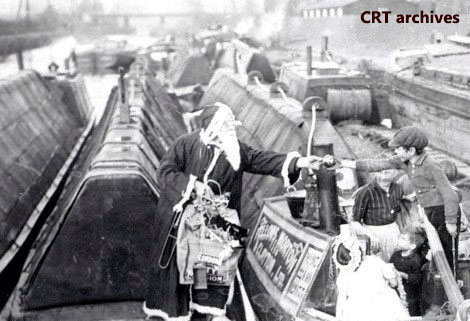 Although sources are scarce, there is is evidence that shows that the family-boats tried to make merry in exactly the same way as any of the other working class families. Stockings for children were popular by 1860 (with the recipient holding out for an apple and a penny in the toe), and from the Edwardian era to the end of carrying, various Charities (most notably the London Mission and the Salvation Army) would organise a visit by Father Christmas to children moored at inner city depots. Gifts between the adults appear to have been of the small trinket variety or handmade clothing, with boatwomen labouring for months in secret on intricate pieces like colourful spider-web belts.

Stoppages for maintenance and weather played as big a part in the location of a boats Christmas as what cargo she was handling at the time, but like all people the boaters strove to be near family for the day. Very few would move on Christmas day itself, unless it was to complete the journey to the chosen location, and many boaters would attend church. Indeed, a study of Victorian parish registers shows that, like the rest of the working class, the Christmas period was a popular time for marriages as it was the only time of the year when all the family were together.

In keeping with the rest of the poorer class, Christmas dinner was often Rabbit, poached during the journey, and cooked on the stalwart coal range. Some boat-women successfully managed to obtain a small chicken, although history doesn't relate how. Once the meal was over, a visit to the pub was usually called for. Someone might bring a melodeon and the boaters would sing and dance, with each man contributing some form of entertainment. Women, surprisingly, were not banned from these occasions. Although the rest of Victorian England tended to have very firm views on what kind of woman entered a pub, the canalside communities didn't bother at all.

But the peace of Christmas only lasted for that one day. Come dawn of Boxing Day, the normal push to 'Get 'em ahead” resumed and families regretfully parted until their next meeting. This wasn't unusual for the working class; one only has to think of Bob Cratchett getting the whole day off on the proviso he will be in “all the earlier (the) next morning.”

Like Cratchett though, surviving sources show the boaters bearing no ill-will to this. Indeed it makes Christmas all the more precious to them for its scarcity.

Perhaps this is what the modern world overlooks.