21st century boating and the internet

Despite the public image of British canals being a retreat of quiet calm and enchantment where the hustle and bustle of modern life does not reach, the reality is that today even on the rural stretches of the Shropshire union the “internet” world is ever present.  4G connectivity is now never far away and many marinas, such as here at Aqueduct Marina, now have free or accessible Wi-Fi networks (a booster aerial often helps to keep a more reliable connection inside your faraday cage otherwise known as a Canal boat!)

How does social media and the internet impact canal boaters and is it having a positive effect? There are the ever-present regulars Facebook, Twitter, YouTube and Instagram through to the specialised boat-focused groups like the Canal World discussion forum. To add to this there is the increasing number of individual blogs, vlogs and chat groups that boat owners use to share their news and activity. 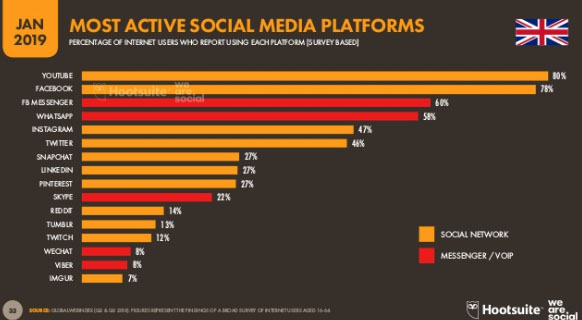 In the UK specifically, there are now 45 million social media users.

This equates to 67% of the entire population.

It is certainly the case now that any canal news (fake or real), travels around the canal network far faster than the Towpath Telegraph ever used to (and that was always pretty quick).

We suspect most people now use social media as their main means of accessing the latest boating news, be it C&RT posts or newly listed boats for sale on Apollo Duck?

Amusingly some people say they use the canals to get away from the day to day distraction and pressures of home and work, but then continue to post all about their boating trip in great detail, grumbling about every last boat that goes past at more than tick over, in the process failing to get the relaxed getaway they hoped for.

39 million people in the UK use social media via mobile phones.

As with the concerns in the wider modern society the need to turn off is as important as ever but has never been more difficult, the ping as a new message comes in is very hard to ignore. Though equally for many boating individual’s social media will provide an important social element to what for some can be a lonely lifestyle.

It would seem that even on the tranquil waters of our canal networks that being online and accessing social media channels can have many advantages. The specific boat owner and user groups and forums have resulted in boaters getting to meet, be better informed and quicker to react to changes reported on both the online canal and internet online events. Such has been the growth and interest in social media, there are now canal boat online “influencers” who regularly post about their boating life and have a following numbering in the thousands.

While there is the ever-increasing debate on screen time and ‘logging off’ from social media there are many benefits and especially for the canal boating and river networks. It opens up the door to connect with likeminded boaters all over the country and the world to share experiences and knowledge. It allows companies and users to have instant access to information and share good customer service practice.

All of this combined I feel is helping to promote the benefits of canal boating to new and interested water users.