There is a vintage question that usually gets asked in every quiz up and down the land on most quiz nights, the question being who has more canals, Birmingham or Venice?

The answer is of course Birmingham, but how come? Surely Venice with all its splendour and architecture would be a more suitable answer.

The reason that there are more canals in the UK dates back to when the Romans occupied parts of the British Isles. The Romans used to transport their goods through the waterways, using mules to pull vessels to their destinations. Although the use of carriages on the primitive roads and lanes would have been quicker, the obstacles, pitfalls and the added danger of robbery that the roads brought, outweighed any advantage of time. 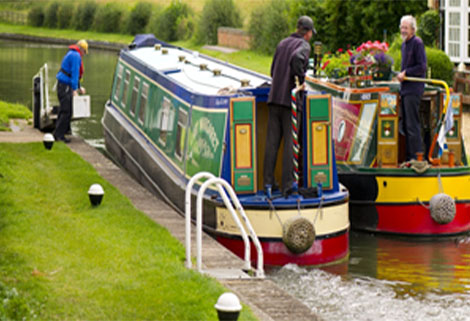 A horse towing a boat with a rope could pull fifty times as much cargo as it could pull a cart or a wagon on the roads. Boat horses were prime movers and familiar sites for years along canal towpaths. They were the powerhouses behind the industrial revolution and remained in place until the middle of the 20th century.

In the early days of the canal all boats and barges were towed by horses, mules, hinny and ponies. Even donkeys played their part.

As with most things, times change, and new inventions come to the fore. Unfortunately for the horses, engines became such an invention which effectively rendered horse power redundant. The horses were not the only thing that changed, some steel narrow-boats dispensed with the need for a rear steering desk system entirely, opting to use a river cruiser central cockpit system. For most modern narrow-boats, steering is by a tiller on the stern.

In most new mechanical inventions, there are many parts involved, especially stern tube and rudder bearings, belts and pulleys etc. Companies such as Bearingtech can help you maintain these engines and machines by supplying these parts, keeping your vessel or vehicle in working order.

The canals in the UK played a major role in the industrial revolution. They introduced the creation of wealth in industries that led to the British empire, with Britain becoming one of the most prosperous nations in the Victorian era.

Great Britain was the first country to develop a nationwide canal network system, which expanded to nearly 4080 miles across the length and breadth the country.

The canals allowed raw materials to be transported from manufacturers to customers more quickly and with less expense than using traditional methods. In the post medieval period, some rivers were converted for boat traffic, such was the demand for barges. 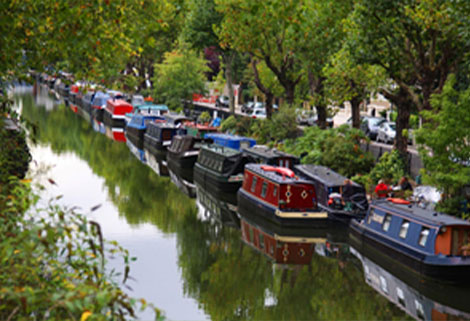 Residents alongside a canal

A golden age of canals erupted between the 1770s -1830s during which time the majority of the network was built.

However, from 1840 the canals began to decline due to the growing rail network. The railway offered a more efficient and more financially friendly means of transporting goods and merchandise, and consequently grew at an alarming rate.

From the beginning of the 20th century, the road system became progressively more important, and canals became uneconomical and were abandoned. Consequently in 1948 much of the network was nationalised. Many of the surrounding buildings and structures fell into disrepair, having been designed for horse -power. Most of them were turned into housing accommodation, riverside apartments or small businesses. Fortunately some were used as barge museums, keeping alive the memory of sailing the canals and rivers of the British Isles.

Horses carried on being used up until the 1960s on the UK canals for commercial transport, and are still seen today on certain canal towpaths, albeit for the leisure and tourism industry which has grown steadily since the early part of the 20th century. There is something quite essentially British about seeing a barge being pulled by a horse.

aqueducts were an essential part of the canal highway

museums of canals, rivers and waterways of the UK

If you are interested in the heritage and workings of the UK canals system, visit any of the above museums for a more detailed insight into how they worked.

Everybody talks about the vessels that use the waterways, but how about the locks and engineering feats that accommodate the vessels? Some of the engineering is absolutely stunning on a grand scale, the level of planning, thinking and expertise is second to none. 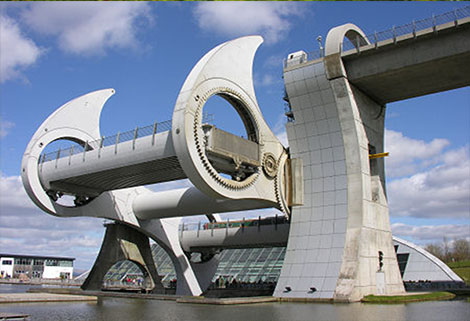 Falkirk wheel - the only rotating boat lift in the UK

One of the most spectacular feats of engineering is the Falkirk Wheel, which raises boats and barges by 24 metres (79 feet).

The Falkirk wheel is the only rotating boat lift of its kind in the UK. (The  Anderton Boat lift in Cheshire does not rotate, only lift.)

The Falkirk wheel enables connection of the Forth and Clyde Canals with the Union Canal. Opened in 2002 as part of the millennium link project, the plan was to regenerate central Scotland's canals and reconnect Glasgow and Edinburgh. It was led by British Waterways with support from seven local authorities including the Scottish Enterprise, the European regional development fund and the Millennium Commission. 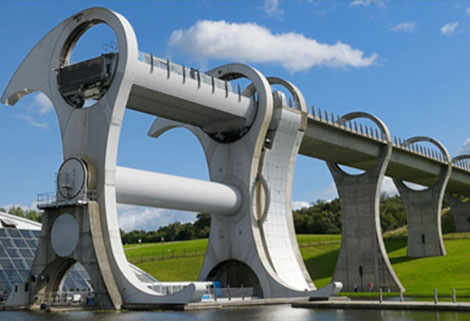 Falkirk wheel - the only rotating boat lift in the UK

Planners decided early on to create a dramatic 21st century landmark to reconnect the canals with a budget of £78 million. The joint design team of Morrison- Bachy Soletanche submitted their original design, which resembled a Ferris wheel with four gondolas in 1999.

It was agreed by all parties that the design was functional but not the showpiece that the British Waterways Board wanted. After considerable consultation a 20 strong team of architects and engineers were assembled by British Waterways led by Tony Kettle of RMJM.

The initial ideas and images were created with mechanical concepts proposed by the design team from Butterley & MG Bennetts. An intense period followed before the final design concept was approved in the summer of 1999. The final result was a co-operative effort between the BWB, engineering consultants ARUP, Butterley Engineering and the RMJM.

Amazingly the first concept ideas were modelled by Kettle using his daughter's Lego set and was based on drawings using a double-headed Celtic axe, the propeller of a ship and the rib cage of a whale. Kettle described it as a beautiful organic flowing thing, like the spine of a fish.

The overall diameter is 115 feet. It consists of two opposing arms extending to 49 feet beyond the central axle and taking the shape of the double headed axe. Two diametrically opposed water filled caissons each with a capacity of 250,000 litres.

Such was the structure's impact, the design was looked on as a work of art and the models were displayed in the Victoria & Albert museum in London.

The only rotating boat lift in the UK

narrow boats and other craft 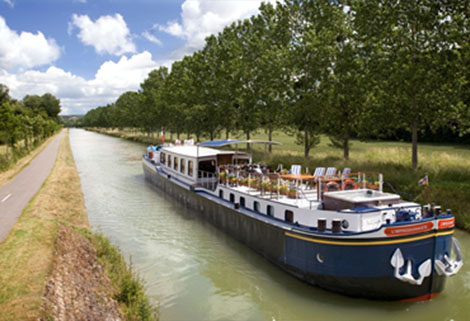 Typical scene on a British canal

Different types of boats used the canals, the most common being the traditional narrow-boat.

These were usually decorated in 'roses and castles' designs, a tradition that has carried on to the present day. When you visit most antique fairs you will probably see a piece of artwork in the mostly recognized green and red design, mainly on watering cans, urns and buckets. They are normally listed as barge art.

What`s the difference between a narrow-boat and a canal barge?

A narrow-boat is a particular type of vessel built to fit the narrow locks of the UK, to enter a narrow lock, a narrow-boat must be under 7 feet wide, so most are 6 feet 10 inches wide to accommodate the space. Usually they have steel hulls and a super steel structure up to 10mm thick with walls at between 6-8 mm.

A length of 72 feet is the preferred size for narrow-boats on our canals, anything longer or wider would be unable to navigate most of the British canal systems, with some locks being shorter than the 72 feet mentioned, it would be practically impossible to accommodate any larger vessels.

increasing popularity of boats as homes

Because of the high demand for housing and the cost of mortgages, boats and barges are a very affordable alternative. For some having the option of living in a conventional house or beside a riverbank poses a 'no brainer' scenario.

You only have to look at some of the renovation programmes on TV like George Clark's 'Amazing Spaces' to see how popular renovating a boat has become, allowing people to get on the property market (albeit not on dry land). 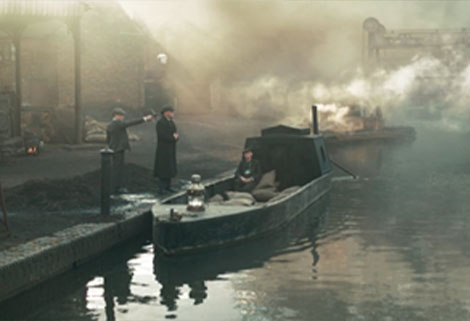 Television shows such as Peaky Blinders are bringing the canal system back to the forefront of British viewers.

Television Companies are also broadcasting celebrity shows with a canal boating theme. Shows such as 'Peaky Blinders', 'Carry on Barging', 'The Canal trip', and 'Celebrity 5 Go barging' are bringing the boating canal culture back to the mainstream. Even children can relate to the boating life with the children`s show 'Rosie and Jim' which is set around life on a barge.

Due to the increase of more people opting to live on canals and rivers, the number of boats has been steadily rising, according to the Canal and River Trust, who estimate that around 27,000 were residing in 2006, 30,000 in 2014 and more recently 34,367 licenced members.

The demand is increasing so much that in England and Wales there are over 650 km of fibre optic cables buried beneath the towpaths to keep up with the increasing demand for riverside residency.

With more and more canal-side buildings being renovated into residential homes and more permanent moorings appearing, it seems that the canals, buildings, and towpaths are making a welcome return to the British landscape.

On a final note: back in 1912, a cow named Buttercup fell into the Leeds & Liverpool canal. Rather than wade out, she decided to swim the whole 1640 yards to the end, where she was revived with brandy by drinkers in the local pub . Maybe she had a premonition of what was to come!