You may not be aware of the Waterways Chaplaincy. Our chaplains work across the inland waterways to support boaters in need, helping to resolve a wide range of issues from access to benefits and healthcare to being a listening ear and companion to the lonely and anxious. Chaplains are committed to walking one mile of their towpath each week but most walk much more than that. They are happy to chat to anyone they meet, whether it be boaters, fishermen, cyclists or other walkers, and to help in any and every way they can, if asked.

The last Sunday of February 2022 was a special day for a group of us who are part of the Waterways Chaplaincy. We travelled to Box, near Bath, to support Alice, a probationer, as she became a fully licensed and commissioned chaplain.

The Commissioning took place during the morning Holy Communion service conducted by Revd. Claire Southgate in the ancient parish church of St. Thomas a Becket. To mark the commissioning, Alice was given a windlass so she can assist boaters at any lock gates. This was presented to her by Revd. Pat Willis, the senior waterways chaplain for the Kennet and Avon canal, who had it cunningly concealed. When she whisked it out at the appropriate moment, reminiscent of a Tommy Cooper trick, it produced delighted laughter from the congregation.

The preceding talk was given by Rev. Sarah Hayes, who is lead waterways chaplain for the south of England and whose area extends from just below Birmingham to the south coast. She explained what the chaplaincy is and does. A gentleman member of the congregation, now retired, was so impressed with what he heard that he enquired about becoming a chaplain himself. 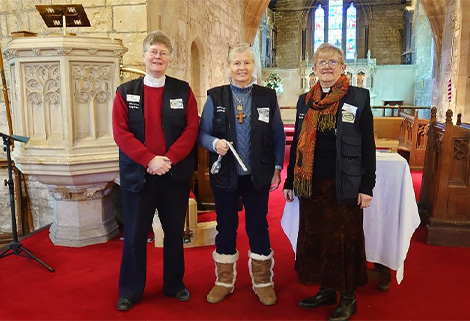 Alice is dedicated to her new ministry but Box is nowhere near a canal and, as she is without a car, it takes her more than half an hour by bus to reach her patch. In her enthusiasm, she takes all this in her stride.

Following the service, Alice’s group enjoyed an excellent lunch at The Quarrymans Arms, which advertises itself as a traditional country inn with a history stretching back over 250 years. It is sited on Box Hill, with such a superb view in the glorious sunshine that I was prompted to comment, “It is like being in a picture book”.

Revd. Pat went straight from Box to meet a gentleman on a bench on the canal bank at Hungerford, Berkshire, to assist him with filling in some complicated forms.