Home » Editorials » aftermath of the storms

Since the beginning of the year, storms Brendan, Ciara, Dennis and Jorge have battered the UK, causing problems for boat owners across the inland waterway network. During this time - from 1 January to 3 March - River Canal Rescue carried out 52 major rescues (categorised as submerged, partially sunken or grounded craft).

Unprecedented rises in river/canal levels and sudden water surges across the country separated boats from their moorings, pushing them to new locations, often on towpaths and in fields, or wedging them against pontoons and other craft. Boats unable to cope with the downpours were soon reported as submerged.

A high number of calls were from boats on the rivers: Aire, Cam, Soar, Trent, Witham and Yare, and from vessels on the Aire & Calder, Calder & Hebble, Huddersfield Broad and Rochdale canals.

RCR reports that while some vessels were easily moved, others were trapped, unable to refloat until water levels receded or indeed rose again, and there are those posing more of a challenge.

Rescue co-ordinator, Tushka Horton, comments: “From the calls coming in, you could quickly identify the path of every storm and the destruction each left in its wake. Not every case was or is a simple boat raising; we sometimes had to use divers to help with the rescue or deploy a drone to find the vessel. Some could not be accessed with vehicles, others needed plant machinery to lift them which means liaison with third-parties such as the Canal & River Trust, landowners and the highways agency, and there were a few where we had to track down the owners and secure permission to attempt a rescue.”

Managing director, Stephanie Horton, continues: “These past few months have certainly been testing for boat owners and our staff alike, but we endeavour to act as quickly as we can to secure boats in trouble. I’m sure we haven’t seen the last of these storms this year and we will continue to work with everyone to ensure they keep their vessels as safe as possible during these difficult times.”

February - a houseboat at Pillings Lock on the river Soar. Moored next to a pontoon, the water levels rose so quickly the boat couldn’t adjust itself on its pilings in time. Water poured through the doors, causing it to list at a right angle and wedge itself on the pontoon. Despite attempts from a five-man team, the houseboat was too unstable to pump-out. A telehandler and tractor were used to brace the houseboat so further pumping out could be done. 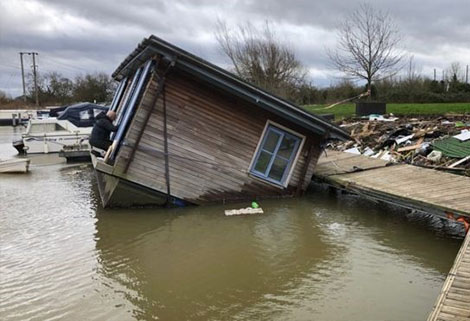 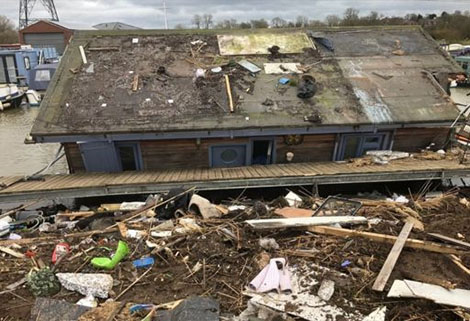 February – a 57ft narrowboat pushed onto river Trent towpath. A three man-team used ropes and scaffolding poles to manoeuvre the boat back into water. 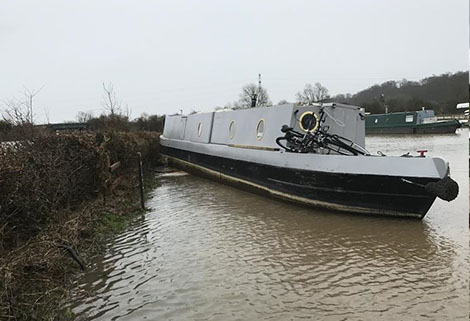 February – a narrowboat on the river Soar, left stranded on the barriers by bridge 30 at Barrow. Surging water caused it to break its moorings, sending it down river to bridge 30 where it became wedged. The liveaboard was woken when the boat hit the bridge and he had to be rescued from the boat.

The vessel was left in a precarious position, with the bow in the air and stern in the water, see-sawing on the barrier. Until flood waters receded, it was decided that a refloat could not be undertaken. Unfortunately, as the waters receded the barriers gave way, resulting in the vessel capsizing and becoming trapped between the bridge pillars and the barrier pole. Due to weight restrictions on Barrow bridge and the condition of the ground, the rescue is not going to be straightforward.

Leicester council and the tenant of the field opposite have agreed to access for heavy pulling equipment and divers are all in place. The rescue is now dependent on river levels, weather and authorisation from the Canal & River Trust. 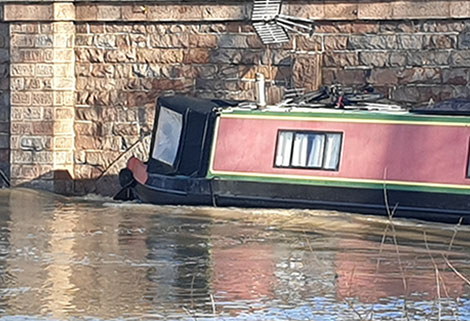 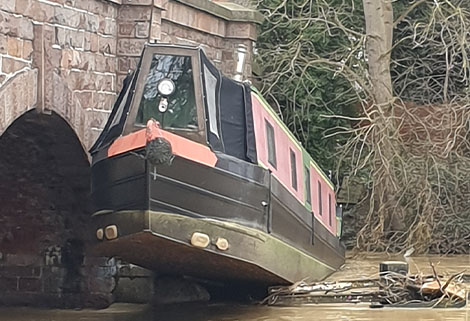 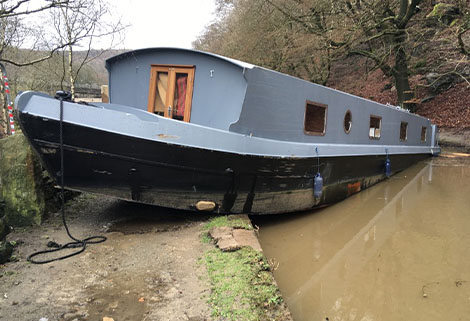 February – narrowboat at Hebdon Bridge ended up wedged between CRT working boat and bank of Rochdale canal. The rescue team had to wait for levels to lower (in between the storms) and with pumps, manpower, tirfors, ropes and their experience, released the vessel. 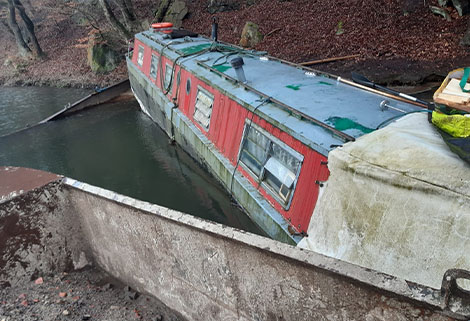 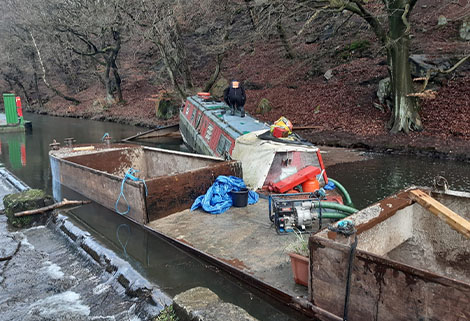 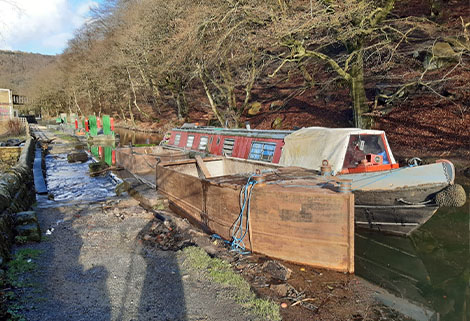