what is the right way to wire a battery bank?

Before we start, some terminology. When connecting batteries together to form a bank the cables between the batteries are called loops.

First lets look the cause of the problem. 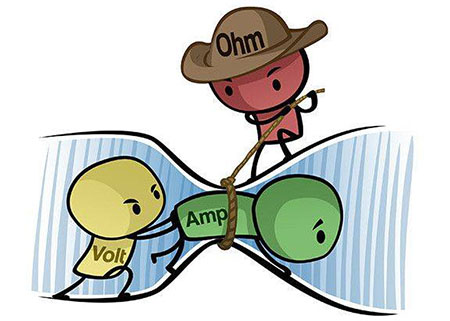 The cause is that rogue Mr Ohm otherwise known as Resistance. He makes it more difficult for the power (Volts x Amps) to reach the other end of a cable (loop) at the same level they started at. None of the wires and cables that we use in the boating world is a perfect conductor. So the power (Watts) going into the cable reduces the further it goes down the cable and the higher the current (Amps) the greater the drop.

Lets start with one of the common. but understandable mistakes, the batteries looped together and the boat’s supply taken off from the first battery in the bank. 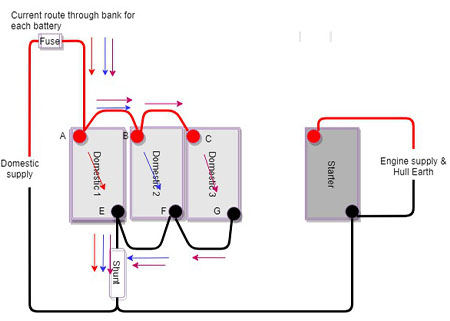 Battery 1 has no voltdrop. Because the power does not pass through any of the loops.

Battery 2 has a voltdrop of 0.0156V because the power passes through the first positive loop and the first negative loop.

Battery 3 has a volt drop of 0.0234V as its power has to pass through all the loops to reach the battery.

The majority of the power is taken from Battery 1, some from Battery 2 and even less from Battery 3. Roughly Battery 1 supplies double the power that Battery 3 does. The result is that battery 1 gets heavily used and has a short life, batteries 2 & 3 don’t get fully charged because the power does not get to them fully and gradually die of sulphation.

A commonly met way of combining batteries into a bank is a version of the above but with the connections to the boat being made to the diagonally opposite corners of the battery. It is an improvement but still not completely balanced so that all the batteries are used and charged equally. 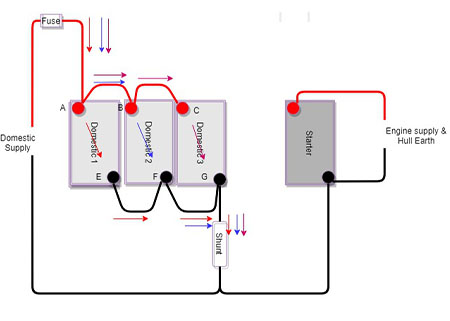 It is not unknown for Battery 2 to fail before the others.

It is better but not totally balanced.

To get the best out of your batteries I would suggest the following method; the power drawn and the charging are balanced for each battery. 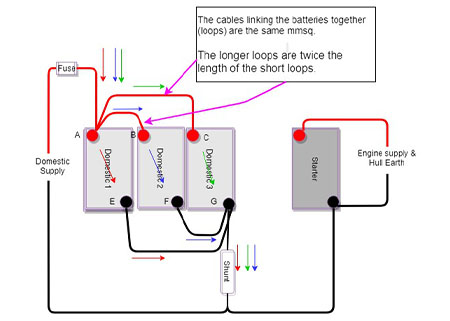 This also works for the four-battery bank 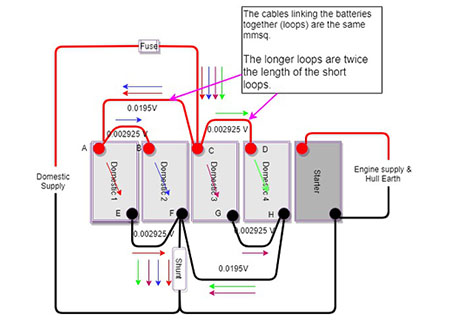 For those with a five-battery bank the only way, so far the only way to have the bank fully balanced is to use Star Wiring. This can be used on any bank of batteries but because each battery has to be fused at the battery it can cost more to do. 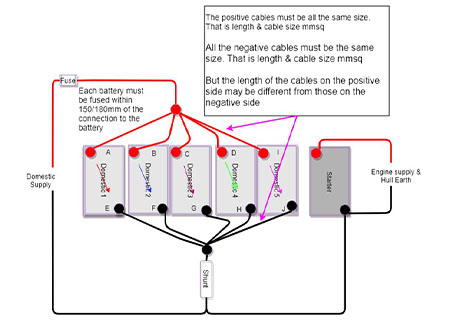 I am still working on the six-battery bank :o)