waterways chaplains are coming alongside you!

Home » Editorials » waterways chaplains are coming alongside you!

waterways chaplains are coming alongside you!

When the first moves were made to begin a chaplaincy for the benefit of people who live on and around our canals no one could have imagined how effective it would prove.

Now in operation for around ten years Chaplains are a growing ‘presence’, being noticed and recognised as a part of the British waterway scene.

Most people in the UK are aware of chaplains in hospitals , the armed forces, the emergency services, prisons and other places of high stress where they are available to support and encourage – maybe even to ‘defuse’ people in distress or under pressure. Few could imagine that Britain’s generally pretty serene waterways might also be harbouring troubled people and pastoral challenges.

But they are: and in quite large numbers. 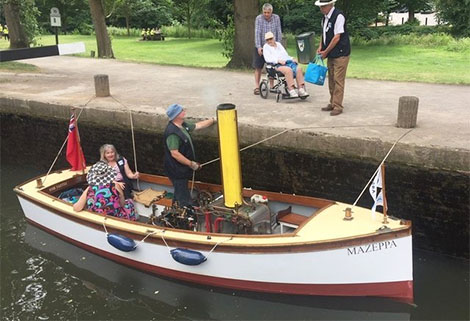 A 2008 Salvation Army report on poverty in the UK was what kickstarted things. Now there is a growing band of 75 or so Waterways Chaplains of all the major Christian denominations and they operate under the auspices of a Church of England initiative. ‘Workplace Matters’, based in St Albans, supports chaplaincies in industry, including airports and large companies.

Thousands of Britons live in very close association with our rivers and canals and a good many are liveaboards. Some of those in particular have taken to the water in the expectation of a peaceful life only to find themselves in trouble. They might be challenged by poverty and lack of access to benefits, poor physical or mental health, bereavement, loneliness and lack of the kind of social support easily available to land dwellers who are not obliged to be frequently mobile.

‘Waterways Chaplains are volunteers and they undertake to walk just a mile of towpath each week – out and back – to engage the people they meet,’ says the Revd Mark Chester, Senior Chaplain in the South of England. ‘If the Chaplain happens to be a cruising boater, as quite a few are, they can turn up anywhere on the system and because they are distinctively dressed in their marked gilets they are being noticed. The brief is to be ‘pastorally proactive and spiritually reactive’.

Some of the help Chaplains give is very practical indeed, but behind it all is a discipline of prayer for those they meet.

‘There is a lot of loneliness and isolation among liveaboard boaters,’ says Mark. ‘This in turn can lead to problems with alcohol or other drug abuse and Chaplains frequently find themselves working with CRT or the EA to assist people who, for one reason or another, have found themselves unable to pay licence fees, unable to move their boats when they should, or whose poorly maintained boats, have become problematic.

When a Chaplain encounters someone who may not have had a meaningful conversation with another soul for days, that chat can be revitalising: Chaplains can help with local information about medical services, post offices, food banks and so on. ‘

The experience of Debbie Nouwen, Senior Chaplain to the North and Midlands, is exactly the same and she herself is a very seasoned liveaboard boater and former senior social worker.

Look out for Chaplains on a towpath near you!

They are there for you, and if you want further information simply Google up ‘Waterways Chaplains’.