to err is human

Home » Editorials » to err is human

to err is human

Bank holiday and not a virus in sight. Finally time to get the boat out and go for a cruise - but first what is known as a shake down voyage, the whole idea being to see what needs doing or break something close to home where it’s easier to fix.

I started the outboard a few weeks ago having left it tilted up and completely drained out of fuel. Originally this was done so the fuel didn’t evaporate and leave a carb full of two stroke oil. Now I would recommend it because the fuel goes off: just disconnect the fuel pipe and let it run out by itself.

Any way, never mind all that.  “Let go forward, let go aft" and we are off! Well at least momentarily, as 30 foot of neatly wound blue flex disappeared out from under the canopy – oops !! Resisting the temptation to hit reverse and wind a live cable around the prop, a gentle pull back on the boat hook making sure that there weren’t too many spectators and off we went again, hard a starboard. Only it didn’t - it just carried straight on. Ahh I forgot to feed the cables back through the bellows when I tilted the outboard to allow some slack .Still no harm done and finally out of the marina and down the canal towards Bath. 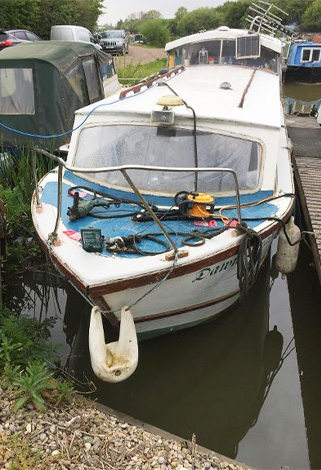 The thrill and relaxation was short lived as on a more desolate stretch of the canal we stopped moving forward, although oddly I could go back wards 20 foot or so and the same forward. Ten minutes leaning over the side and we still had a prop connected so we must be snagged. If at any time I had looked forward, I would realise we were missing something, The PULPIT !! Having removed this for painting, I had just placed it back on the deck with a length of rope coiled up just to hold it. Amazingly it made one of the best performing anchors I have ever known! Shorts on and in we go to retrieve it from around a sunken tree branch. Luckily nothing more was damaged than my pride.

Time to limp back and carry out a few minor adjustments. The outboard will run happily on 100 :1 that’s 100 gallons of petrol to one gallon of two stroke, hardly noticeable and almost equivalent to what 4 stroke will puff out naturally (if you never have to fill yours with oil it's because petrol seeps down the rings and dilutes it – just take the dip stick out and give it a sniff - trust me it will stink of petrol). Anyway, because it hadn’t been used for a while and it was cold, I increased this to 50:1 as per manual and gave the fuel a liberal dose of Redex; this cleans the carb, and scrounges the old oil and muck out the engine and exhaust system. Now the engine had been run for an hour or so, it did - vast clouds of it.

Not perhaps socially acceptable in today's climate but I have a defence. Make smoke and zig zag was one of the greatest Naval tactics of the battle of Jutland. All I really needed was a full-size white ensign and the sight of Dawn Treader suddenly emerging from her own smoke screen would have been awesome.

However, we have some sense of responsibility, so the last bit was done under electric motor making the purchase of a new battery worth the investment. I connect mine with a parallelogram alongside the petrol engine so as you steer boat it steers the pod. I wanted to extend the control wires to the cockpit but you have to push the handle back for reverse. But it moves the boat happily and the lesson is, it’s a few years old but has always worked in an emergency.

The rest of the afternoon was spent securing the pulpit with brass screws - not DIY store specials that I had to grind off to remove it, draining the carb and adding another gallon of neat fuel to get the 2-stroke mixture back up, greasing the steering, and making sure my cables ran properly before heading out again to complete the voyage with little or no drama.

Ok what did we learn? I have got rusty in lock down and what was second nature a few years ago didn’t flow as routinely as it used to do. Secondly and although I have always kept a log of each of my voyages complete with what went wrong etc., a maintenance logbook is a must. Especially when we all start jobs and forget to finish them! And lastly don’t ever beat yourself up; we live in a society where we are told we are imperfect, damaging everything around us and are generally inadequate. So who am I to rebel and go against the grain?