there are less grainy photos, but…

Home » Editorials » there are less grainy photos, but…

there are less grainy photos, but... 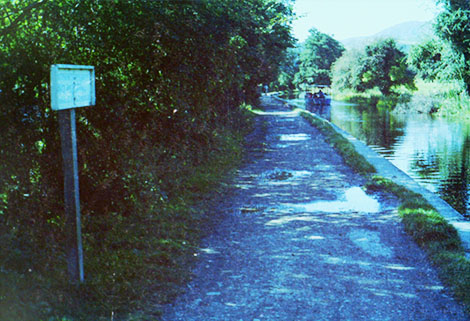 “Why do I have to call him Daddy?” the voice of a little toddler chirped as we glided along the Llangollen Canal on a horse drawn trip boat.

“Because he’s your father!” the exasperated voice of the child’s mother replied.

Also on the boat were two newlyweds on their honeymoon.   That’d be Janice and I, who’d tied the knot at Kendal Parish church around a week earlier.   Neither of us had much more than a brass farthing to our names, and I do remember sitting in a bank talking about our finances in the run up to all of this.

“I really don’t think you can afford to get married,” the manager said.

I can’t remember our joint reply, but it would have bordered on the wrong edge of polite.   Whether or not we had enough cash to wed, we did have a tent, the majority of a Fiat 850 (with some bits missing due to rust) and a month to explore wherever we chose to. 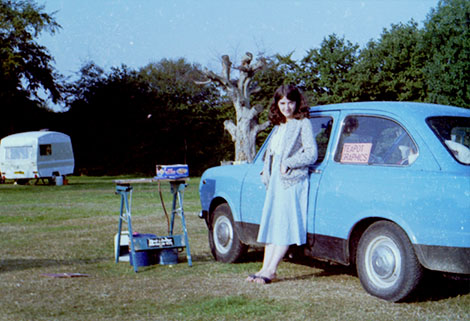 After we had decided to ignore the good or bad financial advice and marry anyway we’d actually chosen Ayr but turned the wrong way on the M6 and decided that, given that Wales was now closer, we’d pay the place a visit.   By late afternoon we’d spotted a road sign directing us to Llangollen and, given our rather undistinguished attempt at map reading, we decided it was as good a place as anywhere to go.

After pitching our little green tent, it was a fair walk down to the town and we’d paused to look at the canal when we saw the trip boat and thought it a good idea.  The run along the very narrow section of the feeder was very pleasant after the drive and, on arriving back at the town we found that a longer trip was available to take us over the Pontcysyllte Aqueduct. Unfortunately we didn’t have enough cash for that.   We did have the little Fiat though, and the people at the tea room were more than happy to give us directions. 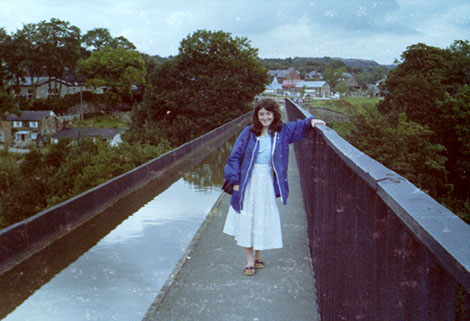 The next day we headed off to one of the most spectacular structures on the canal system, seeing little snippets of it as we drove.   Then we were there!

Sometimes the reality of a famous building isn’t quite what it’s cracked up to be but this was no disappointment.

Janice’s fear of heights wasn’t helped when she looked at the railings.   They seemed solid enough but the spacing between them made her feel that it would be relatively simple to sidestep through them, and it looked a hell of a long way down!   I’m sure that there is a small indentation in the railing even now, where Janice was gripping it for the photo.

After spending a while walking around the pathways and taking some more photos, we treated ourselves to lunch at the pub before we headed off in the direction of Chirk, to look at the aqueduct there. 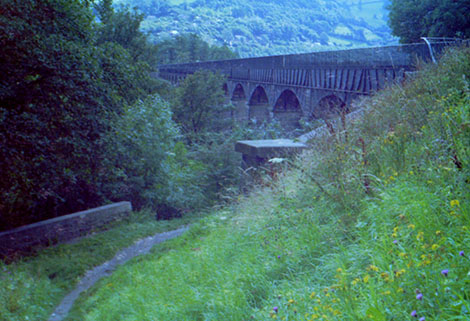 “We could walk through the tunnel,” Janice said, after we had crossed the impressive but much less frightening, structure.

If  Pontcysyllte had been scary for her, she got her revenge with Chirk tunnel.

I soon discovered that I was more than scared of enclosed spaces but, with a bit of encouragement, we got through to the other end.   The towpath though far from even seemed pretty solid even if the wooden handrail did not, and our rather pathetic little torch was not much more use than a candle once we’d got to the centre. 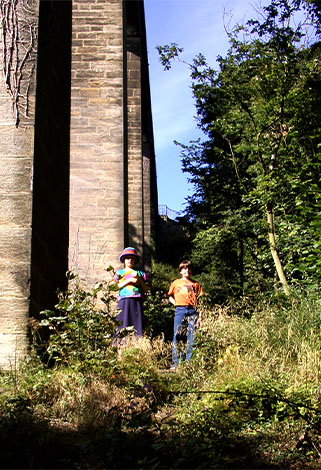 All of that happened in late August 1982, and the little toddler will now be around forty.   I like to think that maybe, on one late summers day he took his young family on the same canal trip, only to have one of his little kids pipe up in the same way as he did.

I have no way of knowing whether this happened, but one of the certainties of visiting places that are so interesting is that they make you want to visit again.

About fifteen years later we crossed the aqueduct in the trip boat with our two youngsters (neither of whom asked Janice why they should call me Daddy).

A few years later, when we felt they were big enough to walk across, we visited again and fully infected them with an interest in canals.   The place draws you like that and, each time you do visit, you can always bet that you will find something new. 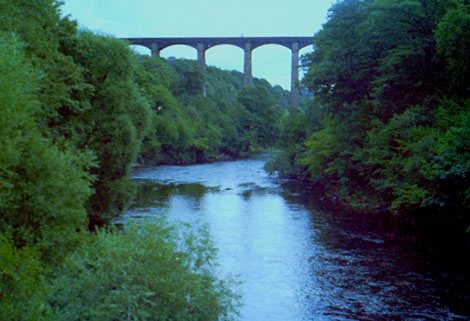 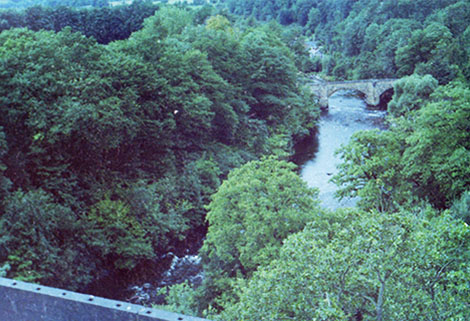 I’d always wondered what one of the  little bridges in Trevor Basin was for and it is only yesterday that I found out about the Plas Kynaston Canal (or branch canal) which used to serve industry and mines on the site of what became Monsanto’s chemical works.   When the works grew, the canal was in the way and was duly filled in with a total disrespect for its past. 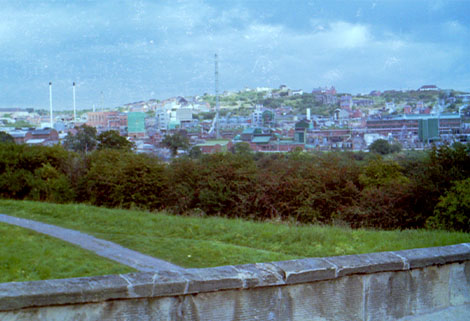 Now the works is gone completely and there is talk of the restoration of the branch.   I like to think that it wasn’t totally bulldozed  and and that, underneath the concrete, there is sufficient of the course and its artefacts left to bring it back to its former state with a good degree of authenticity.

With the branch being quite short, with no major engineering features, it shouldn’t be too hard to dig the original course back out and make it a feature of whatever the current wasteland left by the old works is destined to become.   Such a project would certainly be of benefit to the area and I wish the Plas Kynaston Canal group all the luck that they need.

As someone that always finds interest in old features and tries to follow the courses of old railway lines and canals, I am going to have to return at some point soon to see what is left of  the works and, more importantly, the Plas Kynaston branch canal.   It’s a harmless enough pursuit I guess.