the story of pegasus

Home » Editorials » the story of pegasus

the story of pegasus

Maurice Ward has been an active member of Coldham Hall Sailing Club for over 60 years and he is currently its President. In 1953, he and his brother, Terence, bought an Airborne Lifeboat which they called Pegasus. Here is Maurice's story of this very special craft.

During the Second World War, the talented yacht designer, Uffa Fox, came up with the ingenious design of the Mark 1 Airborne Lifeboat. Up until then, the aircrew from aircraft ditched in the North Sea had to rely on small inflatable dinghies and wait to be rescued. Uffa Fox's design was 23 foot long and could be carried beneath the bomb bay of a Hudson Bomber and then dropped with parachutes into the sea ready to save survivors. It was strongly built of multiple layers of thin wood and fabric to withstand the drop into the water, and contained waterproof hatches with emergency supplies and water, a cover, two inboard engines, fuel for 12 hours, a mast and lugsail, navigation equipment and an instruction manual. It needed to carry seven men and have a range of 500 miles.

Some 150 of these boats were built at Herbert Woods yard at Potter Heigham. In all, 500 were built and they helped over 600 aircrew survive.

After the war, my brother had read an article in Yachts and Yachting about converting one of these hulls into a sailing dinghy and told me that he had seen one abandoned by the sea wall at Southwold. We found the owner and did a deal. Then followed a year of hard work including replacing all the rounded decks and turning it into a comfortable sailing craft. Jack Broom made the mast and Jeckells made some dark red sails. We called it Pegasus, and she proved to be a very quick boat.

We had done no racing, but in 1957 the Northern Rivers Sailing Club held a competition at Thurne to find the fastest boat on the Broads. We took our boat, raced round the two mile course and, to our amazement, we won the coveted Cock of the Broads Trophy - even beating Norfolk Punts and Slipstreams!

After that we brought Pegasus to Coldham Hall where my wife, June, and I raced her regularly until 1986 when we decided that we needed something less physical. 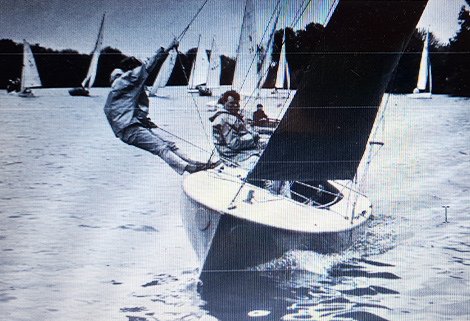