With the world in a very precarious state at the moment due to the outbreak of the coronavirus, it is reassuring to find that apart from the medical experiments and research tests that are being conducted 24 hours a day throughout the world, that another form of vaccine / protection is being developed and is proving to be a considerable success.

Danish company UVD Robots from Odense have created a robot that can destroy microbe viruses by using an ultraviolet light. Vice president of the company Simon Ellison explained whilst demonstrating through a glass window of how the process works. “We have been growing our business at quite a huge pace, but the Covid 19 outbreak has accelerated the demand for the new robots”

China especially to Wuhan where the outbreak first took place, sales in Asia and across Europe have increased dramatically since the virus spread across continents”

Mr Nielson stated that Italy on reflection had taken the main brunt of the disease along with Spain and the UK and at the moment and are in a desperate situation with the fatality rate rising on a daily basis.

Like every other country across the globe, everybody wants to try and help to curb the virus from getting worse than it already is. 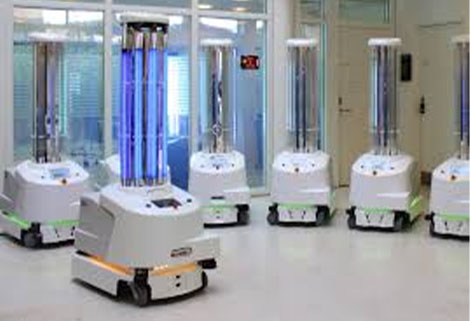 UVD robots on the frontline

Launched back in 2019 after an extensive 6 year trial experimental period between parent companies Blue Ocean Robotics and Odense University, the robots which cost £ 53,370 each, were designed to reduce the likelihood of hospital acquired infections which have surfaced over the past years and can be costly to treat due to the amount of care involved.

Because of the increase and fast spread of the virus throughout the world, production has significantly risen, and now takes less than one day to construct a machine.

So how does the robot work? Eight bulbs emit concentrated UC-C ultraviolet light that destroys bacteria, viruses and other harmful microbes by damaging its DNA or RNA, stopping it from multiplying further.

At the moment the process is damaging to humans, hence the demonstration behind a closed partition, but it is something that the companies are working on.

The process itself takes between 10-20 minutes per room, once finished there is a noticeable burning smell, something that can only be described like singed hair.

To be effective the UV needs to fall directly onto a surface, if light waves are blocked by dust or obstructions such as shadows or shaded areas, then the areas will not be treated, therefore manual cleaning is needed prior to the UV light being used.

The use of UV light is not new to the scientific field having been used for decades in air and water purification and also in various labs around the world, but by combining them with the autonomous robots they become a different thing altogether.

Professor Hans Jorn Kolmes of the University of Southern Denamrk quoted “if you apply a proper amount of ultraviolet light for an allocated period of time, you can be pretty sure that you will get rid of the organism, the type that have problematic strains that give rise to infections”.

This type of disinfection can also be applied to epidemic situations, like the current Coronavirus / Covid 19 example that we are dealing with right now. 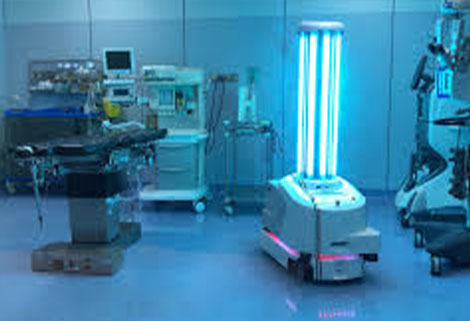 Although there is no significant proof that the robotic light can be effective against Covid 19, the experiments show that it is successful in killing other similar viruses such as Mers and Sars which have been killed by the use of the ultraviolet light.

Associate professor Dr Lena Ciric who is an expert on molecular biology at the University College London agrees that UV disinfection robots can help fight against the disease, she added “the robots are not silver bullets, but they do provide an extra line of defence alongside any medical or chemical breakthroughs”

Because we are experiencing more and more patients being admitted to our hospitals around the world, its more important than ever to be on top of the cleaning and decontamination routines, these robots definitely work in that area.

American company Xenex have also developed a robot called “Light Strike” which has to be manually put in place, but delivers high intensity UV light rays from a U shaped bulb

The firm has seen a huge rise in orders since the onset of the virus mainly from Italy, Japan, Thailand and South Korea.

Xenex said that numerous studies show that the Light Strike is effective at reducing hospital infections and combating relevant super bugs. One Texan hospital used it in their clean up operation after an Ebola case back in 2014.

Due to the Light Strikes success, more than 500 health clinics and hospitals throughout the US and beyond have installed one into their facilities.

In California and Nebraska it is already being put to good use by sanitising hospital rooms where coronavirus patients have been receiving treatment.

China has seen an incredible swerve towards new technology to help fight the disease, with the nation having the highest spend on drones and robotic systems.

Both Japan and China have been seen for years as the forerunners where technology is concerned, one thing is for sure, they will not stop until they find the solution. 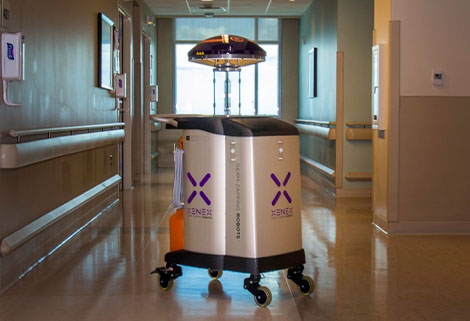 Robots have been used in a vast range of tasks for years, mainly for disinfection, deliveries, medical devices, waste control and temperature checking, so this is not new technology as such, but a merging of mechanical and medical minds.

Research Manager Leon Xian of IDC China said “We think this is a breakthrough for the greater use of robotics, both for hospitals and in public places”

Although the robots are efficient, humans have a natural sense of caution when it comes to change of their normal routines, ultimately time will tell and now is certainly the time to do so.

Because the virus originated in China, home grown scientists and technicians have been spurred on to create and develop a type of anti-body / vaccine whether it be mechanical or medical.

One such company YouiBot of Shenzhen were already developing autonomous robots, by adapting its technology to make a disinfection device which can be moved by using wheels and castors automatically, placing them in places without the use of any manual labour.

A YouiBot spokesman said “We have been trying to do something to help, for us technically it is not as difficult as people imagine, it is just finding the right formula, like building Lego”.

We have already supplied factories, offices, airports and hospitals in Wuhan.

The machines are running for 24 hours a day, checking body temperature during the day and are killing virus spores at night.

Due to the devastating affect the Coronavirus has had on manufacturers, plants, and engineering  facilities, there has been a major problem getting parts and accessories to keep production and assembly lines moving, when a vital component is missing it slows down the production and hampers development.

Companies such as Bearingtech can help to solve these problems by supplying such parts and accessories to all major and minor establishments to help keep production moving in the right direction, which helps to keep the assembly lines and food production conveyor belts rolling.

Unfortunately most epidemics do not bring good news, when one does appear, companies including research labs, chemical companies, technical plants and inventive institutions step forward and try to solve the problems that they bring, the robotic side of technology has and will help in this situation. 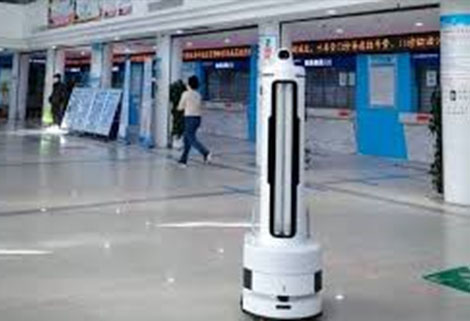 We are at present in the midst of the worst peacetime catastrophe since World War 2, when faced with problems or conflicts the human spirit and nature is to survive and to protect what we hold dear to us, whether the threat comes from an epidemic or military force, one thing is certain we must and will stand together and share our information for the good of all others, be sensible and think before we act no matter what this disease throws at us.

There is no doubt that this virus has got far worse than anyone expected, but be assured the people of the world will not rest on their laurels and wait, we will do whatever it takes to combat and defeat this threat to mankind.

This might not be a war in the conventional mould, but everyone on the planet will turn up, take part and defeat it!