revisiting the tidal trent, cromwell to torksey - lincoln and boston

We first ventured onto the tidal Trent during our inaugural six-month narrowboating experience in 2009. Naively, we had little idea of the challenges of navigating a tidal river. Though to be fair, Barry says he did. As a laid-back Kiwi, unlike me, he rarely worries or over-thinks. I vividly recall being confronted by a gigantic gravel barge sitting low in the water as I turned a corner. Thankfully for us (though sad for the industries they supported), the gravel barges stopped navigating the river in 2013, the year we returned to England.

Listening to fellow boaters over the past five years, it seems many avoid this section of the inland waterways. Despite a hair-raising experience when Barry misjudged the flow and our previous boat Northern Pride 'crashed' into the wall adjacent to Keadby Lock, earlier this year we were both keen to venture back down the river and re-visit places of interest along the route. 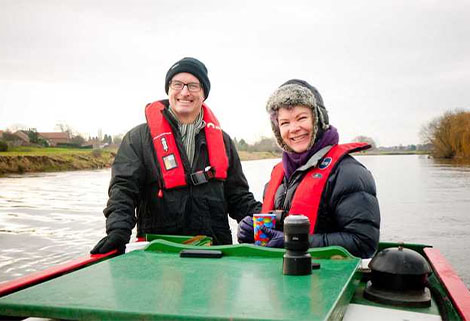 From Newark to Saxilby we had the pleasure of Richard Parry's company, the CEO of Canal and River Trust. He confidently undertook most of the driving. There are good moorings, a number of pleasant pubs, and a railway station in this pleasant village.

Journey times on the River Trent must be planned around tide-times. Lock passages are booked in advance with the respective Lock-keepers, who phone the next lock-keeper in advance so they know approximate timings, and would raise an appropriate alarm if boats don't arrive as expected.

With more experienced eyes, and time to explore, we were enticed by a melange of memorable places along the route. It's recommended to split the journey north into short bursts rather than all at once: 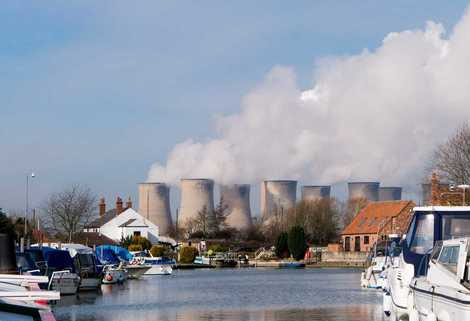 A sharp right into the well-maintained Torksey Lock provides access to the 11 mile-long Fossdyke Canal. Many publications state the canals of Britain began at Worsley, thanks to the unrequited love of the Duke of Bridgewater.

However, the Romans built the Fossdyke Canal reputedly in 120AD. Similar to their roads, this waterway is as straight as a dye for miles. The Danes also used the waterway when they invaded England, and the Normans to carry stones to build Lincoln Cathedral. 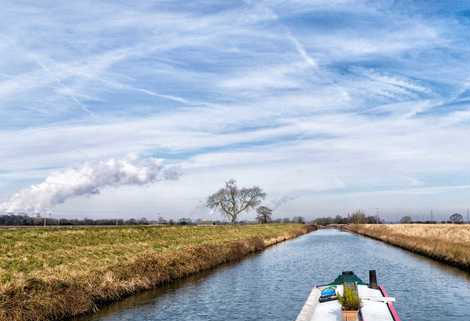 The magnificent spires of the Cathedral can be seen for miles.

In 2009 we chose not to visit the Cathedral or the Castle, being on a strict budget we didn't prioritise them in our itinerary. This time we decided to make them essential, limited budget or not! 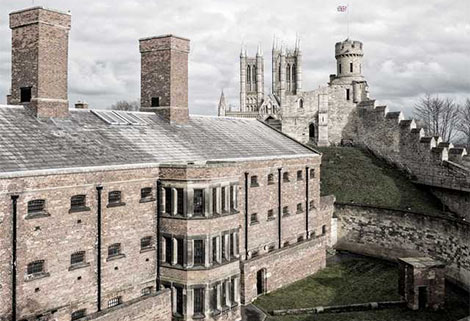 We were delighted to discover we could save 20% buying tickets to visit both historic buildings (the cheapest time to see the Cathedral is on a Sunday, when entry is free, though with some restrictions). In March the cost was £16 each - sadly it's since increased to £17.20.

For the Cathedral a return visit within six months is included - which turned out to be advantageous as we took the better part of a day just marvelling at the Castle, recently restored at a cost of £22 million. We were mesmerised by the stories in the jail, fascinated by tales walking the Medieval Wall, and amazed at the vault containing the Magna Carta - one of only four remaining. King John signed this founding document in 1215 under duress, and attempted to destroy all evidence of it after consulting with the Pope to have it annulled.

In 1976, a little known story about the Magna Carta occurred - auspiciously the same year Barry first travelled to England as a 20-year-old kiwi. The United States of America requested to borrow a copy as part of their 200th anniversary of the Declaration of Independence. The Lincoln copy was chosen, but transporting and insuring such a precious cargo seemed problematic. It was uninsurable. No commercial routes were viable. The solution was to take it by Vulcan Bomber from RAF Waddington. A member of the crew who retrieved it safely from the USA at the end of the year, is now a narrow-boater - his partner informed us it was all top-secret and highly guarded. At the end of the exercise the crew were presented with a wine goblet each, with the cathedral etched on it, and 'Magna Carta, San Francisco - Lincoln, 1976', etched on the base. 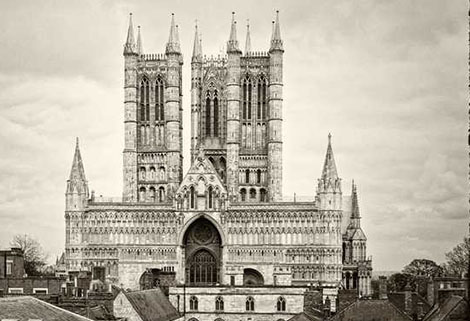 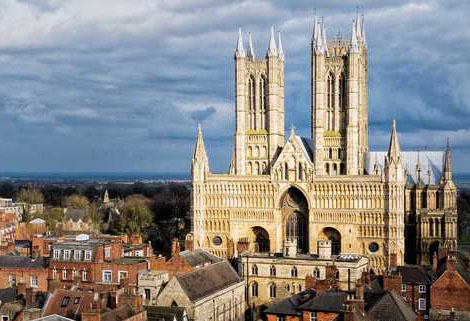 Lincoln Cathedral, originated in 1072, is magnificent inside and out. It's suffered fire and earthquake damage, the collapse of the central tower in 1237, and Oliver Cromwell consciously caused significant damage during a siege in 1644. Unsurprisingly there's continuously restoration work being undertaken. 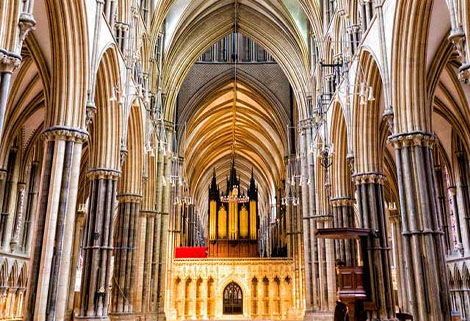 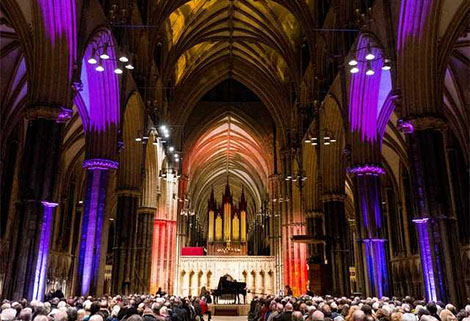 The acoustics within are remarkable. We stayed for an Evensong service, enthralled by the angelic voices of the Choir, and fortuitously found ourselves at the right time and place for a sensational Rick Wakeman concert the following evening.

We suspect this is another route less travelled, maybe even more so. Having done it we'd highly recommend it. Not necessarily for the River Witham, which, like many larger waterways can be bland and uninteresting, but for the possibilities along the route, and Boston itself. In addition we saw an abundance of wildlife and birds, such as white egrets, we wouldn't normally see on a canal.

Barry walked from the mooring to the end of the runway of RAF Coningsbury  and watched in awe as thundering Typhoons landed. 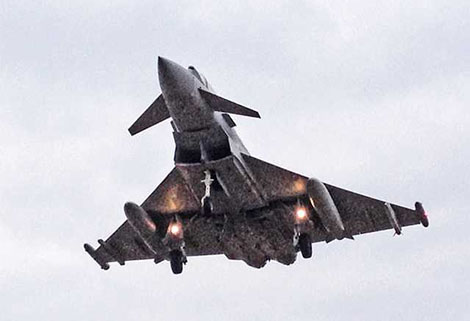 He also visited nearby Woodhall Spa, where 617 Squadron RAF 'The Dambusters' began their history-making flights in WWII . There's a memorial in the town, as well as various pubs where the crews drank. Barry's father fought for the British in WWII, so he's particularly interested in these places.

Boston's skyline is dominated by the 'Stump', which at 272 feet and 6 inches is reputedly the highest church spire in England. 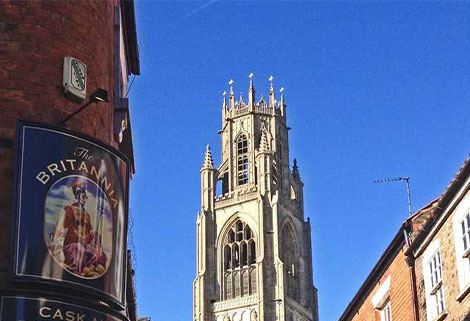 The Stump's official name is St Botolph's Church of the Parish of Boston, and was used as a marker in World War II for British airmen to navigate back to base in Lincolnshire. We hoped to climb to the top and marvel at the panoramic views across the fens, especially as we walked there on a cloudless day.

Notices nearby sadly stated it was closed on a Sunday, so we left most disappointed. The following day, in stark contrast, it was closed due to the danger of slipping on frosty stairs! Barry discovered to his annoyance it WAS actually open on Sundays, from 1pm to 3.30pm. Such a shame they openly advertised differently, and we missed our only opportunity as we left Boston the following day. Unlike Barry he made his downhearted feelings known, so we're hopeful they've now updated the notices! If anyone's visiting, do let us know.

Interestingly, in 1630 the Puritan emigrants, who followed the Pilgrim Fathers to found a new Boston in USA, were linked with the church.

The Beast from the East 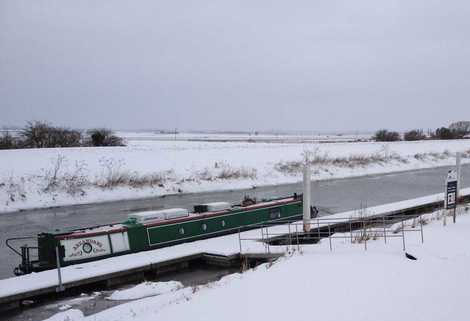 Our return journey to Lincoln and back onto the tidal River Trent was delayed somewhat due to sudden severe weather conditions, and we found ourselves frozen in and marooned on moorings at Bardney for a few days. The isolation of the area was a challenge, but also breathtakingly beautiful. Thankfully a friend living nearby put out a plea for help from anyone with a four-by-four, who brought us much-needed provisions of essential groceries and coal.

Nothing to do then but sit and enjoy living on a narrowboat and be thankful we didn't have to travel anywhere for a while...