Six years ago, I wrote an article on ‘Proper Boating’ as I had been told that my new build was not ‘Proper Boating’.  Recently, my wife, pointed out to me a social media squall on the subject.  Despite not engaging with computer forums, I have revisited the subject.

The hull must have sunk at least once; not due to the lack of skill of the helmspersons but because of age.  Including the lack of refined repairs by the operating company back when canals were used for trade.  The hull could be made of wood but more likely is of iron, with long deep rivets.  The metal thickness must be limited and the old rivets merely markers of age and ancestry, not there to hold the hull together.  If wood: several cloths must be wedged in crevasses to make the vessel watertight.  No, what holds the hull together must be an impressive array of brass plaques that one can obtain for attending boat rallies or travelling through flights of locks or along canals.  This plethora of unpolished brass spreads over the boat like acne on a teenage boy who’s each spot is a mark of a recently found hobby.  The bow of the boat must be high racked like a Viking prow and as intimidating as the tillerman’s sneer.

None of the brass has ever seen Brasso or any other cleaners (which are available).  Should any cleaning be necessary it will be with a home-made mixture including vinegar and urine.  However, like a mint Indian Dollar any cleaning will ruin the saleable value.  The engine can be dotted in shiny oil-encrusted brass. Preferably, this engine should only have one cylinder and no more than two valves, steam can flow through its veins or, if you must, some inflammable liquid which causes a musical sound.  The tenor of the sound can be varied to cause a symphony of old engine noise, but the speed of the vessel is either full ahead or dead stop.  The engine comes equipped with an individual encased in dirty greasy overalls, a soiled red bandana, paunch and beard.

The superstructure should be a boatman’s cabin with the hold in front being pure working boat, although a residential shape is passable provided it won a competition back in the Fifties – 17,18 or 19 Fifties.  The paint should be dull and multicoloured, but with no obvious colours visible.  Windows are optional but never clean or surrounded by anything which would be called shiny metal and must be made opaque by the presence of stickers advertising trade on the canals, or the current bandwagon of ‘public opinion’.

Fenders should be one rotting mass of ancient fenders made before the Great War; this mass of rotting hemp is not chained to the boat but is merely held on by age, suction and green moss.  If no ancient fender is available five old car tyres will suffice.  Rope should be the blue plastic variety, long marked by age, and gained by fishing this discarded rope from the canal system; well knotted throughout its length but with its thickness reduced by constant strain.

Light should only be available by means of oil lamps and candles, but an ex-army floodlight is permissible on the front.  The light needs to reveal the scars of war and only works when the engine is singing and a person is available to hit it with a spanner.

Washing facilities consist of a bowl of water from the cut, with clothes occasionally washed by use of the said bowl and a hand posser, anyone not knowing what a posser is should visit a local museum or ask their Gran.  Toilet facilities are provided by the local council, the Woodland Trust and Messrs Bucket and Chuckit.  The bucket can, of course be used to wash clothing in order to save space on the boat.

The superstructure should have a least one faded and ignored Patrol Notice.  It is not essential, as other canal carriers were available, but some mention of Morton, Fellows and Clayton should appear in faded oil paint somewhere on the boat.

The accompanying helmsman should have, at least, a small criminal record.  A recent survey made by myself and two mooring friends showed that they had been both been to prison twice and myself three times.  My record consists of Saughton Prison, Edinburgh, to complete a security inspection, Famagusta town nick to have released the Dhekelia Diving Team who had removed items from a Turkish wreck (no thanks ever received from them) and once in the Guardroom of 9 Signal Regt.  The latter was a misunderstanding concerning the colonel’s daughter or was it because I had removed a bronze statue of ‘Jimmy’ the symbol of the Royal Corps of Signals and buried it in the RSM’s garden, or was it both; memory is going quicker than a CRT logo.

A boat dog is essential but not necessarily a brute or violent dog; it can be a peaceful, loveable mutt but one that snaps at any offered hand when the hand’s owner is not quick.  The dog must have a red bandana but not always around its neck.

No respectable proper boater would be seen dead with a smooth empty roof, if the boat has a roof.  The space must be covered with logs, tree trunks. old washbasins. wheelbarrows, several plastic containers of strange liquid and unknowable mounds covered in tarpaulins.

If parked, sorry moored, excuse my boat language but remember I am not a ‘proper boater’, the accompanying towpath must be strewn with the detritus of life – barbecues, stolen bicycles, wood chopping block, and waste items of every description.

Above all, no conversation must be held with the owner of a glass-fibre boat sorry ‘plastic’.  The occasional grunt or throat noise may be made to any passing wood or metal narrowboat provided that does not imply that the owner of the passing vessel is a proper boater.

All complaints to the Editor, please. 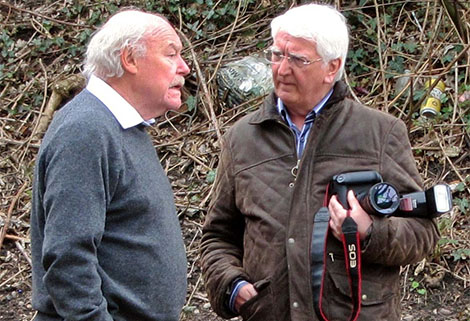 The Author ‘’Gone West’ with signs of proper boating behind...