This edition explores the intertidal zone between Boaters, Cyclists, Anglers, Walkers, Dog Walkers, Canoeists, and commercial boat trips, in, on, and around the canal network. Where required, I have used my home area as a micro-climate. However, your own areas can be substituted at your leisure.

I suspect that folks will wonder is there room for us all, who pays and what are the priorities of those in charge…

Why are our towpaths important? 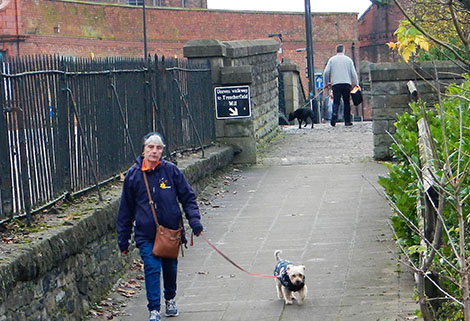 The importance of towpaths as free, accessible places to re-charge or for exercise was highlighted during the first lockdown in the spring, when we saw a surge in usage in many urban communities where the canal provides vital green space, available to millions. Towpath counters around the country showed the biggest increases in visits in Burnley (+261%), Sandwell (+199%) and Blackburn (+187%). (Source: CRT News)

Your local canal is a lifeline 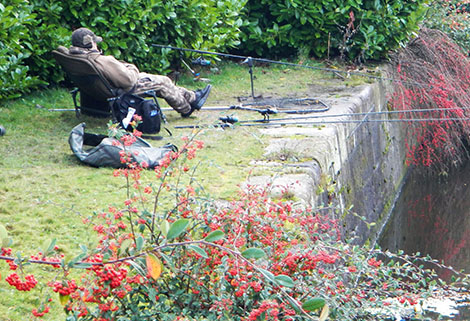 I’ve estimated, very crudely, that we have roughly 20 miles of canals in my home metropolitan borough of Wigan. Again, approximately split half and half between the Leeds & Liverpool and the Leigh Branch (Wigan to Leigh) and then onto the Bridgewater in Salford.

Using Wigans ‘20 miles of history’ and comparing with the figures from the CRT, that would suggest Wigan has about 1% of the history of the ‘beauty and tranquillity open to all’ (20mls). Pro-rata, that might suggest Wigan numbers…

Using an extrapolation from figures in a Guardian newspaper article last year (see below), suggests that Wigan could have 95 ‘live aboards’ on our 20-mile section of the water. Writers license on the maths to help visualise the amount of activity in these shared environs.

Some Money Spent on 2 Groups

Boaters and canoeists are set to benefit from a new £80,000 pontoon at Wigan. This joint project between Canal & River Trust and the charity’s Desmond Family Canoe Trail programme is great news for boaters and canoeists exploring the historic Leeds & Liverpool Canal.

The 30-metre long pontoon is next to the Trust’s new office at Trencherfield Mill in a perfect spot for getting to the restaurants, bars and shops in Wigan town centre and to nearby transport links. Twenty metres of the pontoon have been designed for boaters to use, with 10 metres built at a lower level suitable for kayaks and canoes. The entire pontoon is DDA friendly.

Boaters will be able to moor on the pontoon for up to 24 hours. There is a water point available in the vicinity and in the coming months the Trust is aiming to install a waste facility and CCTV.  [end]

For Info: On the two occasions that I have visited this pontoon, both gates or one gate was chained and locked. The access for a canoeist is most difficult with a craft to ingress or egress. In other words, really looks the part, very futuristic, but not welcoming and not thought through. From the Boater's perspective, looks to be a great mooring location, but only for 24hrs. Prior to spending the £80,000, you would have moored to the rings on the towpath as usual.

All around us in the press and social media, we see evidence of the canals being leveraged for their health benefits, their free spaces, their cycle ways, dog walks etc., But to me, it does not seem to have been planned for in the same way as highways and their ‘designated’ cycle lanes or parks with their bins for dog poo. 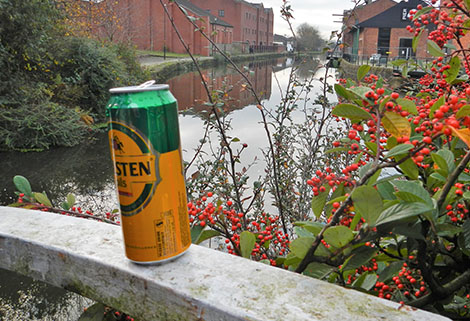 It is with a sad heart, that I notice an increase in selfishness by some users too. Almost a disregard for manner or etiquette. I was nearly run over by a bike when walking under a bridge. Later I saw a dog poo bag, a used one on the ground. Round the corner, a beer can on the fence.

In itself, I suspect most existing users of the canal system are happy go lucky and welcoming. However, I fear that this ‘new to some’ oasis could take on something of a wild west or frontier type of free for all. Almost a victim of its own success. It reminds me of the early days of ‘Free To Roam’ for footpaths in the Lake District. Followed by footpaths being worn away or the weekend arrival of 4 x 4’s and dirt bikes – a kind of juxta position to peace and tranquillity.

The extract from a Guardian article below has two words that frighten me just a little…
Drifting: could we be drifting away from the very canals we treasure?
Teeming: is there a want or the space for teeming towpaths?

Drifting into the future at 4mph: a rebirth awaits for Britain’s canals (extract with link) 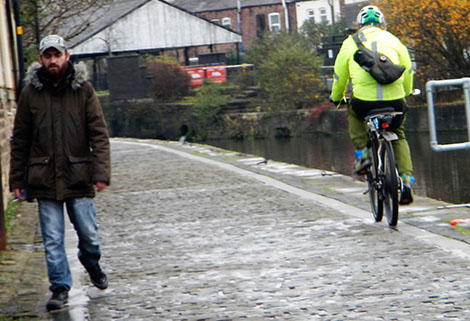 There are now 38,000 narrowboats – one quarter of them are homes – on 3,000 miles of navigable waterways, and the number of people enjoying barge holidays has doubled in recent years. Membership of the Friends of the Canal and River Trust (CRT), the waterways’ version of the National Trust, hit 28,000 this year. Towpaths are teeming with walkers, anglers and cyclists, and there are thousands of volunteers working on 98 canal restoration projects from Devon to West Sussex to Cumbria. The Inland Waterways Association (IWA), the charity that champions canal restoration, is working towards reopening 2,500 miles of “dead” canals which lie derelict.(Source: The Guardian)

As usual, I have included a few photo’s as prompts for my article and as food for thought. Ironically, you will not see a photo of a Canoe or a Boat, there were none!