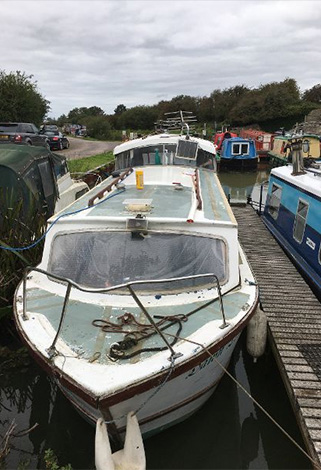 There is one major problem with Dawn Treader (DT) that has annoyed me since I bought it. It has crazing on the glass fibre. This is when the surface of the gel coat loos like smashed glass – and I suppose in a way it is. Confined mainly to the cabin roof and the decks, the internet has more causes and cures for this than the common cold. The most laborious cure being to ream out each crack with a Dremel and fill with gel coat and smooth, an option that would take me years on a 25-foot boat. Worse than that I know I simply don’t have the patience for that kind of thing.

What causes it seems less certain, it’s obviously down to aging by sunlight and / or the the gel coat mix. Originally DT was the sort of green best left on a 1970s colour chart and not revived as the darker colours absorb heat more. What ever the cause, the problem is six months after you paint it, it starts to resemble the cracking usually associated with an old master’s oil painting. Water gets under the paint and within six months to a year it's all peeling off.

The next issue is the cabin roof, this has had a hard life with me, kids, dinghies, canoes you name it, shoved on – Indeed about the only thing it hasn’t had is a Harrier jump jet land on it. Mainly because its flat. And there in lies my problem. I don’t think it has slumped it seems to have the same shallow curve as when it was built, but it doesn’t shed the water the same way some other craft do. The original design had only one support beam - Known to Dawncraft owners as 'the nutcracker' as you invariably whack your head on it. I’ve noticed this for a long time so actually installed some stiffeners, basically hard wood strips laminated and bolted in under the handrails from the inside. It stops some of the flexing but did little to improve the profile.

Ok - what I think is missing from modern life is the ability to utilise one process already proven to cure another problem. Also the ability to experiment , we rely too much on the internet for our salvation. 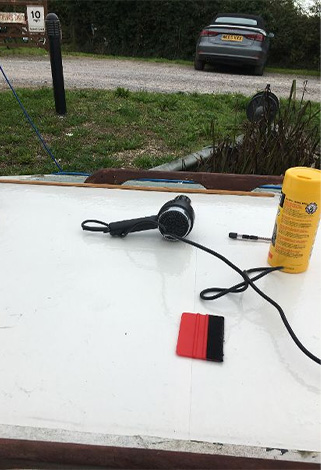 Basically, I have vinyl wrapped the roof in the same way they do custom cars. It’s a very 70s thing and an optional extra!!

First obviously sand back any rough bits and loose paint – remove all fittings and fixtures. None of which I could do because I resin them in to stop the leaks, you just have to work around it.

The trick is to work in small sheets, so I came across the deck and not along it if that makes sense. Tape down one end – the stuff wants to curl back on itself the moment you un roll it - leave your self some excess ( it trims easily) then dry the deck with a hair dryer – you need every last bit of moisture out those cracks and you want the deck slightly warm to help stick and off you go.

Once it's down, it's the same trick I used inside. Use a hair dryer and heat it up - you are trying to cause air bubbles which you can either smooth out or pop with a sharp knife. Once it cools and shrinks it looks smooth. Going around the air vents wasn’t as dramatic as I thought as it's so flexible. The effect is instant and fresh, and you soon get the hang of it. I did the whole lot in one afternoon.

Will it work on the outside? Of course, it will - as long as the vinyl has a reasonably good UV protection, after all they use it on cars, lorries etc and the vinyl graphics – a sort of Viking carving that some owner applied to my hull sides in 1990 are still very much evident (In the same lurid green). It works on DT because it is flat, working on anything with a full curve may be trickier but then they drain so don’t get the problem to start with.

As an engineer I was going to write a stunning article about E10 fuel and what it could do to your engine. But what with Covid, followed by climate crisis, fuel shortages and Xmas stuck in the China sea, who needs another doomsday scenario. Basically, E10 is more hydroscopic than E5 which means it attracts and absorbs water. It can corrode fuel pipes and carburettor rubbers. But then I sat down and realised something from years ago when common sense was in fashion: we changed these each year or so anyway, as part of what was known as a 'routine service'.