Home » Editorials » how much solar?

how much solar do I need to charge my batteries?

or - how many solar panel watts do I need?

I know it is the start of winter and the sun is not very strong or warming. But now is the time to be thinking about adding or upgrading the boat’s solar panels to be able to take advantage of the free charging as soon as it seriously starts in Mar/April. Now is the time to start thinking. 🙂

I frequently get ask how much solar do I need to charge my batteries. My answer is as much as you can afford or get on the boat.

So for this article I am going to take a reasonably standard boat with lead acid batteries (lithium batteries need less solar) with a usage of 100Ah a day. Not a lot but a figure that is easily scaled by people. Also I am going to assume the panels are flat the majority of the time and the Insolation figures (the strength of the Sun) for Milton Keynes, these figures are derived from 22 years of actual readings, so if you are north of MK you will need a bit more or south a bit less.

Lets start with the bad news first, solar electrical production varies throughout the year; so what you get in Jun, about the best month in the UK for solar production, you will not get in August and less in September and even less in December.

A solar charging system consists of the panels and a box called a solar charge controller there are two types - PWM and MPPT charge controllers, both used to charge batteries using solar power. But which works best depends on the type of climate you are in. Here in the UK the MPPT works better and on average gives 30% plus more power from our panels than the PWM does. In the tropics their performance is almost identical.

The PWM is in simple terms an on off switch that basically connects the panels output to the batteries which pulls the solar panels’ voltage down to near the battery voltage.

The MPPT solar charge controller is a more complex box. It finds the Maximum Power Point and Transforms that power to the voltages and power we need to charge the batteries. Effectively in our temperate climate it gets the order of 30% more power from the panels than does the PWM box. So all there information here is based on using an MPPT charge controller.

So back to how many panels and our boat using order of 100Ah a day. Because the power varies over the year I am going to start with the size of panel we need in June the best month of the year which is for 100Ah charging a day 455W – as I said June is the best month for solar power, in August 528W (an increase of 16% needed in two months), in September it needs 790W to supply order of 100Ah charge a day. 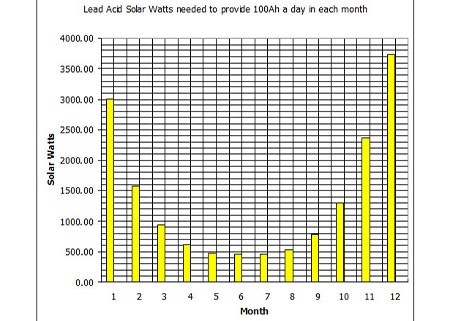 So you can see my conundrum when someone asks me how much solar do I need to charge my batteries. If you look at the chart above, Figure 1 it shows the wattage of panels needed to provide 100Ah a day. The vertical scale is 100W per line. So if you use 60Ah a day and want to know the wattage you would need to give you at least 60Ah a day from say April (4th month) to end of September (9th month) in April it is approximately 614W and September is 790W – Take the highest figure say 800W and multiply by 0.6 = 480W will give you the solar Watts that will provide 60Ah from April to September and through parts of that period you will have surplus.

The figures are based on daylight at Milton Keynes: further north needs more panels, south a tiny bit less.

For those of you lucky enough to have Lithium batteries I have done the chart for lithium below Figure 2. 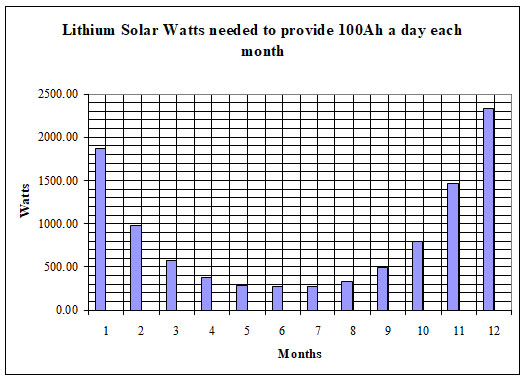 I hope this short article debunks the idea that solar power will provide all the power needed for a boat all year through, because unless you have room for something in the order of 3,000 Watts of panels it will not (at 100Ah a day) – my feeling is the average boat with 500W of power on only has a 100Ah a day Early May to Early August.

Have Happy Christmas and a wonderful New Year’s cruising!