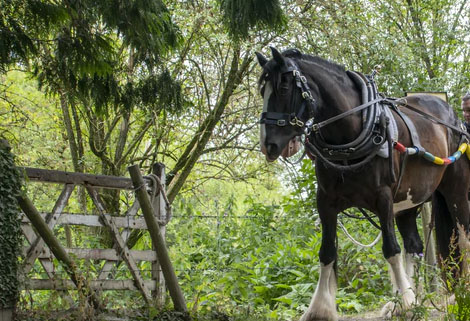 It is one of the most romanticised sights you can see on the canal, a patient boathorse quietly striding forward, its boat gliding silently behind.

In this age of ecological cares it’s not unreasonable to question whether the horse should make some sort of comeback, but what is the difference between a horse and an engine?

The combustion engine is of course doesn’t think and is entirely predictable, While even the calmest, best trained horse in the world is quite capable of looking at a perfectly innocent hedge, deciding there is a gremlin in it and leaping 6 foot into the air. In 1930, a young man named James Morgan caught the horse he was walking past by surprise and was kicked into the water. In 1890 Thomas Carrington gave his horse a smack on the bum and received a hoof to the face for his trouble.

A small child riding on the back of her family’s horse in 1930 tugged the reins and, despite it being something she had done on regular basis since she was born, was thrown from the horses’ back into a brick wall with predictable result. 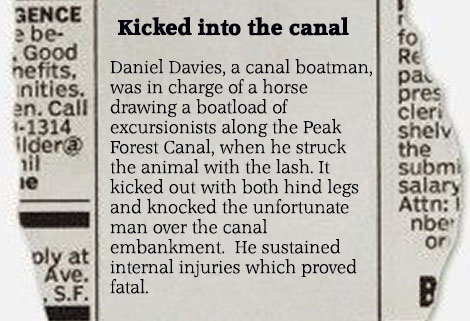 An engine will tolerate being abused with resignation whereas a horse, naturally, will not, as  demonstrated in 1906 on the Peak Forest canal, when Daniel Davies apparently decided to show off to the boatload of passengers they were towing and lashed the horse with his whip. The horse responded by lashing him with both iron-shod back hooves squarely in the chest, bowling him over the top of the embankment they were crossing and killing him.

Engine’s don’t have to be taught the job either, a task that needs to be carried out by professionals and even then it can be frankly dangerous, as seen in 1865; a pair of narrowboats, the “Elizabeth” and “Sarah” were working along the Bridgewater canal, drawn by a pair of horses working in tandem, that is, the two horses were hitched together, one in front of the other. The lead horse was an old hand at the job, which allowed 32 year old John Holt to concentrate his attention solely on the second horse, a leggy youngster learning the trade. 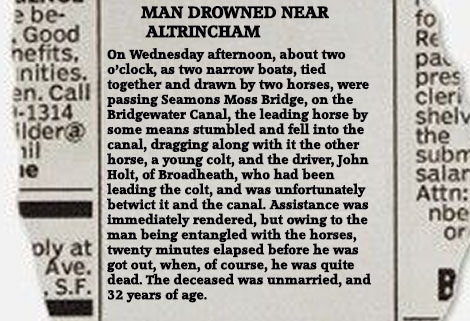 As they left Broadheath, Holt was walking by the young horse’s head on the water-side of the colt, probably because he felt it preferable to be shoved into the water then crushed against a wall if the colt took umbrage. As they came under Seamons Moss bridge, the youngster tried to quicken his pace and Holt held him back by the bridle. The inexperienced animal tried to turn, his back foot slipped off the coping stones, and he panicked.

As the youngster fell into the water, the lead horse was dragged in by the weight of his companion on the traces and Holt, still holding the bridle, was pushed beneath the water by the flailing animals. The approaching boats had no chance to stop and glided over the seething waters, while the two men on board ran forward to split the boats apart and try to unhitch the horses. Only the horses survived.

Horses can get sick, but so too can engines. The equine mechanic is a vet, and it is arguably only because of the reliance on horses that the veterinary field exists at all. 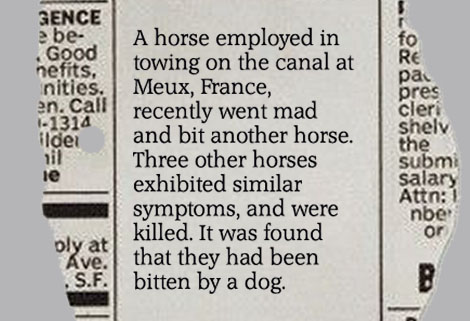 Of course in the hey-days of the horse, vets were limited in what they could do; in 1868 four  French boat horses started frothing at the mouth and ultimately went mad after being bitten by a rabid dog, and in 1886 an English horse that had been seen by a vet twice for “lethargy” simply dropped dead in what could be described as catastrophic engine failure.

Perhaps the biggest point in the favour of the engine is how it’s unaffected by the ignorance of the general public.  In 1936, a horse working through Rugby was hit by a golf ball struck from the nearby course and, quite naturally, turned tail, snapped the towrope and bolted away from the direction of the offending missile. Also dawdling about on the towpath at the time were some walkers, who leapt shrieking into the hedge to avoid being mown down, and some fisherman, who didn’t help the situation by screaming at the horse when they realised they’d abandoned a fishing rod on the towpath. The terrified horse kept running for another mile.

In 1938, a harassed bargeman collared a pair of teenagers on the towpath and asked if they would hitch the waiting horse if he chucked them a rope, and was highly surprised when they obliged him but then didn’t move out of the rope’s way, got swept into the water and had to be rescued.

In 1899, a family held a picnic on a wide bit of towpath and watched in horror as a working horse broke their china and, to add insult to injury, defecated on their sandwiches rather than “making its way around their gathering.” As no doubt it wouldn’t be today either, the reporting sympathy did not lie with the exasperated boaters although the police did concede that the horse was unlikely to have poo’d with calculated malice.