This time the Inter tidal topic is all about a true inter tidal zone in the North West of England, with Canal and River and walking and cycling and an historic Pub! Accessible from the River Mersey and PART of the Sankey Canal and road and Trans Pennine Trail. I say part of the canal, as unfortunately the canal is not linked end-to-end to the canal network. Arguably the oldest canal, but still suffering from the ravages of earlier 'filling in' and disuse in parts. The pub effectively sits on an island between the canal and the Mersey, unique I guess. So this article gives you a taster...

along with links at the end of the article where you can research further if you wish. Please note that some of my work is 'cut-n-paste' with acknowledgements, as my aim is to raise awareness for my readers, not to re-write acceptable coverage. The photo's are mine and so were the fish and chips! 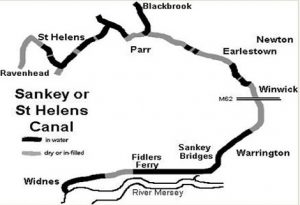 Originally known as the Sankey Canal, the St Helens Canal was built under an Act of 1757 for a river navigation following the Sankey Brook, canal acts then being a rarity. However, the engineers working on the project had other ideas and used a loophole in the act to build a ten-lock canal. It opened in 1759, and soon became busy with coal traffic for Liverpool and the salt works on the River Weaver (source:CRT) 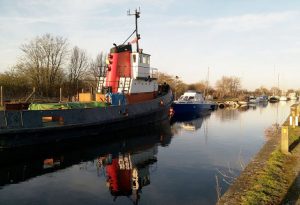 The section at Fiddlers Ferry or Penketh area of Warrington is simply amazing. Picturesque with Tug Boat, sail boats, cruisers and the like. All contained in less than a mile of canal, with a River Lock for access to the Mersey. (Tidal), next to an unmanned railway crossing. From above you have; railway line, canal, Trans Pennine Way, Pub and River Mersey. All in immaculate, pristine condition for mooching about and taking in the atmosphere and a real mix of people and characters. This environment is further enhanced by the presence of a Boat Yard, Sailing Club and Antiques shop! A real intertidal gem.

The Trans Pennine Trail (TPT) is an exciting route for walkers, cyclists and horse riders linking the North and Irish seas, passing through the Pennines, alongside rivers and canals and through some of the most historic towns and cities in the North of England. The Trail from coast-to-coast between Southport and Hornsea is 215 miles (346km) long. (source:TransPennine Trail) 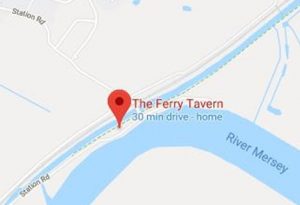 The River Mersey is a river in north west England. It is 70 miles (112 km) long, it stretches from Stockport, Greater Manchester, and ends at Liverpool Bay, Merseyside. For centuries, it formed part of the ancient county divide between Lancashire and Cheshire.

The name of Fidlers Ferry is said to come from the owner of the land Adam Le Vicleur who's name was abbreviated and became Violer which was abbreviated further to Fiddler and at that point on the Mersey was a Ferry crossing to Moore hence the name - "Fidlers Ferry".

Between 1762 and 1833, this was the end of the Sankey Canal, where boats joined or left the River Mersey. The lock became disused after the canal was extended to Widnes in 1833 but was restored in the 1980s by Warrington Council. (source:Ferry Boat Yard)

Standing on the bank looking off towards the marshes, you have a fast flowing river which bends and curves whilst offering good sailing and opportunities for bird watching. All can be seen from the comfort of the pub! 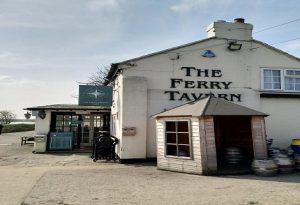 The Ferry Tavern (formerly The Ferry Inn) is one of Warringtons oldest pubs. It has arguably the best setting in the town nestling on it's own island between the River Mersey and the Sankey to St Helens canal. It is in a unique position situated on the Trans Pennine Trail attracting hikers, ramblers, cyclists and horse riders as they make their way along the trail. A charming olde worlde inn, The Ferry is light and airy in the summer where customers can take advantage of the views over the river from the large beer garden and welcoming in the winter with a roaring stove fire. Andy and Jade have been licencees here since May 2005 after taking over the business from Jades parents Pat and Terry who took over the pub in 1992 after it had been derelict for 2 years following fire damage. (source: The Ferry Tavern) 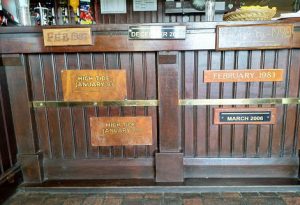 One of the first things that visitors see when they enter the bar area, is various flood height markings that have occurred over the years! They have outside seating, but no parking next to the pub. There is however a large car park next to the railway, with only a short but enjoyable walk through the majesty of the area already mentioned.

As mentioned earlier, this little gem of an area can not be accessed from the canal network. It is a little bit off the beaten track as they say – but if you are mobile or can arrange transport, or if you are moored anywhere near parts of the the trail, you could enjoy a nice walk, drink, ride or fish and chips. Don't forget the Antiques too. I've include a rough map and below there are addition links to help with further research or planning. I've been twice and the next time I will have my canoe in tow. 😉