Whenever I tell people that I live in Hungerford, home to about 6,000 inhabitants, their usual reaction is, “The scene of the massacre?” That tragedy, when 17 people were shot by a local young man, who then turned the gun on himself, was in 1987, over thirty years ago.

We tell people that Hungerford is more than the tragedy, although some who were personally affected still live here. Hungerford celebrates its antique shops, pubs, coffee bars and tearooms, an independent bookshop and butcher’s shop, a market every Wednesday morning, an annual December evening Extravaganza and the best Christmas lights you will see anywhere; they extend on both sides of the High Street for its entire length, on the trees and above the shops, with an extra large tree outside the Town Hall and another on the canal bank in the Wharf. 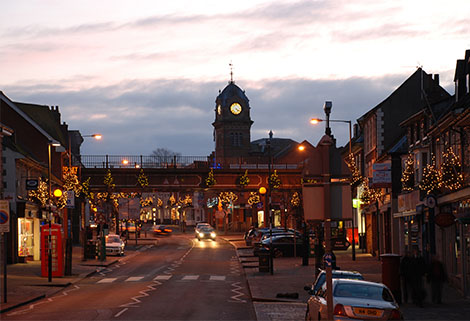 As well as a mayor and town council, Hungerford has a Town and Manor, presided over by a Constable, that has jurisdiction over the fisheries, marsh and common and owns the Town Hall and the John o’Gaunt public house. The name commemorates the third son of King Edward III who, in the fourteenth century, gave rights of fishing, grazing cows on the common and shooting (though no one does the latter any more) to the commoners, who retain the rights to this day.

Every Eastertide, we celebrate the ancient custom of Hocktide, the only town in Britain still to do so. 2020 has been the first time in its history that the celebration has had to be cancelled, because of the coronavirus.

So, next time you are in the area, after lockdown, do pop into The Tutti Pole tea room, which you will pass on your way from the towpath into the High Street, and then explore the rest of the town. You will be very welcome!