Home » Editorials » bridge on the staffs and worcs

Oh that looks nice. Cup of tea and a biscuit. Pull a chair over here, put your feet up and relax while you catch up with this edition of Canals Online.

Welcome to the first of what I hope will be many meanderings along and around the ‘cut’ as we call it here in The Black Country. We’ll delve into something here, poke about a bit there and lift a few rocks to see what scurries out.

I suppose you ought to know a little bit about me first of all. What qualifies me to write about life on and along this country’s great canal system? What exactly do I know which will inform, surprise and entertain you?

As you’re no doubt aware the waterways of Great Britain are a legacy of our former industrial and engineering heritage. I am an old former engineer, so that must be good for ticking a couple of boxes at least.

We, that is me, my wife, Kate, together with Misty, Milly (the dogs) and Billy Whizz (Shetland pony) live adjacent to the Staffs and Worcester canal, the arm which links the Trent and Mersey to the River Severn. Just past Swindon, not the one with the funny traffic islands, but the small village nestling in the beautiful South Staffordshire countryside.

That’s why this column is called Old No. 38 - it’s the number of the canal bridge which connects us to the outside world. It is also our only means of entering the rat race - I’ve often thought of demolishing it!

In fact if it weren’t for a hawthorn hedge I would be able to wave to you from just the other side of the towpath as you perhaps cruised, walked, cycled, jogged or struggled past with your fishing gear. (By the way, what is all that baggage about? Do you really need that many sandwiches? Perhaps that’s something to investigate at a later date?)

So, whilst we’re ticking boxes let’s add regular walks along the navigation to the list, as well as more than a nodding acquaintance with the aforementioned boaters, hikers, would be Tour de France competitors, budding Roger Bannisters. Oh, and hello to J.R. Hartley and his book on fly fishing. (apologies to our younger readers for those last two).

My intention in this edition, if you’ll indulge me is to take you just beyond the tow path. What was that strange derelict building you chugged past yesterday? Who built it? And why?

For instance did you know that less than a mile as the crow flies from Old No. 38 is Holbeache House. ‘Big deal!’ I hear you cry, ‘We’ve got houses up our end.’ Not like this you haven’t, with musket ball holes in the doorframe. A reminder that once upon a time there was a right old dust up here. Yes, that’s right, in the year 1605 when the gunpowder plotters (minus a certain Mr Guido Fawkes who was busy being tortured at the time) were found up here by the sheriff of Worcester and his merry men. The baddies having spectacularly failed to blow up King James succeeded in blowing themselves up when they tried to dry out their damp gunpowder in front of an open fire. Presumably this was in the days before the Health and Safety Executive otherwise they might have been in even worse trouble than they already were and would have had a good ticking off in addition to their subsequent punishment. Perhaps understandably the rather loud bang attracted the attention of what passed for law enforcement in those days before panda cars were invented. Those that survived the blast and the shootout that followed were hauled off to visit their old mate Guy, before being hung, drawn and quartered. No such thing as a slap on the wrist in those days. The date of the actual explosion, rather than the one for which Guy was arrested which never happened, was the 7th November, so the rhyme ought to be,

‘Remember, remember, the 7th of November,
Gunpowder, treason and plot.’ 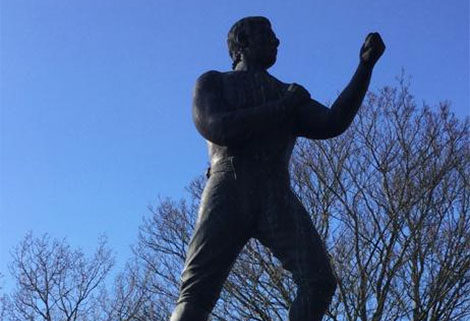 With the wonders of technology I’ll whizz you off toward Birmingham before we make our way back.

We’re now in Tipton and you might not have been so keen to be in this neck of the woods nearly two hundred years ago as you could have bumped into a certain boatman known as William Perry. He may have fought you for the right to be first through the lock. Perry also went by the name of, ‘The Tipton Slasher,’ and from 1850 to 1857 was proclaimed as the champion prize-fighter of England. His statue can be seen alongside the canal at Coronation Gardens, Tipton, close to his old headquarters, The Fountain Inn.

No you’re right, we’ll head back to the safety of the good old Staffs and Worcs, just in case the ghost of the old pugilist turns up for a quick bout. Let’s give Dudley a miss for now, though we may pop back in future for a look at the old market town with its castle that that nasty Ollie Cromwell half demolished for supporting the wrong side during the Civil War.

And for now we’ll also bypass The Black Country Museum, a working replica of the good old days, when chips came in proper printed newspaper and your granny used to rub black lead on the fire grate, oblivious of the risk. After all, those of us old enough to remember that were sucking on lead painted tin soldiers, so what possible harm could it do? This place is worth a column of its own one day, but we won’t do it now in case they’re filming an episode of ‘Peaky Blinders’ here again, otherwise we might get dragged in and used as extras and frankly, you’re not dressed the part. We’ll pop back another time, catch a tram, wander through the terraced houses, the old funfair and ‘leg it’ through the Dudley tunnels like they did before boats had modern conveniences - like engines for instance. We could even pop down the replica coal mine - if you’re not scared of the dark!

Instead we’ll head down the last canal tunnel built in Britain during ‘the canal age,’ the Netherton tunnel which is just over nine thousand feet long. Out past the Merry Hill shopping centre on the Dudley canal - no we’re not stopping, it’s not known as Merry Hell around these parts for nothing you know. From there we’ll carry on down past the Delph, through the nine locks (not quite as bad as it sounds - there are only eight).

This is the home of Batham’s brewery and a finer drop of ale you’ll not find for many a mile. Established in a onetime slaughterhouse (but don’t let that put you off) in 1877 the place is still run by the same family and is adjoined by, The Vine Inn, known around these parts as, ‘The Bull and Bladder.’ Charming!

Pardon? You fancy a bit of a break? Oh, go on then, but I’ll warn you it’s strong stuff. 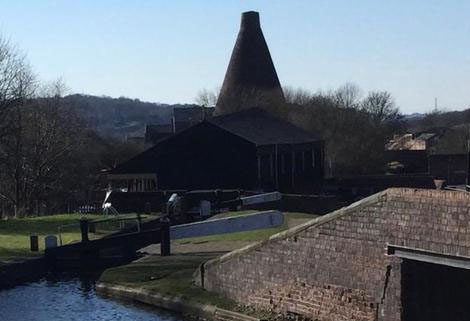 Finished? We’ll chug out past the Redhouse Cone at Wordsley which stands as a reminder that this area was (and still is) renowned for its cut glass crystal. In fact, when they made the movie ‘Titanic’ they commissioned the same glassware as was on the original vessel from these parts - and then they smashed the lot for authenticity - tens of thousands of pounds worth - watch the film carefully and don’t blink or you’ll miss it. Come to think of it, did I mention that the anchor chain for that ‘unsinkable’ vessel was made just up the road. We’re proud of that hereabouts and let’s face it, it was the only part of that ship which ended up where it was supposed to be - at the bottom of the sea.

A quick right turn at Stourton brings us back to the Staffs & Worcs. This rural setting was once at the edge of the industrial revolution because we have chugged past the ruined roundhouse at Gothersley as far as Ashwood marina, now full of moored pleasure craft but originally built for working boats. Ashwood was the terminus of the Shutt End railway, where the coalfields of The Black Country discharged their black gold for distribution to the forges of Kinver and Cookley, the industry of Kidderminster and wider afield via the river connection at Stourport. Shutt End employed one of the earliest steam trains, the ‘Agenoria’ to transport the coal the few miles required for the task. Built in the same year as Stephenson’s Rocket, by Foster, Rastrick and Co. of Stourbridge, Agenoria was the sister of the more famous, ‘Stourbridge Lion’, the first locomotive ever to run in the United States of America.

Past the Navigation pub, we’ll pop in there for a jar or two another time, o.k? Let’s face it we had rather one or two too many up in the Delph. This is Greensforge, perhaps unsurprisingly once a forge owned by a chap called Green. There are forts around here, no, not the one’s raided by Red Indians until the 7th cavalry and John Wayne turned up, but these are a legacy of what the Romans ever did for us. You can only really spot the outlines of them from the air, but if you’re walking along the towpath and stub your toe it may be an ancient fertility symbol you’ve just unearthed. (I know because a friend of mine did exactly that). This area was once the M1 of Roman times and several roads converged here. Luckily there is a local airfield at Halfpenny Green just over the hill if you should fancy a look see from a sightseeing helicopter. 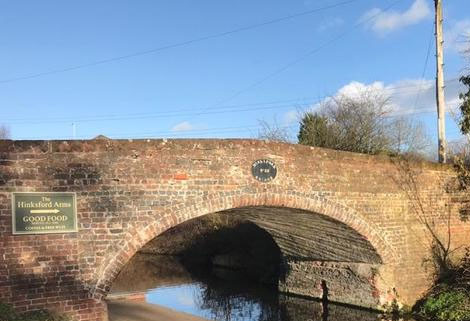 And before you know it, here it is again - Bridge number 38.

Slow down a touch and I’ll jump off here. Thanks for the ride, hope you enjoyed it. See you next time for a look over the hedges.

Don’t forget to wave as you go past.