at least your engine works!

at least your engine works!

Time to recommission DT after almost a year of lock down or if you’d rather a lesson in why second-hand boats that have been stood still for a year or more go wrong the instant you turn the key. 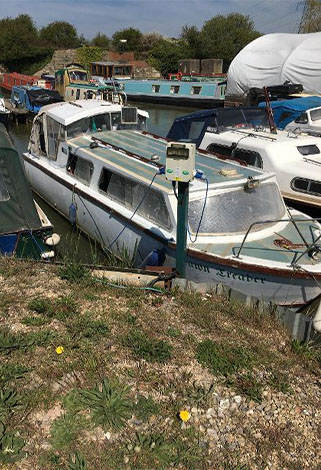 First sort the outboard which, despite the odd run up, occasionally decided not to come out of self-isolation and point blank refused to start.

Step one:  release the tilt mechanism and give it all a good shaking up and down – dunking the prop and intake in and out of the water. What this does is clean any debris out of the intake up to the impellor. I wouldn’t use a hose pipe - you will push everything further up the transfer tubes. Step one may need to start with you spraying the life out the tilt mechanism with WD40 to get it to move!!

Step two:  a good liberal spray of wd40 or similar over the engine especially the electrics and a tiny squirt up the air intake.

Step three:  taking a large spanner, or a hammer (but the spanner looks more professional...) tap the side of the carburettor fairly hard. What this does is free off the float valve just in case the liberal shaking up and down of the motor didn’t.

Step four:  (I recommend anyway) Ditch the old fuel , use clean fresh stuff with a liberal dose of Redex or similar and try and start the engine. Even if it sounds like a bag of spanners and mine took several attempts to start at all, leave it running then disconnect the fuel line whilst it is running, what this does is in its last gasp for fuel it sucks through any rubbish in the carburettor jets. I do this two or three times and was told this trick by an out-board service engineer.

Step five:  Mix in a load of fuel cleaner (I use Redex0 and leave it running for 30 minutes or so – obviously making sure you have a steady stream off cooling water, then promptly apologise to any boaters nearby as your exhaust gas will look like you have just elected a pope. Oh yeah, I forgot, temporarily cover your smoke alarm! Mine had a fit. I did have the fore sight last year to fill my tanks with a fuel additive that is supposed to stop fuel from going off. We can argue the merits of these but, like snake oil, if you believe it’s doing some good, it will, and having spent a lifetime with old motorbike engines and lawn mowers it can be a religious experience, where a little faith, even in a placebo, goes a long way to help.

Don’t forget to re grease all the points - the old grease would have gone hard putting extra strain on steering mechanism etc.

I have noticed loads of weed growth around my intake and prop. This is best cleaned off as well as any creatures such as mussels etc. which can ruin the day, but at 60 quid a tin it’s not feasible to use a commercial cleaner unless you have some left over. Notice that I have not said replace filters, spark plugs, gear box oil etc – I just said get it running even if it sounds rough.

Now you know the engine works you can start to improve things. Remember the more you tamper around with it, twiddling the carb, pulling spark plug leads off and breaking the connections, changing filters and trapping air in the system, the further into the mire you go until you have now created loads of reasons why it will not run. 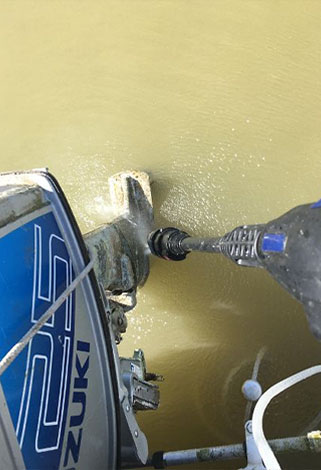 Tool of the year has to be a rechargeable pressure washer – which made short work of the green slime. I am a big fan of this bio boat cleaner, spray it on leave it to dissolve the grime and rinse off. Obviously the pressure washer found the weak spots in the paint work so a rub down (go steady with this remember all glass fibre boats have a water proof gel coat, or rather did until your belt sander removed it) I have found Hammerite smooth works wonders and in my impatience discovered a trick; sand it off before it goes hard, it fills the sand paper almost immediately but it also fills in any imperfections (almost like polishing it) and goes rock hard. The pressure washer is such fun that I did the outboard (which is why it struggled to start - got a bit damp!!), bilges, shower room and even the loo and especially the moss in the window frames.

I was going to use this super decking on DT but have stumbled on grip tape available from a major online retailer we have all resorted to in the last year or so, and dirt cheap. It was unintentional but if you are careful and lay this down nicely it looks like a strip deck! – and it has not lifted off even with a pressure washer.

My only advice on looking around the marina is do not beat yourself up because your boat looks a bit neglected. This time last year there was a possibility that we may have never seen it again and seeing as we can’t socially mix on board just yet – who cares if you have a hard wood floor, and new tongue and groove panelling  - no one is going to see it!! Mine looks good from 6 feet away and that’s as close as you are allowed.

Finally crawl into your bunk, clip up the sides and fall asleep again cocooned in your own version of an imperfect world, sound in the knowledge that it might look rough but at least your engine works.