AGMs are boring aren’t they?

AGMs are boring aren't they?

unless you are with the MNA boat club!

Normally the only way to get club members to attend an AGM is to catch them off-guard with a comment like “well I’ll see you at the AGM then” before they’ve had time to think up a plausible excuse for not attending....

So how were we to encourage a reasonable attendance at our first proper AGM since before the Covid pandemic?

The Merchant Navy Association Boat Club has some two hundred plus members scattered throughout the UK so the first obstacle is the question of a venue that suits at least a sizeable slice of the membership and then devise a format for the event that might be of interest, hopefully enjoyable and, dare I say it, even good fun! 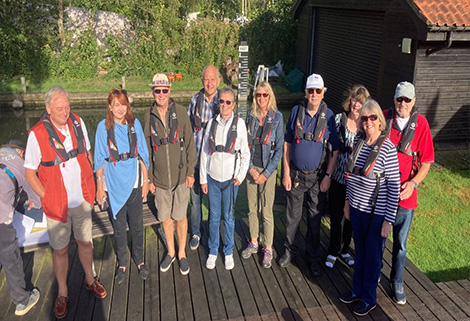 The members who attended the AGM of the MNA Boat Club

If one has to travel two hours to and from a meeting it means, effectively, that it’s taking up a whole day. If you have to travel even further it probably means an overnight stay. Frankly who would want to spend the time and money for a two-day round trip simply to attend a formal meeting? Hence, our plan for the Boat Club’s 2022 AGM morphed into one for a two-day potentially interesting and enjoyable “event” with less than one hour of the two days dedicated to the formal Annual General Meeting.

Given that the MNA Boat Club has quite a high proportion of its membership living in or near to East Anglia and that we also have a very worthwhile “partnership” with the Norfolk & Suffolk Boating Association (NSBA) to promote our “WaterWatch” safety & surveillance initiative, we decided that a series of events on the Norfolk Broads would be an attractive proposition and so it proved to be, with the bonus of all-time record AGM attendance!

After much deliberation the following events were agreed:

We obviously needed to make sure that there would be enough accommodation available near the venue at what, in early September, would still be a busy time with many holidaymakers around. We were very fortunate in making contact with three very pleasant and comfortable guest houses within 50 metres of the venue for the AGM in the village of Neatishead, where we had booked the mezzanine floor of the White Horse Inn for the meeting and an evening meal afterwards. 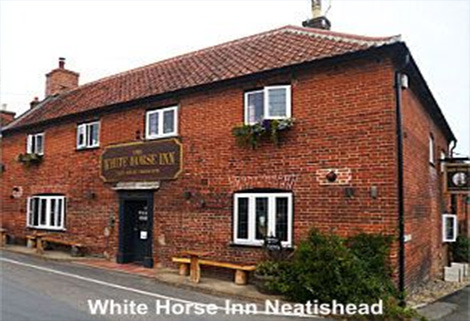 Our programme kicked off at 11.00 am on the morning of Tuesday 6th September with the visit to the Museum of the Broads. This proved hugely interesting and enjoyable, especially thanks to our being given a fascinating tour conducted by Bob a very knowledgeable and enthusiastic member of the museum volunteer team. 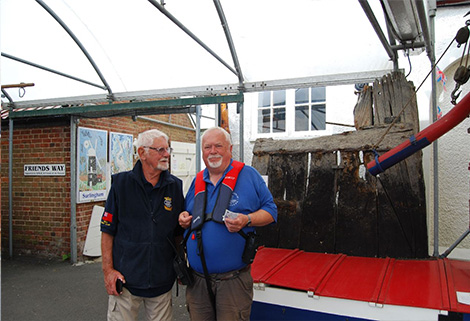 Given that many of our members attending are former professional seafarers, we were particularly interested in the old WW2 airborne lifeboat on display (one of the very few still in existence). One of our members was even able to provide a hitherto unrecorded local story about one of them. 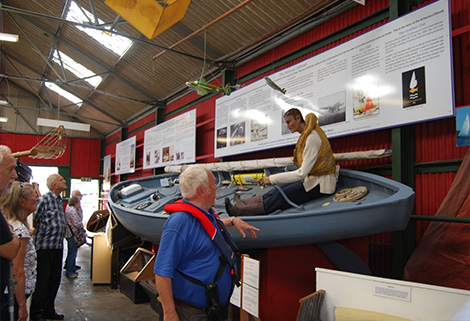 Moving on to the late afternoon and evening, having got through the AGM in good time, our members and guests proceeded to enjoy some excellent food from the White Horse’s extensive menu, including their own local “pie of the day”.

The following morning dawned fine but storms were forecast for the afternoon. Most of the members had elected to spend the morning (or in a few cases the whole day) on the wherry “Albion” sailing from her base at Womack Water on the River Thurne to Horning on the River Bure.

The afternoon was to be spent on one of our local members' boats exploring the River Ant and Barton Broad. Hence, everyone was aboard either the “Albion”, Richard Card’s “Ness Nomad” or Clive Edwards’ “Elsa II” by 09.00 at the start of what was to be an enjoyable and for some a surprisingly eventful day on the water! 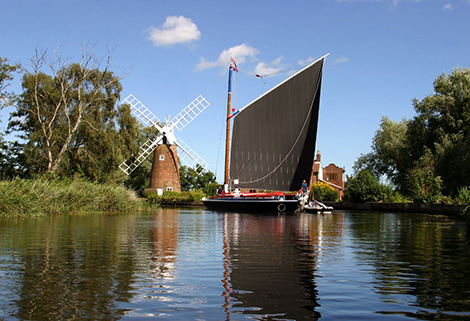 The famous wherry Albion on the Norfolk Broads

Those aboard Ness Nomad and Elsa II were able to get a good view of Barton Broad and the River Ant as well as a short side-trip to Malthouse Broad with views of Ranworth Church known locally as the “Cathedral of The Broads”.

We had planned to all rendezvous at the Swan Hotel at Horning but unfortunately the mooring for the Albion was already occupied so she had to moor alongside the opposite bank whilst Ness Nomad and Elsa II were able to moor at Horning Sailing Club where Clive is a member. With the aid of Albion’s tender, we then had to ferry members back and forth during a brief break for a sandwich lunch so that those who had spent the morning on Ness Nomad and Elsa II, including MNA President Vivien Foster OBE, were able to make the homeward passage on the Albion whilst some of those who’d been on the Albion during the morning transferred to Ness Nomad and Elsa II for the homeward leg via the River Ant and Barton Broad. 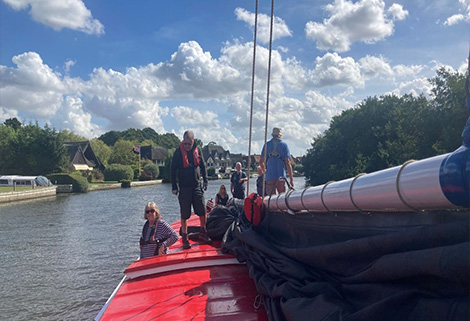 Members on board the wherry Albion

So far so good, although sadly our Vice Commodore Paul and his wife Tracey had to depart by taxi and car to attend a medical emergency back in Essex (happily turning out not to be as serious as first thought).

Up to now the weather had been perfect and seemed set fair for the afternoon despite the previous warning of storms. Everyone set off from Horning in ideal conditions for what was mostly a leisurely and peaceful sail home - I say “mostly” because two-thirds of the way into the return journey all three vessels (and Paul & Tracey’s open-top car!) were hit by a series of seriously violent squalls, thunder and lightning and absolutely torrential rain that reduced visibility to about 50 metres! As both Ness Nomad and Elsa II are motor cruisers all we had to do was reduce speed for about fifteen minutes until the storm had gone through, but the situation on the Albion was significantly more dramatic and is the subject of a separate report by one of our members, David Cornes, who was on-board at the time, along with others including our President Vivien.