(or near misses that could have been tragic) 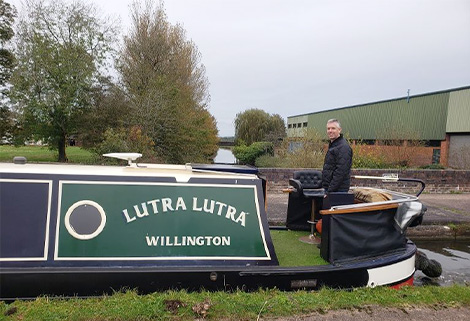 When we bought our narrow boat, Lutra Lutra, last year, we were awash with happy memories of carefree cruising holidays. We spent a full fortnight congratulating ourselves on breaking free from the tedium of suburban life and embracing the freedom of live-aboard continuous cruising. And then reality set in...

Winter was approaching, the batteries were draining every night, the engine developed a terrible rattle and we couldn't find the spanner for the gas bottle. This article was born from that creeping realisation that life on the cut can be uncomfortable and, at times, downright dangerous. Thankfully, we've yet to suffer a fatality, but then there's always next year...

Let's start with the winter. Whoever thought that spending January in a metal box floating on icy water with a few millimetres insulation and single-glazed windows was a good idea? Turns out over 50,000 live-aboards do. We originally thought that Webasto programmable central heating would keep us toastie warm, but were then informed that it should not run continuously. Besides which, it was noisy and ate up diesel. So, after a few nights wearing woolly hats in bed, we were told that we needed to keep the wood burner alight from November to March. Cue carbon monoxide poisoning.

Carbon monoxide kills 30 people each year in the UK, which is why you need to get your boat safety certificate and make sure your CO alarm is tested regularly. Our boat had a Morso Squirrel stove fitted at the bow. Burning huge quantities of kiln dried wood resulted in peak temperatures that would have been credible in the Sahara desert. However, they lasted only long enough to play one round of strip poker before plummeting back down to arctic temperatures. We eventually discovered that 6-8 large lumps of coal held closely together in a coal cage would stay alight all night and keep off the worst of the chill. There's nothing more satisfying in the morning than riddling the fire, placing a few sticks of kindling and a heat log on, opening the vents and watching it roar into life a few minutes later to boil your kettle and cook the porridge for breakfast.

However, whilst we were now cosy and warm, the CO detector was less happy. No matter how hard I tried, we consistently reached 50ppm. Now this is the limit for 8hr exposure according to OSHA. Turns out, we had one of the Morso Squirrels produced for the Norwegian market with a smoke hood above the baffle. Once removed, along with the stop that prevented us leaving the ash pan door open, the fire performed much better. But we were still cold!

So, OK, condensation isn't fatal. But ask any boater and they'll tell you that water is public enemy no1 on board, and that includes condensation. Which is ironic, given that we need the stuff to float our boat.

Anyway, it turns out that not only does condensation ruin the woodwork, bringing nasty dark stains to the surface which are difficult to bleach out (second hand oxalic acid going cheap on eBay), but when you try to heat a damp boat all the energy gets absorbed by the water molecules. All very 'exciting' for them, but not helpful for raising the temperature inside.

And we had rivers of condensation down the windows every morning and bands across the ceiling where the insulation was thin on colder days! Everyone has their own theories on how to reduce condensation, from bags of rice to carpet up the walls. Plastic film secondary glazing was £10 well spent to preserve the window frames.

However, in our experience, ventilation is the most effective weapon against condensation. Unfortunately, we think that when they painted the roof of the boat pre-sale they screwed down all the mushroom vents and it didn't occur to us to check until February. It took a good month before the humidity sensors started recording the 40-60%, which is the ideal range. And a litre of white vinegar to neutralise the calcium chloride that had turned our entire bed into one big damp trap (but that's another story).

Successes included potatoes wrapped in tin foil and baked next to the coals as we cruised and rice pudding simmered slowly on the top.

But, given the erratic nature of our fire lighting ability there were also some spectacular failures. These were compounded by the fact that we discovered that the compressant had leaked from the 12v fridge. So, our foredeck became our fridge (and sometimes freezer) for the winter. All well and good, but you definitely don't want food poisoning when your bathroom doesn't have a flushing loo! 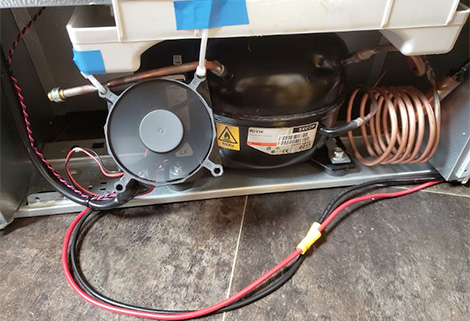 Armed with a GCSE in physics, I was ill equipped to conduct forensics on our dead fridge. But when the new one arrived it had no plug! So I bought crimping tool and set to work.

Since then, I have added a computer fan to circulate air behind it and increase its efficiency and am contemplating some other wiring at the stern, so death by electrocution is a distinct possibility for the future!

The closest we have come to explosion was when I filled the expansion tank on the central heating with antifreeze purchased from the local garage. Thankfully the 1litre bottle only just took it above the red line as I later discovered that this was a MAX line, not a MIN, with the result being a potential fountain of antifreeze in my airing cupboard through the pressure release pin holes in the lid.

Others, however, have not been so fortunate and I have heard horrendous stories of hot water boilers exploding or of diesel fuel sprayed around the engine rooms. Similarly, whilst our stove problems revolved around a refusal to stay lit, I have heard stories of chimney fires and glowing fireboxes; blocks of wet wipe are not a safe fuel!

Every so often along the canal you see a boat that is full of water. Mostly, this appears to be the result of long-term neglect, with absent owners, but occasionally it is due to a leak. Bow thruster tubes can be a problem in this way. We have been warned about the step that is welded into the stern of Lutra Lutra. Very handy if you happen to fall in, but a weak spot for rust the rest of the time. So blacking is a regular diary appointment and the bilge pump gets regular use.

On the subject of falling in, you might think that canals are shallow and safe, but it can be surprisingly difficult to get out if you are wearing sodden clothing and Wellington boots. We recently fished a man out of the cut on his way back from the pub. He wasn't wearing wellies, but had suffered a head injury on the way down. Alcohol and water can be a lethal combination (other than in a whisky glass). My homemade elderflower champagne is proving to be quite lethal on its own!

Dangers lurk beneath the surface. We have been exploring the Birmingham Canal Network (BCN) and can tell you how many shopping trolleys there are underneath the water. And then there's always the danger of catching Weil's Disease - it's rarely fatal, but you might die of horror when you realise that its source is rat urine! 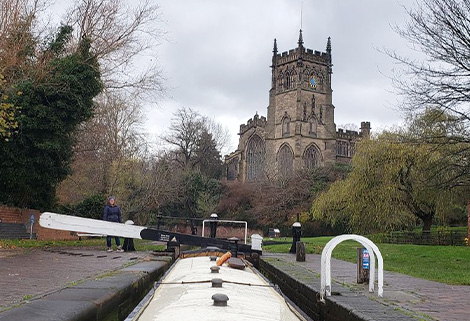 Finally, if you really want to go out in style then hang out round the locks. We undertook a day's lock training recently. It should have been entitled 101 ways to die at a lock. We are super-careful around locks, but a friend was nearly sunk by helpful hire-boaters on the Oxford canal. From catching fenders to getting caught up on the sill, you need to keep your wits about you. And, should you happen to fall in at a lock, just remember that the human body is not buoyant in turbulent water. It might just be the last thought that you have.

Which brings my catalogue of catastrophe to a close. I hope that you have enjoyed hearing of our mishaps and calamities. If you have any to add, feel free to get in touch; schadenfreude is most certainly alive and kicking on the cut.