So - imagine the scenario. You’ve been enjoying your holibobs in the Lake District, far away from old bridge number 38 and you get a message on your phone from something called, ‘The Pirate Boat.’

Well I don’t know about you, but I was intrigued.

I looked it up on a map. It’s a bloody long way to go if you ask me. There are images in my head of Koala Bears and Kangaroos. I wonder whether to Google if it is necessary to obtain a visa to visit our antipodean cousins.

And then I notice the address. It’s here! In good Old Blighty. It’s oop North. Well down sarf actually, due to the geography of our holiday location it turns out that I’m further up the country than the aforementioned mall is at the moment. I resign myself to traveling by Land Rover rather than Quantas and enter the postcode into my sat- nav as we head back home. I put it into the ‘via’ option expecting that annoying voice to say something like, ‘Don’t turn right in 300 yards - thar be dragons.’ But it doesn’t, probably because I muted the volume.

And the reason for these seemingly obscure instructions? I’m paying a visit to ‘The Pirate Boat,’ a narrowboat captained by Heidi Manning and she’s moored up on the cut alongside the shopping centre known as Botany Bay.

So we drive around that maze of motorways that encircle Manchester following what I am sure is the most tortuous long-winded route that GPS can devise, until we spot a ribbon of water that must be the Leeds and Liverpool canal just off junction 8 of the M61. And there, down a private road we come to what is the five storey shopping complex housed in a former mill. It’s believed that the name originated during the building of the canal. Due to the navvies of the time occupying the site the locals considered it a place to be avoided – much like its more famous upside down namesake.

There’s a car boot sale on the car park - oh joy! My wife, Kate, a veteran of many a market and charity shop encounter is, to my mind, overly excited. Fortunately for me and the two dogs the bazaar is just about to close for the day (the best thing I find with car boots is that they don’t last very long! Most of the entrepreneurs plan on being in the nearest pub as soon as it opens) ‘Oh dear!’ I sympathize whilst sniggering into my sleeve, ‘Never mind.’

And in truth she doesn’t. Mind that is. After all we’ve just arrived at a shopaholics paradise. Manfully I make the best of it. ‘I’ll look after the dogs,’ I tell her, ‘here in this outside cafe on the ground floor.’ Well the weathers nice and there’s a smell of coffee in the air. There’s also the possibility of a sticky bun, so it would be a shame not to.

She’s extremely pleased not to have me tagging along in all honesty, something to do with cramping her style. ‘Just one thing before I go,’ she smiles sweetly, ‘Have you got any money?’ I resist the opportunity to reply, ‘Yes, just enough for my coffee,’ (I probably wouldn’t have mentioned the sticky bun at this stage, one has to have some guilty pleasures after all) and I cross her palm with silver. As she disappeared into this temple to consumerism I swear she had a spring in her step and a song on her lips. Bless!

And so I settled down to an Americano and a Belgian bun (I’m very international in my tastes) with the theme to Captain Pugwash - yes, I am that old - playing on an endless loop around my head. Until, shiver me timbers, slap me barnacles and hoist the mainsail, who’s this approaching? 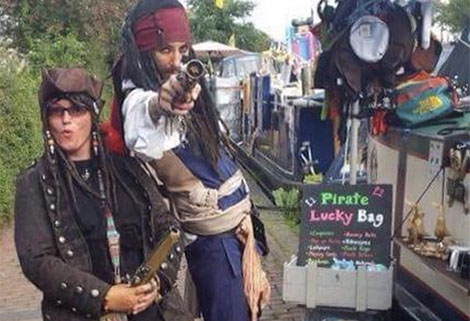 Yes, it’s Heidi herself. She seems very nice, but in truth I’m a bit disappointed.

Did I hear you ask why?

Well, let me tell you. Having built myself up to expect a female Jack Sparrow and without wishing harm to the poor girl I was expecting someone with at least a wooden leg, a hook poking out of her sleeve where her hand should be and the option of either a parrot on the shoulder, a tricorn hat, or any combination of all of the above.

She wasn’t even rolling her ‘arrrrrrrrs’ for heaven’s sake!

But, in the finest tradition of investigative journalism, fake news and with your interests in mind dear reader, I settled down to interview her anyway.

It turns out that she has been patrolling the canal system like some latter day buccaneer for a few years now, setting out her stall of goodies at all manner of events.

If you should turn up at a festival she’s attending then she will quite gladly relieve you of your small change.

No, this isn’t piracy madam, despite the sinister name of her vessel. This is commerce. From the canal side you can purchase all manner of piratical themed goods.

And about here I must confess a small measure of self-interest. You see my first children’s book DOGNAPPED! about my dog Misty and her crazy friends is set on the canal. They accidentally board a narrowboat and set it adrift. The only other occupant is the boat’s puppy, Ashley who believes that he has been ‘Dognapped,’ by some nasty pirates. Will she agree try to sell some for me? Thankfully Heidi says yes, so we move on to the next important question, ‘Can I see the boat please?’

It turns out that I can, and so we set out. Heidi strode confidentially through the coffee shop and out onto the car park where the last of the ‘booters’ are packing up. I follow, cautiously. Well you never know, do you? There could be all manner of unfriendly militia, zombie pirates (I’ve seen ‘The Fog’ you know) and ticking crocodiles waiting to ambush us. Kindly, Heidi makes no mention of the fact that I’m bent double and casting furtive glances around me like a demented Merecat as we reach the canal side. 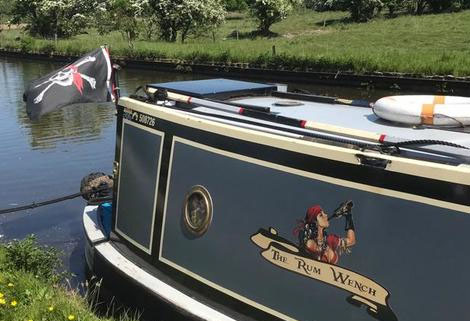 And at last here it is, looming menacingly through the mist (yes, I know it’s bright sunshine, but I’m trying to create a mood here!) The Pirate Boat!

It’s actually called, ‘The Rum Wench,’ a nice play on words and very Black Country, if you don’t mind me saying, Heidi.

From the poop deck - sorry, from the stern, flies a skull and cross bones. A roundel at the bow bears a similar emblem and ominously just above this insignia is a small cannon. 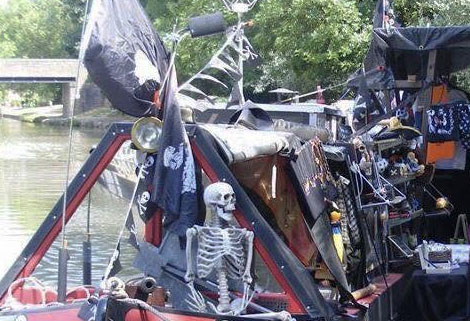 I was relieved to find no sign of any planks to be walked, but apparently when The Pirate Boat comes alongside to set up shop a skeleton may be straddling the bow on the lookout for landlubbers to press gang into spending their doubloons and pieces of eight.

Along the gunwale is a sign - ‘STOP HERE - FOR ALL YOUR PIRATE BOOTY.’ It then goes on to further describe what that booty might be, ‘Hats, Flags, Bandannas, Swords and Sailor Outfits.’ There are skull shaped goblets, skull and crossbones signs with a variety of warnings, skull shaped… well, you get the picture! 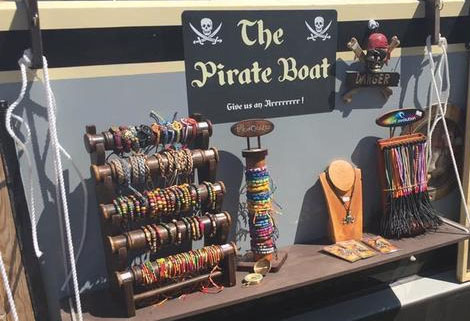 There are badges too. Small, medium or large with a wide variety of slogans (not all pirate related). You can even send in your own designs to badges on board and get badges, key rings, fridge magnets, bottle openers, et al.

Look out for Heidi along the canal side and at the upcoming events below and pop along to say hi and buy a cutlass, a bangle or even an ice cream, tea or coffee. You’ll know her instantly – she’ll be dressed as a pirate.

And don’t forget to roll your arrrrrrrr’s, otherwise you may get keel-hauled. Oh, buy a copy of DOGNAPPED! too, your kids will love you for it.

As I finish this article for the August edition of ‘Canals Online Magazine,’ I realise that I must return to Botany Bay. Not from any sense of nostalgia you understand. It’s just that I interviewed Heidi a few months back and it’s probably time to pick Kate up. She must have finished shopping by now, surely!?