Roving Traders — canal boat owners licensed to sell goods and services on UK canals — have to be mad.  Consider the challenge of living sideways in an improbably elongate tube.  Now consider shoehorning a business in there with you.  And if you somehow defeat the odds, and are hard working and fortunate enough that your product finds an audience ... your continuous cruising license requires that every two weeks you leave your customers behind.

For a business reliant on good weather (in a country famous for not having it) there are yet more obstacles: like the law, and a licensing organisation who should, but rarely does, protect you. 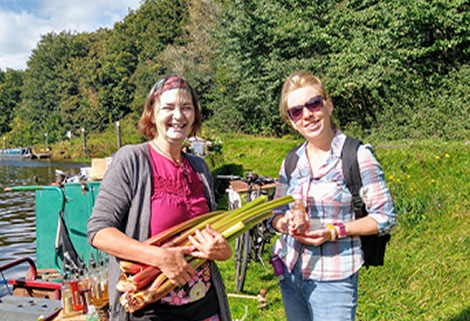 Consider Sam Keay, owner of Gangplank Spirits, whose loyal customers chase her around the countryside, bringing wild-gathered fruits in season to swap and flavour her gins and cordials. For years Sam says she was welcome wherever she went. With the pandemic and challenging times, however, she finds herself increasingly confronting licensing officials — five times this year — demanding she have a local street traders license, obliging her to cease doing business and move on down the Cut.

It’s unpleasantly reminiscent of how authorities have traditionally responded to people on the edge of town whose lifestyle threatens their own.  It also appears to be in contravention of law.  The Pedlars Act of 1881 decreed that one authority’s permission to trade be respected nationwide.  Reciprocity — it was understood — is necessary to  preserve the peddling tradition, a profession as old as almost any, and iconic in British history.

Which explained Sam’s anger when both the Canal and River Trust, who issued her the license, and the Roving Canal Traders Association of which she is a member, declined to rise to her defence.

A CRT official obliquely threatened they could simply do away with the Roving Traders license should her demands persist. The Roving Canal Traders Association, which purports to represent her, declined to enter the fray, afraid that complaining would only make the situation worse.

Nevil Ingram, a Small Business Advisor at City of Bristol College, however, was spoiling for a fight.  A Roving Trader himself (his business is “The Big Cheese”), Neil helped launch a successful “Justice for Roving Traders” Crowdfunder campaign.  With £2000 they paid an attorney to craft a legal opinion for roving traders to present next time they are challenged by local licensing officials.

But legal arguments don’t help roving traders crack the London market where the sheer popularity of canal boats is precisely what excludes them.  With upwards of 3,000 boats in London — and seemingly all of them wanting to moor on the 10-mile stretch between Little Venice and Hackney — a roving trader doesn’t stand a chance.  Few even try. 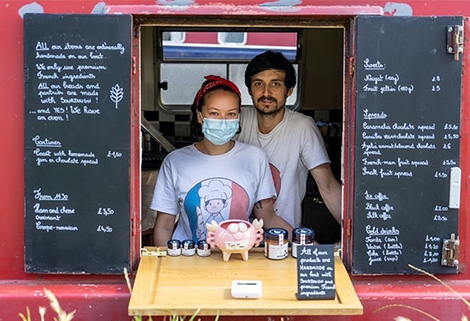 Lindsey and Jeremy Morel, owners of the Floating Boulangerie, are the exception that proves the rule.  Based in Kings Cross during lockdown, customers queued for two hours to buy their bread.  Their calendar was crammed with £20 breakfast reservations.  They were the picture of a successful enterprise, with  thousands of followers on Instagram and testimonials from people who’d cycle 30 km to buy a croissant.  Film students made videos about them.  But lockdown ended and CRT demanded they relocate far from Central London.

A month later I found them on Acton Road, dejected, miles from the adoring customers who only months before had them investigating rental of a kitchen to meet excess demand.

Jeremy was throwing away stale croissants.  “It’s just too much” Lindsay explained.  “Between Brexit increasing the cost of our supplies, and CRT putting us on a restricted license, we’re going back to France.”

Indeed, their boat and business are now for sale.  But who is mad enough to buy it?  If a trained chef and baker with savvy businesswoman wife, a sensational product and thousands of customers can’t succeed on London’s most popular canals, who can?

A whole bunch of them perhaps, organized as a perpetual floating market, planned sufficiently in advance for the Canal and River Trust to reserve them moorings across London. 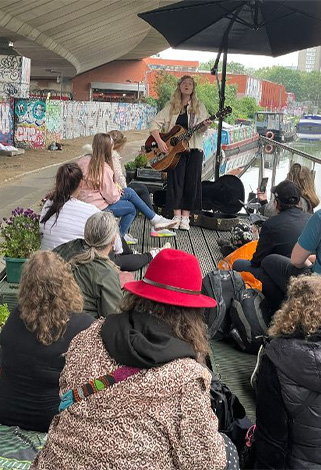 That’s the essence of Brigadoon!, which launches this week. Inspired by the mythical Scottish Highland village which magically appears every 100 years, this Brigadoon — with music, theatre, workshops and roving traders — will appear every two weeks along the canal.

From October 22 until November 4, a small flotilla of roving traders will pitch up under the Westway overpass in Ladbroke Grove.  A boat with stage for performance, a Dutch barge whose captain leads historical walking tours, a seafood boat and a pizza boat, along with vendors from Portobello Road selling merchandise in time for Christmas, are the core around which this market is organized.

Organizers’ ambitions are more than commercial, however. By creating a locus of activity in a historically problematic location they focus attention on its unexploited potential.  The Westway overpass — whose construction famously obliterated much of the North Kensington neighbourhood it transects — protects almost 100m of canal from the rain.   It is the one weather-proof canalside location in London that can host outdoor events, something post-Covid London needs now more than ever, and which a neighbourhood with the storied musical history of North Kensington can exploit more than most.

Before the market relocates closer to Paddington Station for its next two-week manifestation, interested parties will convene to create a Friends group to take ownership of the site, plan its future, and start organizing future events — with and without boats — that reflect the needs and resources of the community who will own events there going forward.

Sounds mad, but perhaps the only thing mad about it is that no one’s ever done it before.

Your Canal Boat CIC, the official organizers of Brigadoon, are working with the Canal and River Trust to plan a year’s worth of stops across London.  Discussions allow for the growth of the market to include as many as 20 boats.  Roving traders who want to be involved are invited to contact Your Canal Boat CIC Director ericellman@gmail.com.