the rose of hungerford 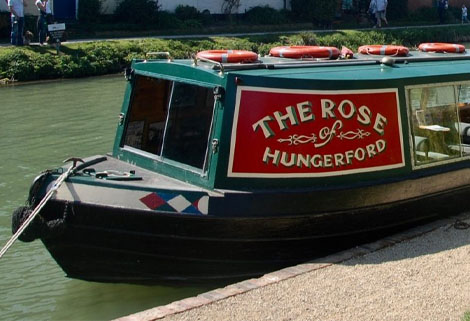 The Rose of Hungerford is a traditional canal boat offering public trips and private charters, owned by the Kennet and Avon Canal Trust and run and maintained by fully-trained volunteer members of the Hungerford branch.

It was built by Peter Nicholls at Napton, Warwickshire, was launched at Great Bedwyn in 1982 and commissioned at Hungerford Wharf in 1983, now its home mooring.

The boat was named for John O’Gaunt, 1st Duke of Lancaster, third of the five sons of King Edward III who reached adulthood, who gave the Commoners of Hungerford fishing rights on the River Kennet (now strictly controlled). These rights were granted in addition to the grazing and hunting rights already received. 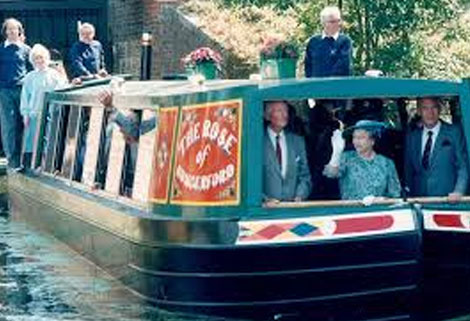 The current Duke of Lancaster is Her Majesty the Queen. She travelled on The Rose when officially opening the restored Kennet and Avon Canal at Caen Hill, Devizes, on 8th August, 1990, 30 years ago. In 2013, The Kennet and Avon Canal Trust was honoured by Her Majesty, who awarded the Queen’s Award for Voluntary Service, the MBE for voluntary groups. In 2014, The Princess Royal visited the Trust’s Headquarters in Devizes to present the Award.

During lockdown, the Rose has been treated to six new door panels, for the side and engine doors, beautifully painted with traditional roses by Bradford-on-Avon based signwriter, Ginny Barlow.

Further details of the crew and trips provided will be given in my next article for CanalsOnline magazine.

Iris Lloyd, Waterways chaplain (with thanks to Sarah Warburton, who provided the details given above and also took the photographs, except for the one of the Queen)