life with a composting toilet

life with a composting toilet

We are Nick and Fiona, and since Autumn 2017 we have lived full time on our 63ft narrowboat Meand’er with the plan of enjoying the waterways over the coming years.

Our voyage into the world of composting toilets began during lockdown! We had been on a couple of long trips on our narrowboat and experienced huge issues with broken elsan points and the frustrations of trying to find somewhere to empty our cassettes.

We had talked about composting toilets before but truly began investigating further during lockdown - I think my husband wanted to keep me amused!

We soon discovered that there were a variety of different styles of composting toilet and we needed to narrow down the right one for us on our narrowboat. We would be using the same space as the cassette toilet did so it had to fit!. Another factor was capacity of the toilet as although we were currently going nowhere, the future plan once retirement happened was to explore the waterways - hopefully not having to worry about elsan points!

We read many reviews and joined groups on social media to find out more, and there seemed to be a big difference of opinion on which toilet to purchase. Price was obviously a major consideration for some people and this could vary from making your own DIY toilet up to spending £1000. Now this may seem slightly excessive but as hubby pointed out, it was going to be in regular use and hopefully the only one we ever bought!

After much investigation we knew we needed a toilet with both a large liquid capacity as well as a large solid capacity. The final question was did we need a fan or not? The purpose of the fan is to remove all odours from the solids container. It sounded like a great idea and as we had a 12v volt feed to our cassette toilet, we would be able to utilise it.

We chose an Airhead toilet for its design, capacity, mechanical stirring system and ease of use when emptying. The only part likely to need replacing in the future would be the fan and they were easy to pick up. Installing the Airhead was fairly painless as we had plenty of space and we were able to route the hose for venting through a hole in the cupboard behind the toilet and up through the roof of the boat where there was an existing hole which had been capped.

Nick made a wooden plate, shaped to the roof, to attach the fan housing onto and after uncapping the hole we fixed a new mushroom vent to the roof. 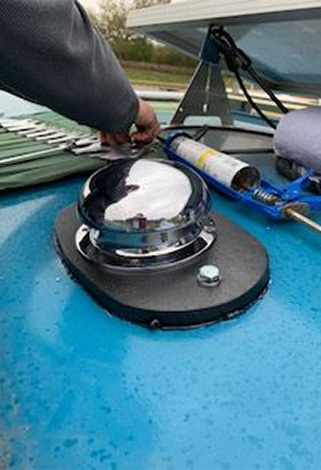 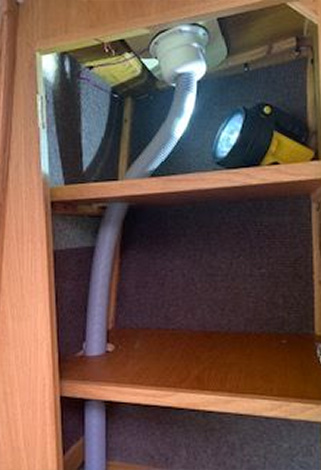 The fitting of the actual toilet was probably the easiest part of the whole process!

We have always used Coco Coir in our solids container which we purchase in brick form, packs of 6 from Amazon. There has been a fair amount of experimenting with these bricks as to how much/how little water to use for reconstitution. We now keep the brick dry and break by hand with the aid of a large screwdriver!

To start off with we only used one brick but we have now found over the months that one and a quarter bricks is what works best for us - we are both vegetarian which means our poop is likely to have a higher water content. The solids container is changed every 3-4 weeks and that is with both of us using it full time. 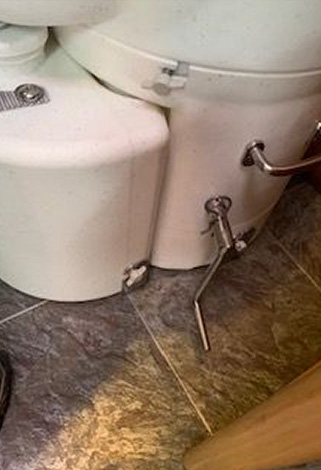 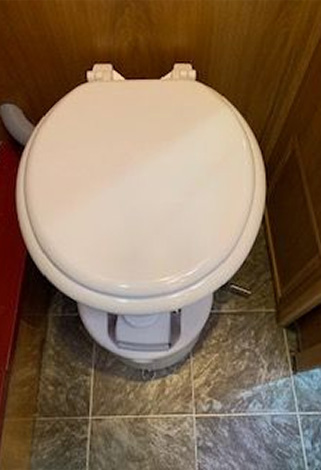 So where do we empty the solid’s container I can hear you asking!? Well we are fortunate to currently be resident in a very forward-thinking marina and they agreed to install composting bins! There are 4 in total with each one being used for 3 months and then left to compost for 12 months before emptying. There is currently another couple using the bins and we know a number of other boaters are thinking of changing to a composting toilet. As ours is a private marina these bins will only ever be available to marina moorers. For when we are cruising we have 3 plastic boxes with lids, specifically made for solid waste, for emptying into which sit neatly under the floor in the bow and no they do not smell at all! (For those who don’t know, it is the urine mixed with the solids that causes the odours!)

When we first started using the toilet we could often be observed sniffing our outside vent to see if there was any smell but I can happily report it is just an earthy smell if anything at all. Having the extra boxes will allow us to be cruising for approximately 16 weeks at a time without needing to return to base and empty into the composting bins.

Our liquids container has a sight glass at the front so you know when it is full, but as many Airhead owners will tell you it takes a few months to get into the habit of not only checking the sight glass but also listening to the sound as you urinate! You definitely know it is full when you suddenly get wet feet as it has overflowed - we have purchased extra bottles so actually have three!

We use Ecover toilet cleaner to clean the toilet bowl and have put it into a spray container. We also put a couple of squirts in each bottle before use as this helps keep the bottles spotless and also stops there being any urine smell.The urine bottle is emptied in the Elsan but can also be emptied in an ordinary toilet or under a hedgerow/under a tree when out - as long as it is not near a water source.

Are we pleased with our toilet? Yes and we wouldn’t change it for anything else! It gives us so much more freedom when we are cruising and takes the headache away of planning where we can empty.

For access to more in-depth blogs from Fiona and Nick, and for more information on various types of Composting Toilets, visit the Practically Green website