Martin and Emma, along with their dog Ernie are liveaboard boaters, folk musicians and continuous cruisers. They began their canal adventures on NB Jambo in 2017, only moving onto NB Digalou after the Covid Lockdown of 2020. Martin invites you to join him aboard as the trio continue their adventures.

Where to start… well I was born in… too far back… ok then! The shorter version is that after living in a house a stones throw from the Gloucester Sharpness Canal for fourteen years, my wife Emma and I - who are both musicians - were given a chance to change our lives and so we bought a narrowboat and left the land behind to live on the water.

We’d been on a narrowboat only once before when we’d hired from the (now closed down) boat hire in Dunhampsted, Worcestershire, but that was it. We devoured every boating YouTube video we could find and were still completely clueless… and sometimes three years later we still are! 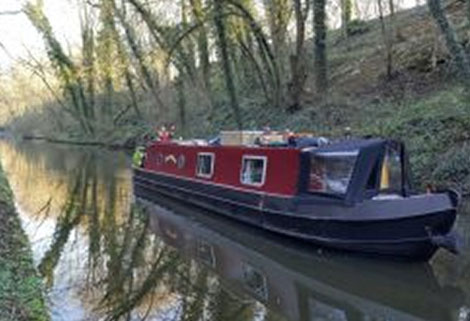 We’d fallen in love with, and purchased, a boat that we had found advertised online which was moored on the River Lea over the other side of the country from where we were living. Getting it back to Gloucester was a massive struggle involving boat movers, a broken down engine and finally a lorry which craned her back into the water at R.W. Davis’ in Saul (about 8 miles south of Gloucester). It was stressful, expensive and utter chaos - so therefore a good introduction to boating.

In July 2018 we emptied a three bedroom house, giving away about 90% of our possessions and filling the attics of various friends and family members with a small library of books, music, and instruments and moved onto Jambo - a 39ft narrowboat made by East West Marine in 2006.

At this point I was still commuting to work, every day becoming harder to drag myself away from the canal to sit in a windowless office for 8 hours in front of a computer (I work in IT). One day, having finally snapped, I decided that I wasn’t going to any more! I went into work and handed in my notice with the idea of finding another job where I could work remotely, but the managing director had different ideas and so on January 1st I found myself unexpectedly working for the same company I had for the last 14 years but from our boat - a dream come true!

The Gloucester Sharpness canal is one that I’ll write about later but it is not normal (in the nicest possible way) when compared to a lot of the canal network in the UK. It is very wide, fairly short and massively forgiving for new boaters getting to grips with navigating for the first time, but we yearned to explore so on the second week of January, much to the shock and worry of our friends, we left Gloucester lock and travelled north along the mighty River Severn. We arrived safely at Stourport on Severn and started our journey through the narrow canals, learning as we went, often getting it wrong and being saved by good grace and the amazing people we met along the way. 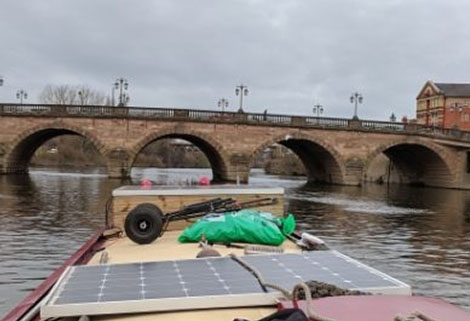 the River Severn at Worcester 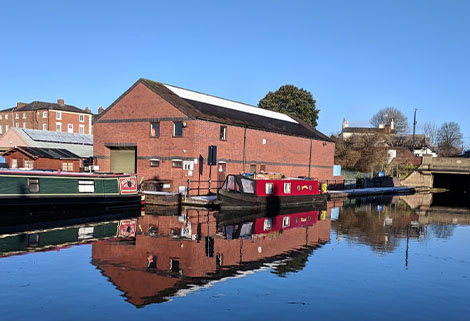 Winding our way northwards we traversed through the early months’ snow and ice past seemingly magical places such as Greensforge and quiet canal homesteads like Kinver stopping only to work for a few days before taking to the tiller and pushing on. At Wightwick our engine went awry as our gearbox disintegrated leaving us to limp into Wolverhampton and then to the middle of nowhere on the Shropshire Union Canal where it finally expired leaving us stranded for three weeks whilst River Canal Rescue desperately tried to find the right parts. 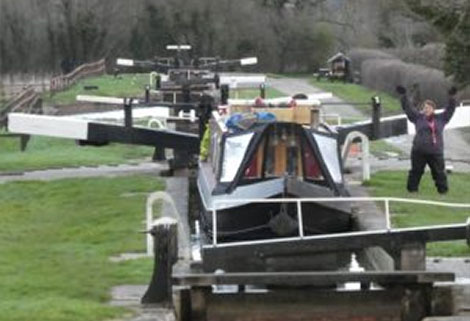 Emma getting us through Hurleston lock flight

Carrying on up the Shroppie I fell off of lock eleven of the Audlem flight, broke a finger and whacked my head leading to a trip to hospital, which meant that as we turned west onto the Llangollen Canal’s Hurleston lock flight I was having to wind the lock paddles left handed as all four seasons of weather battered us.

We also found at that point that our lovely Jambo didn’t like the Llangollen. She was “raw water cooled” meaning that the engine was cooled by drawing water out of the canal, through the engine before it was ejected on the port side. In the low waters of the Llangollen canal Jambo rebelled, became stubborn and stopped whenever the cooling system became blocked, all the way up to the little town of Llangollen itself where we had to turn around and go all the way back the way we had come to reach the Shroppie once more. 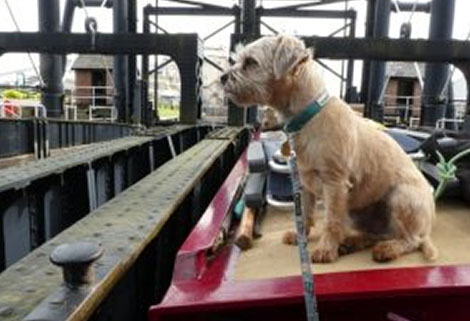 Ernie taking in the sights on the Anderton Boat Lift

Once more on the Shroppie, we continued north and eventually reached Chester, the massive city walls towering over us. For the first time in a while we took a break before heading to Ellesmere Port so that we could say that we’d navigated the length of the canal. The weather by now was a lot better and we spent a lazy day or two on the Middlewich canal which connects the Shroppie and Trent & Mersey (T&M) watching the trains whiz over the adjacent bridge before turning left onto the T&M and meandering north (with a detour down the Anderton Boat Lift and along the River Weaver to Northwich before returning vertically up to the canal) eventually reaching Preston Brook tunnel and leaving C&RT waters for the Bridgewater Canal. Entering the city of Manchester was daunting (we half expected to see “here be dragons” on the map) but it was a wonderful experience giving us free accommodation in one of England’s largest cities whilst feeling completely safe in the unique Castlefield basin. 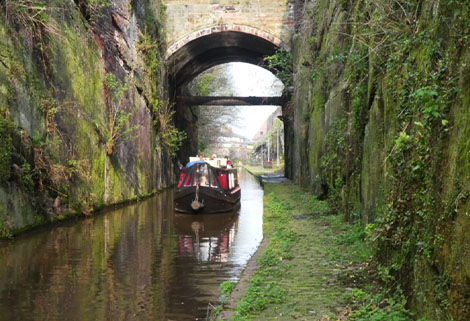 Beneath the walls of Chester City

Our plan from the start of our journey was to reach Sheffield in the north of England but when we eventually reached Wigan, which would have started us onto the Leeds & Liverpool canal, we were unexpectedly turned back by the lock keepers. There just wasn’t enough water in the canal due to damage further up and so rejected we turned south again and followed the same journey back south, past Middlewich on the T&M and up “Heartbreak Hill” (or the Cheshire Locks) before turning up onto the Macclesfield Canal. This waterway turned out to be an absolute delight and one of our favourites but having reached the end we were warned of yet more water shortages on the Huddersfield Narrow Canal which again blocked our way north. We sulked into the incredible Bugsworth Basin before slinking down the Mac again. 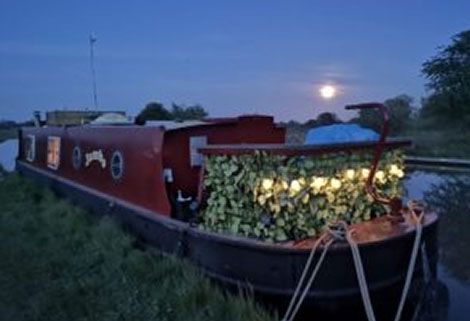 the Middlewich Canal by moonlight

From there we ducked our way through the very low Harecastle Tunnel and journeyed on through the potteries finally reaching the end of the Trent & Mersey and entering the broad expanse of the River Trent for a very short while before heading south down the River Soar. Having to go away for a few weeks to appear at gigs in Devon, Holland and Gelsenkirchen, Germany (yup - it’s a strange life) we moored Jambo up at Ratcliffe On Soar and so luckily missed a flood which hit the area making the river un-navigable. When we returned to Jambo (who was fortunately safe and sound on a floating pontoon) we carried on towards Loughborough (which seemed like a very quiet place as the students weren’t around) and zipped through Leicester with it’s knackered locks before racing up the Foxton lock flight eventually reaching Braunston on the Grand Union Canal where Emma drifted us into the only free mooring space with about 1 centimetre free either end. 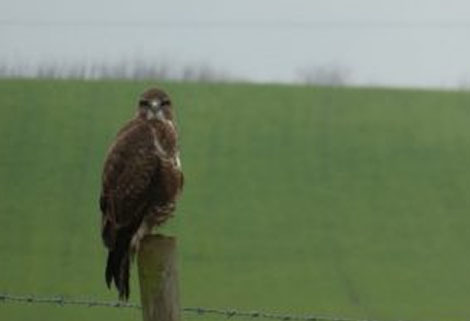 Watching me watching you

The cruising year was coming to an end and it wouldn’t be too long before the annual engineering works started to kick in so we hurried (at 3mph) along the central branch of the Oxford Canal to re-join the Grand Union at Wigram’s Turn before turning off through the Lapworth Link. Trailing north we bounced through the Lapworth locks before finally turning onto the Worcester and Birmingham canal. Here we hit the Tardebigge flight of 30 locks that took a day to recover from as we had to rope Jambo out of every lock (the bubbles at the bottom of each lock caused by the overflow caused problems with the raw water cooling system!).

At Worcester we pulled in at our favourite cake stop (Commandery Café attached to the civil war museum on the outskirts of the town centre) and waited for the water level of the River Severn to drop as it was in flood. Four weeks later we were still there (and about half a stone heavier - it is exceptional cake!) until the waters of the river finally subsided and we could travel through fog and fast waters to return to the Gloucester Sharpness Canal for the winter. 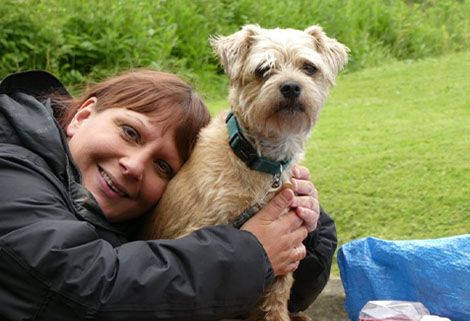 Emma and Ernie the dog...

We believed we only had a year out to roam the canal network but once we’d had a taste of what life could be like as nomads there was no way I was going back into an office. We settled in for winter, moving less frequently, walking Ernie around more familiar terrain and then, with three days before we were planning to head back up the river, lockdown hit and life changed for everyone….