the story from the very beginning... 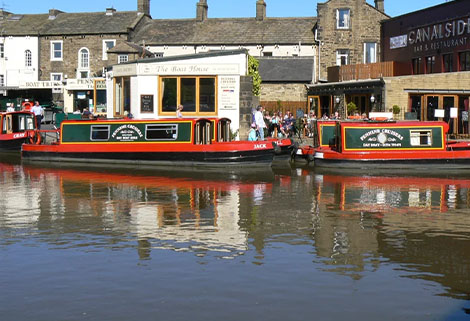 Through odd canal holidays, trips on the rivers and being fortunate enough to have friends on the canals as a child, I eventually caught up with our fantastic inland waterways and the lovely people that live, work and holiday on them. We found a fantastic company to hire from, Pennine Cruisers. A Skipton based company on that lovely Leeds and Liverpool canal. This company soon became the key to the start of Yorkshire Bespoke Tiller Pins. As the article goes on you will see why. All staff and owners, over many trips with them, soon became what me and my wife class as our Skipton family.

I had decided to make one of the staff there (and now good friend) Wayne a gift. At this stage I really didn’t know what. He had just finished off his boat that he had recently moved onto, having built it from a bare shell. Back home I was in my workshop wondering what I could make him. I knew it would be for his boat. 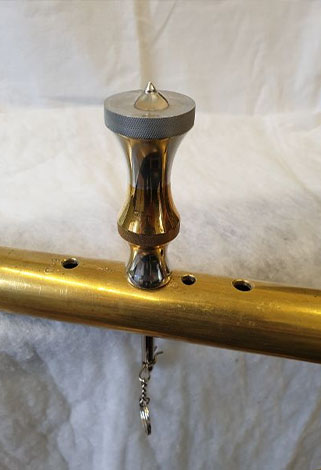 On rummaging around, I found an old piece of round brass stock, along with a solid piece of aluminium from my workshop stock. Straight away I knew I was going to make him a tiller pin. The two pieces of material had caught my eye, even though they were both very dull. I thought that if I could use the two pieces together, the result would be quite unique. I began looking at new ways on how to work and join the two pieces together. I also knew when they were machined, they had to give a flawless impression as though they were all from one piece. I eventually found a way to do this and set about making the blank into an attractive eye-catching shape. This just seemed to flow and sooner rather than later, the tiller pin was made. I was unsure if I was on the right track with it all, so for a bit of confirmation I sent a picture of it to ‘Our Zoe’ at Pennine Cruisers to ask her opinion. I was expecting some changes may be needed, but all I got from Zoe was ‘Wayne is going to love that!’ It was buffed, polished and ready for our trip up to Skipton for our next of now many boat trips.

We got up to Skipton for our week’s break, and as we were unloading, I presented Wayne with his gift. He was delighted and said, with a smile on his face, he had never seen anything like it. Job done; off we went for our week’s cruise. My wife Jayne stated as we were cruising out of Skipton towards Gargrave ‘I got the impression he was over the moon with that!’. I agreed.

Halfway through the week we had winded round and got back to Skipton as planned to spend the night around the town catching up with our Skipton ‘family’. Of course, this meant a night with Phil before heading towards Bingley in the morning to achieve a bit of east and west. As I went into various pubs on our evening out, it seemed like the whole town knew I had made Wayne's tiller pin. I was introduced as ‘that’s that fellow who made that tiller pin’, all with lovely comments and positive feedback. I was chuffed but didn’t think anything of it. It wasn’t till Jayne and I were back in the Boat House that I realised people were being very serious and even suggesting I should continue to make them.

THE NEXT TRIP UP 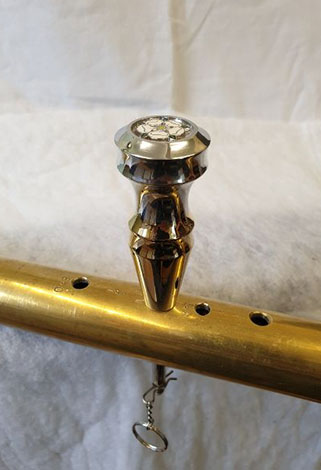 By our next visit 6 weeks later, now October 2019, I had come up with 4 new designs all combining brass and aluminium. However, one of these was clearly turning heads: Tiller Pin Zoe (all my pins are named after the staff at Pennine Cruisers). Tiller pin Zoe was a little different, because I had incorporated a recess in the top to house an enamel Yorkshire rose.

I had taken a total of 16 tiller pins up - 8 given for the shop, and 8 to go on a craft boat which goes around the network (a good friend of Wayne’s).

The positive feedback and interest were increasing, and all seemed to be going well. We soon arrived back at home; it was clear that I may be busy out of work hours.

THE BOMB SHELL AND THE PLUNGE!!

In the middle of November I had the unfortunate, very poorly timed news, that after 11½ years I was to be made redundant from my place of work. To be honest it was no shock: I was the last of four employees to go. The firm had hit problems and that was that chapter over.

I was now out of work with time on my hands and a new venture that was not yet established, still in its infancy, but with an interest growing. The product was there - just not known. I now started to use my redundancy to pay myself a basic wage to cover my bills. I soon started altering the workshop to accommodate much needed machinery tooling and workspace. This took around a month, and while my tidy lovely workshop of many years was in bits, I couldn’t work in it. However, it was eventually completed and workable – but without work. 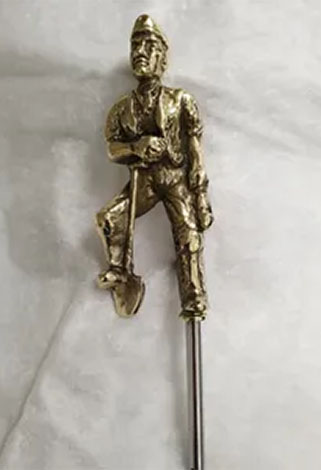 I started getting odd jobs - repairs, lathe work brazing and odd bits. Then people started sending me brass items that they wanted me to turn into tiller pins. Many were hollow and could not accommodate a good thread for the actual pin itself. So, I would machine a solid brass boss, then tig braze that to the hollow cast body. This was becoming a popular request, and other work started to flow in. Praise for my work was building and it was common for customers to say they were told that what I managed to do couldn’t be done. I suppose wrong advise from wrong person scenario.

One afternoon my oldest son and I were having a drink in the workshop after a day of help from him altering the workshop again. I got a very lovely comment (beer may have been kicking in) he said, ‘you are a very clever very multi skilled talented man, but you are not known enough, and word of mouth is going to be very slow’. He suggested that I speak to my daughter in law Sammie and ask for help in getting myself known, joking that I am useless with computers and social media. The next day I took my son’s advice and asked Sammie if she would be interested in helping me out. Sammie was over the moon I had asked her. 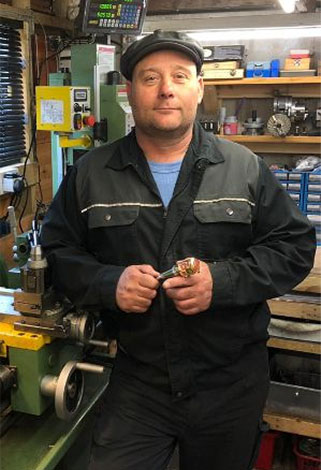 The rate and pace to me was exhausting. Sammie was relentless. Left no stone unturned. Within three days Yorkshire bespoke tiller pins had a running Facebook account. Had a web site not only built, but up and running. Had a PayPal account set up etc. Groups were getting in touch from our posts asking us to join. I had picked up my first big order thanks to Finesse boats who were very helpful and encouraging. This led to me finding a Sheffield based enamel logo and badge place. Which led to a local material suppliers Avus Metals. The snowball effect was starting to happen. New customers from the website and from Facebook were steadily on the up. Comments and positive feedback were a massive incentive for me to carry on. What really hit home was just how willing the much bigger companies, boat builders, marinas online canal merchants were to get behind the little firms. It really felt like big brothers were keeping a look out. 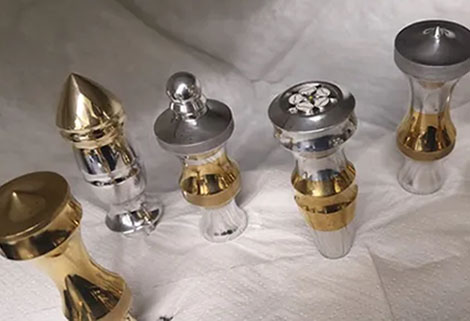 It is very early days. I have a range of tiller pin bodies now and there will be more designs in the future. All named after Pennine Cruisers staff. There are now many other material options available and body material combinations. I am passionate about brass ware and love to repair figures that are broken – it gives them a second chance with a fantastic view from the tiller for their retirement. I find it very warming to know I have turned a personal object into a lovely tiller pin for someone. I now incorporate and work with more enamel options in my own tiller pin range along with boat name plates. I’m also venturing into other things for my growing customers, the cards are still on the table, but I believe they will be something to consider on your boat.

IT IS VERY IMPORTANT TO ME AND I INSIST NONE OF MY TILLER PIN RANGE WILL BE SOLD TO ANYONE FROM STOCK. EACH ONE IS HANDMADE FROM START TO FINISH PERSONALLY FOR THAT CUSTOMER!! 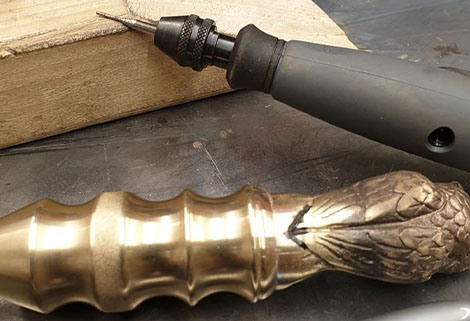 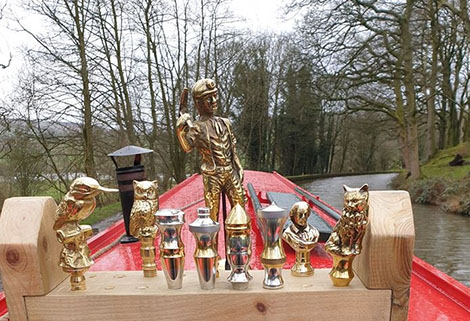 As for many this has just wiped out the order books. I have not been idle – I have spent time making special tools to assist me in my work. I took delivery of a lathe which is much larger than my original one. Now I am able to work the two in different rolls, which will be helpful.

This was in the pipeline when things were advancing forward. It has pretty much broken me financially, and I feel the timing couldn’t have been more wrong. To help keep things going I am currently working early morning starts in a supermarket, picking online orders. I am hoping to do this as well as my tiller pins. It is do-able. I believe hard work pays.

TAKE CARE ALL AND BE SAFE IN THESE TIMES. 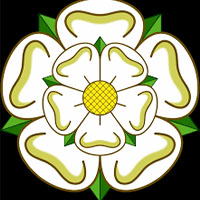 Stephen Johnson is the owner and creator of Yorkshire Bespoke Tiller Pins. 'We are a new small family business, created in Skipton.  Our Handcrafted tiller pins are made to suit you, different designs are available. Reliable, friendly service. Please send us a message if you have any enquiries. We are willing to help with any further questions. Thank you.'