the voyage of friendship – a new year

Home » Miscellaneous » the voyage of friendship – a new year

Hello again friends and Happy new year to all.

I'm back on board Therapy following a quiet Christmas and a brilliant New Year holiday with all our children and grandchildren.

The boat survived being locked and moored up at Abingdon for a week or so and a driech Saturday morning saw me re-stocking and checking before taking off again for her last couple of days on the Thames. Am I sensible, out in the cold getting soaked? I wasn't 100% sure as I waved to Ewan and cast off again.

My companions for this leg were to be Lynn and Chris from Lambourn but both had been poorly and couldn't make it. I hope you're both better soon and will join me further on. However my son Stephen, here for the holidays with his wife and baby, had just had his own plans cancelled and was serendipitously available. His Vietnamese wife found it rather cold but made sure we all had supplies of hot chocolate. It was lovely to be back on my journey despite the rain and great to spend bonus time with my son. As the sun set, we moored up at Iffley lock and walked into the village for
supper. 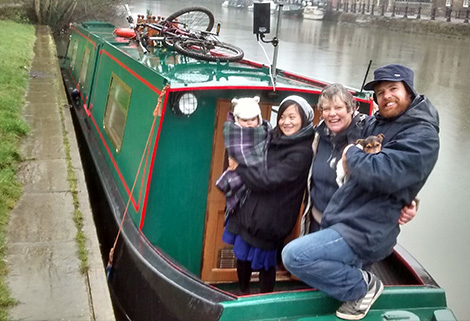 I was very lucky that my week off had been dry and the current of the Thames had not been strong. However, by the next day the rain had changed that and yellow boards on the locks indicated that current was increasing. By the time we reached Osney lock, the last one on the Thames before we needed to turn off and on to the Oxford canal, the boards were red, which means strong current, moor up immediately.

What should I do? If I didn't get through today it could be a week before the water drops, or even longer. Friends are scheduled to meet me in Oxford and lock closures further on mean that I need to get onto the more benign canal and away from the mercies of the river. Also, we had only half a mile to go before the turnoff. I made my mind up when a small riverboat, the only other moving craft we'd seen all weekend, joined us in the lock. If he was up for it, so was I.

The current was very strong as we left the lock and I bravely left the driving to Stephen. Even with high revs, Therapy struggled to move forward in the current but we carefully and patiently pushed on.

We could see a low bridge on our right and the small channel we needed to steer down. The water level was high and the current flowing very fast- would we even make it under the bridge? We needed to go through in the centre to avoid knocking the equipment stored on the roof.​ I feel sure that my orders, such as "no steer, left" and "quick, put her in reverse" did nothing to help, but Stephen, with the bravado of a young man who had never driven a narrow boat before, took her successfully through and out of the raging current of the Thames, suffering only a telling off from a resident boat owner for going too fast. 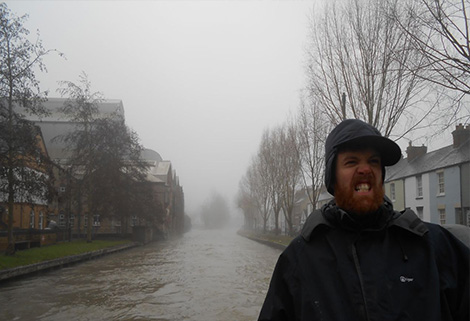 But now ahead of us was an even lower bridge, apparently one of the lowest canal bridges in the country, I was later told. We ducked our heads to avoid losing them and groaned as the precious bicycle on the roof was scraped and thrown about by the rafters. But we were off the Thames and onto the gentle Oxford canal. The bike had a buckled wheel and broken breaks, but the journey will go on!

We moored up close to the railway station where I walked my hero son and his family to catch their train to Gatwick airport from where he would fly back to Berlin. My voyage has resumed and I'm looking forward to travelling with friends through Oxford tomorrow and further north to see where our adventures will take us.