In mid July 1967, the Nye family set off on their summer holidays which, since 1964 had been a trip up the Thames to Lechlade by boat, and then a return trip. The first two of these holidays were in a hired boat from T.W. Allen and Sons of Molesey. In the spring of 1966 a small windfall allowed us to get a 16 foot “Rutland” cabin cruiser which we again took up the Thames and back. I remember hearing the winning goal of the World Cup on a Ferguson transistor radio outside of Sunbury lock.

My dad had a few extra days to add to the summer holiday in 1967 and had the idea of introducing us all to the rest of the inland waterways system via Dukes Cut and the Oxford canal. This was pretty much the first I'd really heard about the canals, and it interested me. Turning into Duke's cut and the really strange lock (that was then known as Shuttleworth's) got me even more curious. I was ten, and had my first glimpse of something that would, a year later, be considered for remaindered status, only scraping into the classification of being a “Cruiseway.” I remember walking along a narrow, sloping and potholed towpath from Dukes to Kiddlington Green lock, taking in the area and the peace, which was something I really needed (even then) in the run up to the dreaded Eleven Plus exam. That fascination with the approaching onset of dereliction has stayed with me over the years, and I can't help feeling sorry for buildings and engineering works that have simply been left, as many of the lock houses on the Oxford had been. I have it noted, in the diary I kept, that a lengthman allowed my brother and I to look inside the disused house at (I think) Hardwick lock. I also remember seeing the house at Nell Bridge lock all boarded up. 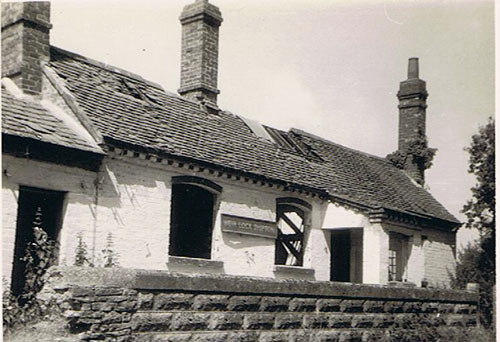 Of all the disused and crumbling buildings, it was the house at Shipton Weir lock that caught my attention. Unlike the others, it was a bungalow of rather nice proportions that, when I let my thoughts run on, I could have imagined living in. Given that nobody was there to grant permission, I took a look through the open, the kitchen and main room, losing myself in thinking of how the place must have looked when occupied. Later research tells me that the house was last used to live in before I was born, which would account for its poor condition. My thoughts and musings on that day were cut short by my being called back to the boat to move on.

I don't remember us stopping long anywhere along the route to just dawdle and take in the atmosphere of what could very soon have been gone forever. We just moved and worked our way to the destination that was being aimed at, so the glimpses that I did get have stuck in my mind as stolen moments to be treasured. I never talked to anyone about them at the time, partly because I doubt anyone would have understood but also because they were rather private and I wanted to keep them as exactly that. The travelling was pretty good though and, at the time, you could be travelling for a whole day and perhaps see just one other boat on the move. On the day we went through the famous Fenny Compton “tunnel” we had the slight misfortune of meeting our “only boat of the day,” this being a seventy foot ex work-boat that a troop of boy scouts had been let loose on under the able direction of their Akela, Skip, or whatever. The scouts were a bit unruly and the leader just a bit on the inept side. Our little plywood boat would have stood no chance if it had been hit, but this didn't seem to worry the steerer and leader of the scout pack who simply told my dad that everything was under control as he passed with barely a sheet of toilet paper's thickness between it and us. What my dad said to the guy in reply is not printable in a respectable publication.

Eventually we got to Napton, and the very interesting engine house arm that I'd really wanted to walk the length of but was vetoed for some reason or other. We stopped there for a day before returning the same way as we'd come, and thence to the Thames, to Lechlade and back home to Kingston. The impression the Oxford Canal left on me has been lifelong. Every time I see a derelict building I can't help wondering what was there and attempting to reconstruct it in my mind's eye. I wonder what the tunnel at Fenny Compton looked like when it actually was a tunnel. I have only recently found out that there was a house at Aynho Weir lock, a very pretty one as well. The strongest memory is of that house alongside the octagonal chamber of Shipton Weir lock though. It is long gone now of course, but I feel permitted to re-incarnate it in my fictional writing, all of which has Canal water running through its veins.

a lifetime of love

The summer of 1967 has gone down in history as the one where counter culture became mainstream, happenings, love-ins and various dubious substances were used with gusto and the world was changing forever. Whilst a lot of people dispute it, I do believe that the period was special for a lot of reasons. It was also special to a somewhat stressed ten year old me as I stood inside a disused bungalow and slowly fell in love. Not with a person, but with the inland waterways of the country that I was born in. The Eleven Plus, and me messing up on it good and proper, is a distant and disturbing memory. The canals have thrived and that last bit makes me a happier person. ©2019 Michael Nye.